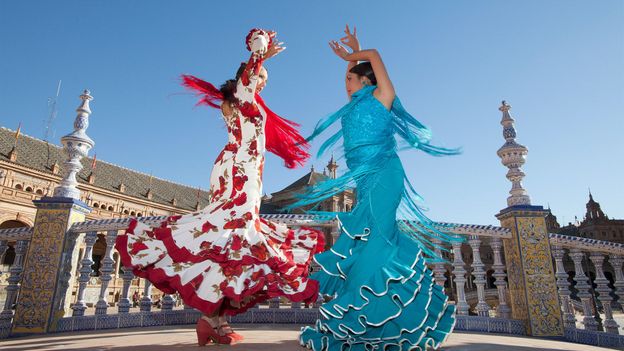 Why flamenco is in danger of disappearing

Hard-hit by pandemic closures, Spain's flamenco venues struggle to survive long enough to reignite the art form.
Flamenco's trifecta of guitar music, vocals and dance ranks among Spain's most famous art forms. But in the country of its birth, this centuries-old craft that unites elegant physicality and raw human emotion is in danger of extinction.

Spain's tablaos – traditional flamenco venues named after the wooden platforms upon which performers spin, sing and strum – were particularly hard-hit by pandemic lockdown restrictions. In tablaos, spectators rub shoulders at tightly spaced tables and performers remain close enough to maintain an electric connection to their audience, one that encourages improvisation and turns flamenco into a nearly collaborative act.

The unique environment that fosters flamenco, though, presents serious challenges in the time of Covid-19. Shuttered for extended periods, the majority of Spain's tablaos remain empty.

According to Juan Manuel del Rey, president of the Spanish Tablao Association, tablaos employ 95% of the flamenco dancers in Spain. Before the pandemic, the country's 50,000 yearly shows accounted for all but 5% of the world's flamenco performances. Without tablaos, flamenco is losing its stage to the world.

Because tablaos don't have a specific license that recognise them as cultural providers, they're unable to receive needed support from the Spanish government, leaving both venues and performers scrambling for survival. A few venues have opened with limited capacity one or two nights a week, but many remain closed or have already closed permanently.

It's not just the financial implications jeopardising the future of the form. Tablaos were designed to bring audiences and performers together, and without that connection, many flamenco artists struggle to maintain the fire that fuels flamenco's signature passion.

To see deep emotions embodied in music and dance is, for many, the power of flamenco. In an age of global uncertainty, the art form remains as relevant as ever. If it can find a way to survive.
#COVID-19  #Covid
Add Comment