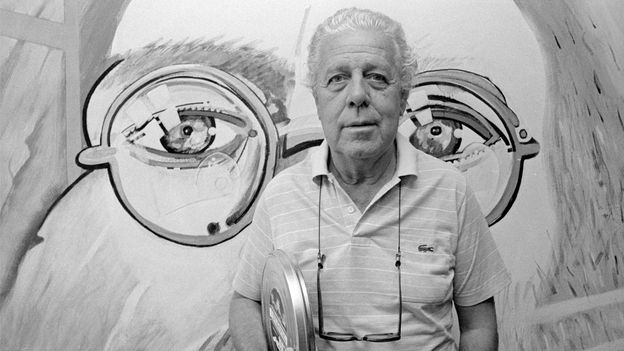 In his centenary year, Luis García Berlanga is receiving a renewed burst of attention at home. Why isn't he better known outside of Spain, asks Thomas Graham.

There's some debate over how it happened. It might have been after the screening of The Executioner, which satirised capital punishment in Spain, at the Venice Film Festival in September 1963 – or it might have been after Welcome, Mr Marshall! (1953) lampooned Spanish hopes for a slice of the US money destined to rebuild Europe after World War Two. In any case, one of the ministers of Spain's then dictatorship reported the latest irritation from the director Luis García Berlanga with the words: "Of course, Berlanga is a communist." To which the dictator Francisco Franco replied, "No, he's something worse: he's a bad Spaniard."
This little anecdote delighted no one more than Berlanga himself. For the duration of the dictatorship, the director made films that were out of step with Spain's cultural mores and reverence for family, church and nation. Franco was right: Berlanga wasn't a communist. If anything, he was an anarchist. But even that probably involved too much imposed discipline for someone who has a biography entitled, approximately: Welcome Mister Screw-Up: Chaotic Memories. 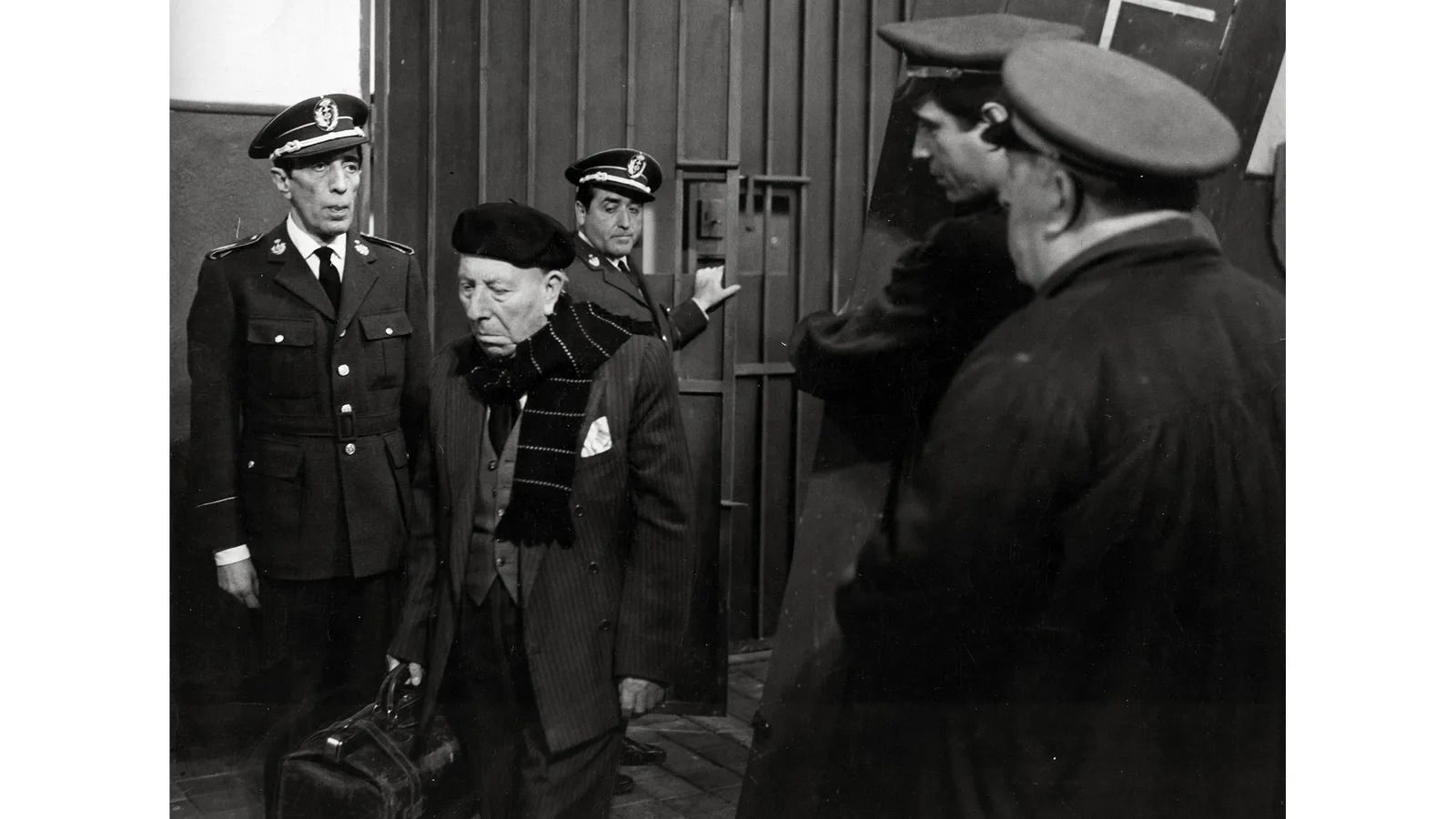 One hundred years since his birth in 1921, Berlanga is getting a renewed burst of attention in Spain. He died a little over 10 years ago, having lived through an extraordinary period of Spanish history. As a teenager, he fought in the Spanish Civil War on the Republican side; during World War Two, he volunteered for the Blue Division, Spanish soldiers sent to fight for the Nazis on their Eastern front, apparently to save his imprisoned father from the firing squad. Where other artists went into exile, Berlanga stayed in Spain throughout the dictatorship, and then into the transition and the democracy of Spain today. The country transformed during his lifetime.

From 1951 until the turn of the century, Berlanga made 17 feature films, a number of them with Rafael Azcona, one of Spain's great screenwriters. Berlanga tended to play down their importance, insisting they were comedies. In fact, though they were, they were the films of an auteur, too. Critics and directors in Spain today see his work as fundamental to Spanish cinema. The great contemporary Spanish film director Pedro Almodóvar described Berlanga and Luis Buñuel as the two masters from whom all Spanish films derive. And for anyone on the outside, each Berlanga film is a porthole into a period of Spain, and feels like a glimpse of something Spanish – in the same way, perhaps, that Monty Python strikes others as terribly British.

Asked what makes Berlanga a great director, Miguel Ángel Villena, Spanish journalist and author of a recent biography, points to the way he links the universal and the local in his films. The Executioner is an example. It's a comedy of manners about a man, frustrated by his inability to find his own house, and therefore a wife, who ends up becoming an executioner for the perks of the job, hoping against hope that he never actually has to kill anyone. "It was filmed in 1963, in the middle of Franco's dictatorship," he tells BBC Culture. "That year they shot a leader of the communist party in Spain. So this is a film that is centred on the Spain of the time, against the death penalty. But it's also a universal parable of the efforts humble people have to make to get a flat. The Executioner is about the fight for life, and for a place to live." 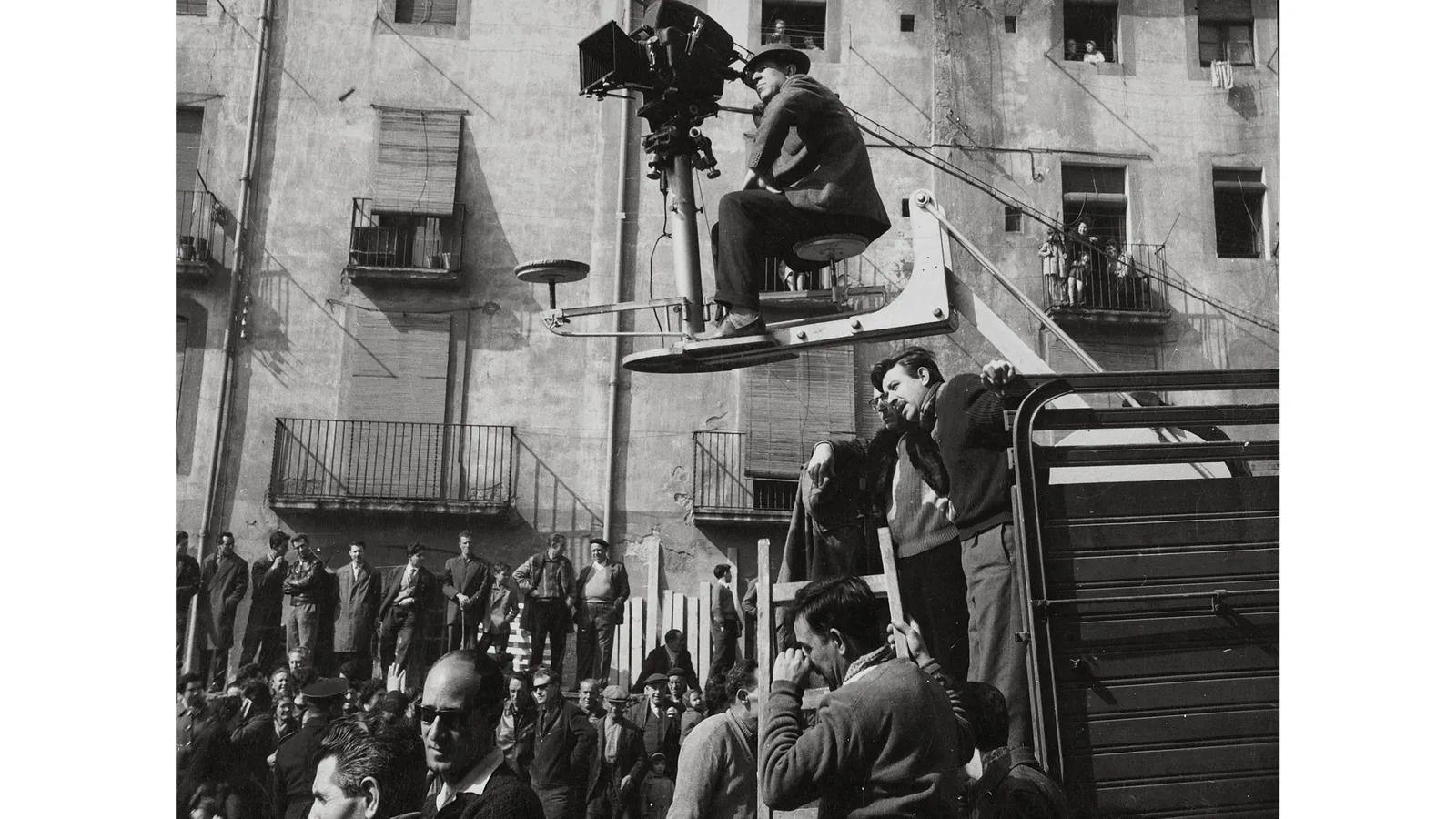 With films like this, Berlanga was constantly in scrapes with censors during the dictatorship. Most of the films he made during that time saw significant changes, while others never went beyond scripts. But his style of satire probably saved him from worse. Dark and anarchic, it spared no one. Plácido, for example, was based on a real event in which a small town's grandees each adopted a poor person for Christmas Eve. It mocks the false piety of the Catholic bourgeoisie – but the grubby, grabbing poor get just as much ridicule. There's none of the moral clarity of a more political filmmaker. Instead, everyone is compromised and conniving but sympathetic in some way, too. "Nobody was essentially good or bad, which diluted, or rather, distributed the critique," Dr Lucía Tello Díaz, a professor, film critic, director and scriptwriter, tells BBC Culture. "And humour is the best tool against censorship: in the cinema, truths spoken with humour seem less dangerous."

Berlanga's signature as an auteur – what makes his films so recognisable – is the combined use of crowds and long takes. In many scenes, there is a chorus of actors who barge into the frame whenever they can, interrupting one another constantly in pursuit of their own ends. The result is cacophony, and Berlanga tended to play up the chaos on his film sets. But in reality, the process was technical and minutely choreographed. "His mastery of the long take is a proven fact," says Tello Díaz. "He could be compared with Andrei Tarkovsky – with the advantage that Tarkovsky's long takes have been analysed ad nauseam, whereas those of Berlanga are yet to be discovered.”

This mastery of narrative and technique, deceptively lightened with humour, is what leads Spanish critics to speak of Berlanga and Buñuel in the same breath. Which makes it strange that, while Buñuel is well-known around the world, Berlanga is mostly unknown outside of Spain. His films were screened at international festivals at the time of their release, and even won some prizes, so it is not that they were critically unappreciated. But somehow they didn't stick, and with time they fell away from memory. 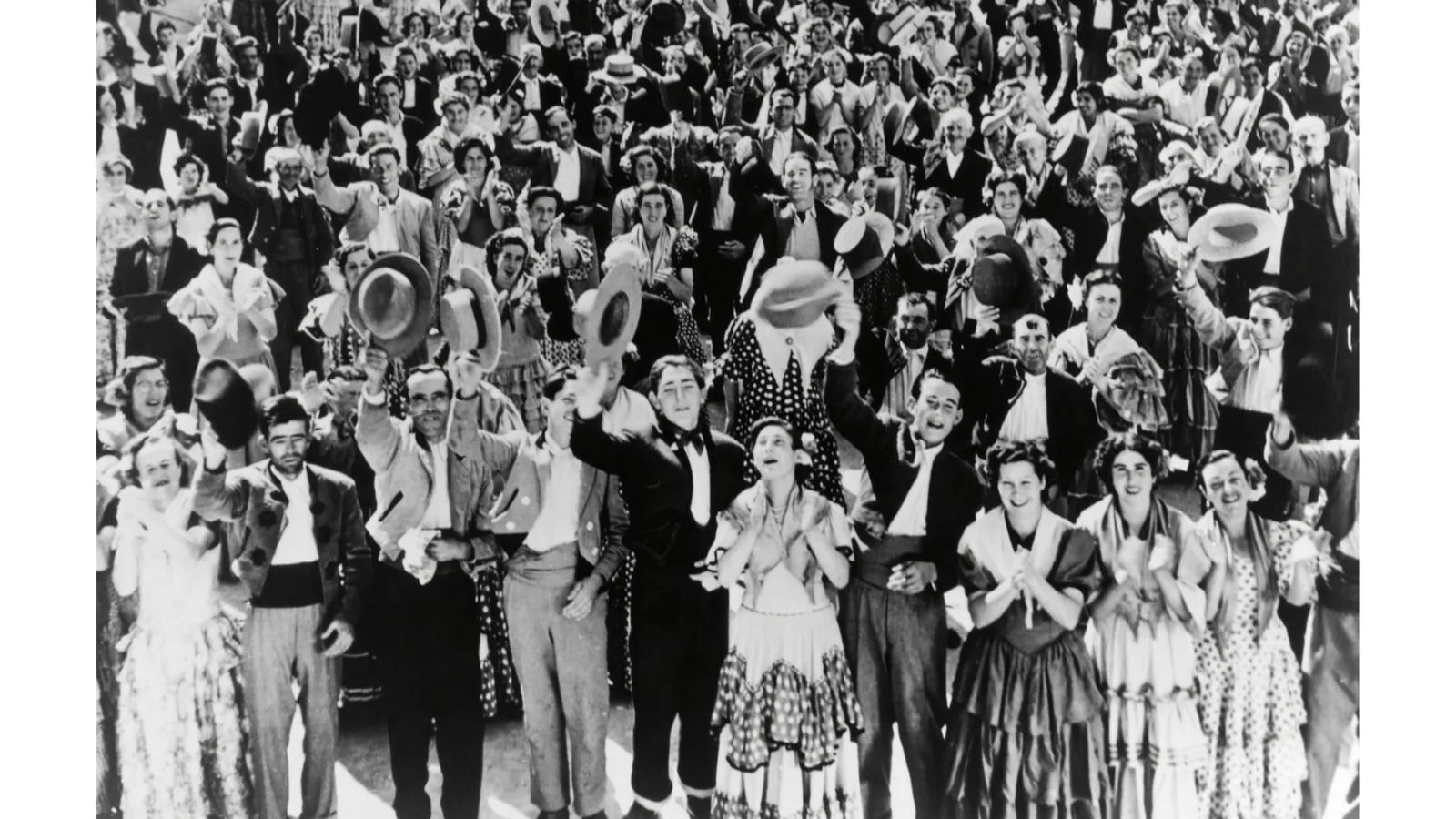 Apparently chaotic crowd scenes, such as in Welcome Mr Marshall, were technically complicated and carefully choreographed

There is likely a very particular reason for this, and it relates to the long takes and the chaotic chorus of actors so often employed in Berlanga's films, which present a unique challenge for subtitling or dubbing. This isn't Ingmar Bergman's The Seventh Seal, with Death and a knight politely taking turns talking over a game of chess. The dialogue in Berlanga's films is a dizzying free-for-all. "It seems like an unimportant point, but it's crucial," says Villena. "It's a challenge even for us Spaniards, with all these people talking at once."

More broadly, though they touched on universal themes, Berlanga's films centred on very local stories at a time when Spain was a lesser-known part of Europe. "The films are often very rooted in Spanish history, from what we have lived through at different times," Professor Begoña Siles Ojeda, director of the Luis García Berlanga Chair at the Universidad CEU-Cardenal Herrera, tells BBC Culture. She offers the example of The National Shotgun, which takes place on the estate of a decadent aristocrat, where a Catalan businessman is trying to grease palms and get the right politicians on board with his product. If you don't have some sense of late-Francoism and the archetype of the Catalan bourgeois industrialist, you'll only get half of what's happening.

And then Berlanga's films reach back further, too, working in the long tradition of Spanish culture. Siles Ojeda suggests the black humour, the constant presence of death, is reminiscent of the paintings of Goya and Velázquez. Berlanga's humour was also influenced by the sainetes of Carlos Arniches – one-act comic theatre pieces that were vernacular in style and often focused on working-class life – and inflected by the esperpento of Ramón del Valle-Inclán, an ironic literary genre in which reality was deformed and caricatured, often to critique society. "This tone was not an invention of Berlanga's – Cervantes, Quevedo, Valle Inclán and Mihura had already done it in literature," says Tello Díaz. "But Berlanga codified it like nobody else in cinema." 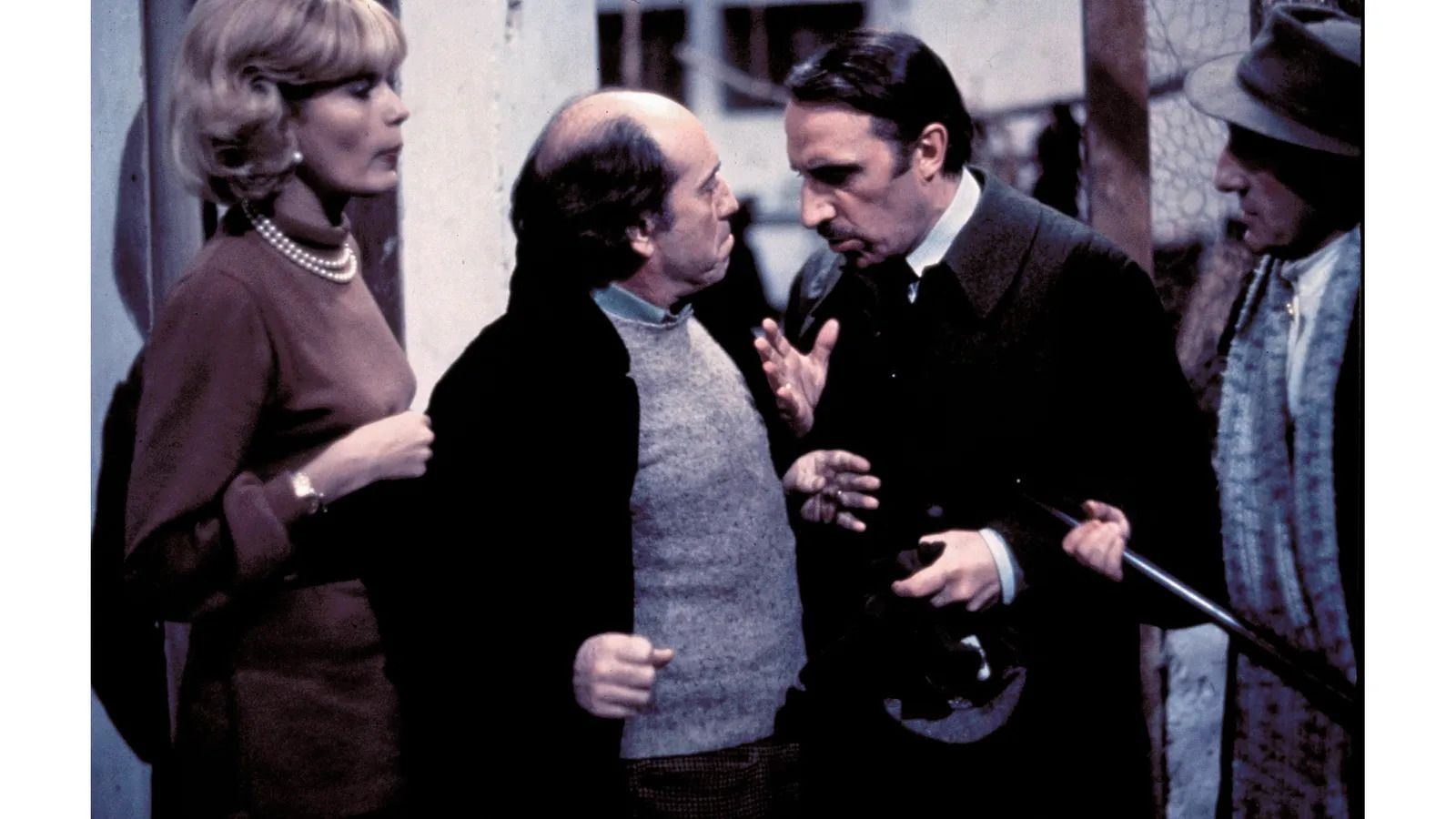 The films Berlanga made after the dictatorship, such as National Shotgun, were more colourful and exaggerated

All of these particularly Spanish elements of Berlanga's work go some way to explaining why he never quite found an international audience. But he didn't consistently find a Spanish audience, either. Many of his best films were made during the dictatorship but struggled to be screened widely in the country. In part, this was likely the work of the authorities. But his films could also be uncomfortable to watch. At the time, Spaniards were watching simpler kinds of comedy – ones that "didn't critique, didn't have an ironic and grotesque aspect," says Siles Ojeda.

Berlanga's domestic box-office hits came after the end of the dictatorship in 1975. The black-and-white of his earlier films gave way to colour; his humour, unchained from censorship, became exaggerated. Berlanga had always had a private obsession with erotica, and now it began to edge into his films in the form of, for example, the doddering Marquis Leguineche with his collection of body hairs in The National Shotgun. Not everyone enjoyed the shift. "Before, the humour was more roguish, elegant," Siles Ojeda says. "But when Spain started to live with a certain freedom, it became ever more vulgar."

That change was just one of the ways Berlanga reflected the shifts in Spain that he lived through. Taken together, his 17 films over the second half of the 20th Century portray a country through a transformative period of its history. That's why he's often seen as the great chronicler of Spanish society. And he is – but it's Spain as filtered through Berlanga, a history told through caricatures. "A caricature is an exaggerated portrait, but in the end it is still a portrait," says Villena. "If I was a history teacher in a school, I would show my pupils a few Berlanga films to teach them about the Spain of the 20th Century. Without a doubt."