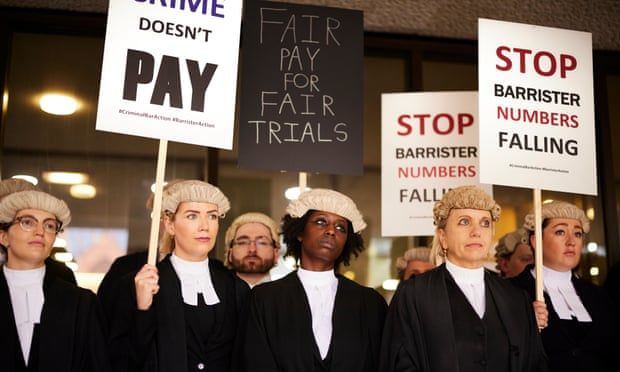 Why are criminal barristers in England and Wales striking and what will be the impact?

Criminal barristers in England and Wales begin a series of strikes over legal aid funding on Monday. We explain why they are striking and what the impact is likely to be.

Why are they striking?

The long-awaited criminal legal aid review (Clar), published in December, recommended a minimum increase in legal aid fees of 15%. Members of the Criminal Bar Association (CBA) say that is too low and want 25%.

Junior barristers can earn as little as £88 a day in court for a bail application and are not paid for preparation work or travel, meaning they can end up earning less than the minimum wage. The CBA says specialist criminal barristers make an average annual income after expenses of £12,200 in the first three years of practice, and that 22% of junior criminal barristers have left since 2016.

It is also aggrieved that the government did not respond to the Clar until March, when it launched a 12-week consultation on reforms, further delaying an increase in fees, which will not apply to the approximately 58,000 backlog of cases in the crown courts.

What will the action involve?

Walkouts will begin on Monday and Tuesday. Each week the number of walkout days will increase by one day until there is a five-day strike in the week beginning 18 July. From Monday, barristers will also not accept instructions for new cases. Additionally, continuing industrial action, which they began on 11 April, criminal barristers will also refuse to accept returns, where they step in to replace the original barrister at a court hearing that the latter can no longer attend.

What impact will the strikes have?

Cases will have to be adjourned/postponed, exacerbating the backlog in crown courts, which stands at about 58,000, little changed from six months ago despite the lifting of Covid restrictions. Last year, a parliamentary committee blamed the backlog on the legal aid budget being slashed by 40% in less than a decade.

Is there a precedent for barristers striking?

What is believed to be the only previous strike in the bar’s history took place in 2014. It was called off after a day and a half when the government suspended planned legal aid cuts.

What does the government say?

It says less than 50% of CBA members voted in support of the option likely to cause the most disruption – no returns, no new instructions and strikes – although, in total, 81.5% of voters backed one of the three options on the ballot sheet that included strikes. It adds that it is trying to introduce a 15% increase in fees by the end of September, which it says would mean a typical criminal barrister earning about £7,000 extra a year.