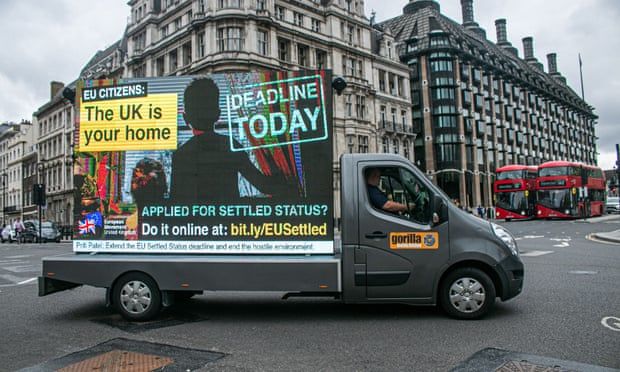 Some on social media claimed that it meant 9% of the UK’s population of 67 million was now made up of Europeans.

But number crunchers at the Office for National Statistics (ONS) and the University of Oxford Migration Observatory have said the exceptionally high number of applications is not a measure of population, and could include millions not living in the country at the moment.

The ONS says its “best estimate” is still that there are 3.5 million EU and European Economic Area (EEA) citizens living in the UK, closer to the original number that gave the EU citizens’ campaign group the3million, its name in 2016.

The number could include millions who do not live in the country who may be taking out an insurance policy against high visa fees in the event they want to return to the UK in future, the ONS said.

A Belgian national who grew up in the UK but left in 2018 told the Guardian he had applied just to ensure he could continue to visit his mother visa-free.

“Our latest data, using information from the Annual Population Survey (APS), shows that in mid-2020 there were about 3.5 million EU citizens living in the UK, a lot smaller than the 6m applications for the EU Settlement Scheme,” said Jay Lindop, deputy director of the ONS Centre for International Migration in a post on the ONS website.

“The assumption that there are more EU nationals in the UK than previously estimated is based on the belief that the number of people who have applied to the EU Settlement Scheme are all living and working in the UK right now. This is almost certainly not true.”

Under the rules of the settlement scheme, EU citizens and people from Norway, Iceland, Liechtenstein and Switzerland who had started living or studying in the UK by 31 December 2020 could apply.

Applicants living abroad relying on a historic five-year qualifying period also qualify for settled status provided their absence lasted no more than five years. Those in the country for fewer years could also apply from abroad.

In the run-up to the cutoff date for applications, immigration lawyers in the city were scrambling to get in applications from EU citizens living in faraway places including Australia because of postings abroad.

Rob McNeil, deputy director of the Migration Observatory, also pointed out that the scheme had been open for two years and could include many who have left because of the pandemic, particularly as government rules around periods of absence and eligibility were loosened to take account of Covid.

“Anyone who lived here in that time, even for short periods, could apply,” he said as long as their period of absence was within the rules. “That doesn’t mean they’re here now or will ever return.”

The application numbers may also have been inflated by repeat applications and by application from non-EU spouses and family members entitled to live in the UK with EU citizens under the old EU membership rules.

Because EU or EEA citizens have never had to register in the UK, the data relies on labour force surveys, passenger surveys and HMRC data which shows the working population and which will be updated by the ONS on Thursday.

But the ONS says that a more complete picture will not be available until September, when the next labour force survey is published, showing the nationalities of the population.
#Covid
Add Comment