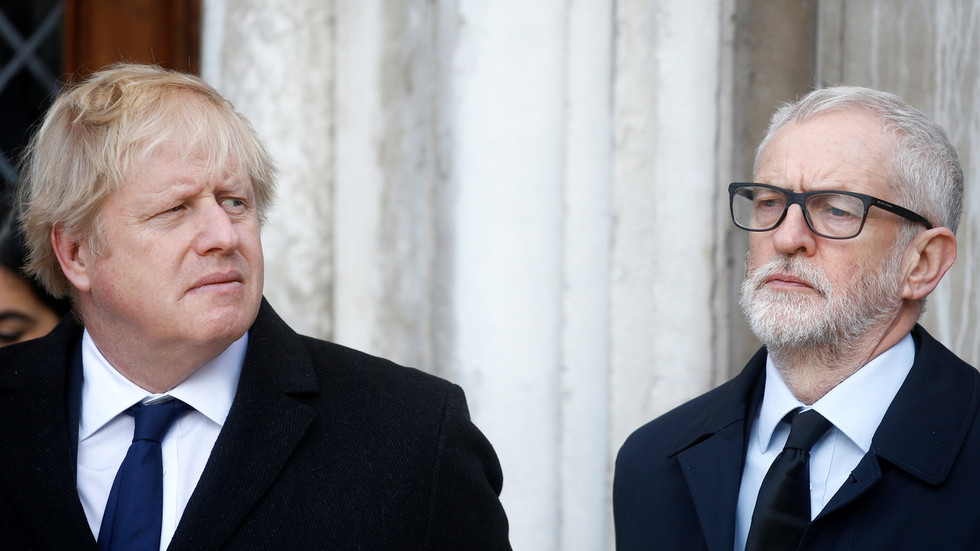 Who’s the bigger Russian agent, Boris Johnson or Jeremy Corbyn? Depends who (and when) you ask!

Britain’s election is fast-approaching and that can mean only one thing; the race is on to cast anyone and everyone in the role of secret Russian agent. One minute it’s Boris Johnson, the next it’s Jeremy Corbyn. Can you keep up?

Smearing your political opponents as Kremlin agents, witting or unwitting, is a surefire strategy to stir public anger and produce enviable levels of media attention and outrage, regardless of whether or not you have proof -and evidence doesn’t seem to matter. It’s the thought that counts, apparently.

The tactic has been tried and tested for decades across the pond in the US, but seems to be gaining more traction as a go-to campaign strategy in the UK in recent years, but perhaps never more so than in the lead up to the upcoming December vote.

This week, Comrade Corbyn is in the hot seat after he produced a leaked dossier which he claims proves PM Johnson put the NHS “up for sale” in trade talks with the Trump administration. This caused a big ruckus and deep displeasure within the Tory ranks… until suddenly, a report appeared, dubiously claiming that Corbyn had possibly been fed the leak by none other than… the Russians.

But shhh, don’t mention that the Russia connection was conjured up by researchers working for a US-funded think tank. That’s not important, wink wink.

So Corbyn’s the Russian agent here, right? Wrong. Do you not remember two weeks ago when Boris Johnson was Putin’s puppet? The PM was accused of deep, treasonous Russian allegiance, when he refused to publish a report probing allegations of Russian meddling in the Brexit referendum and 2017 general election.

By all accounts, the report by the Intelligence and Security Committee (ISC) doesn’t actually contain evidence of election meddling, but that didn’t stop the opposition and anti-Brexit Remainers from accusing BoJo of a pro-Russia coverup for deciding to shelve its release until after the election.

Fending off accusations of secret loyalties to Russia by mainstream media might be new for Johnson, but it’s certainly not Corbyn’s first rodeo. The Labour leader has long been subject to such insinuations. That’s what you get when you do silly things like questioning the role of NATO or asking for evidence before pointing the finger at Moscow for all manner of sins.

Just to clarify, the Russians are pro-Brexit, helped swing the referendum in 2016 and now Boris Johnson is helping them cover it up? Yet, for some reason they are also helping Corbyn defeat him by feeding him documents which hurt the Conservatives chances and might put the kibosh on Brexit altogether. Got it?

Can the British press decide whether Russia is helping Boris Johnson or Jeremy Corbyn?

I'm sure the Russians would like the know who they're meant to be backing this week.

It’s not just party leaders who get the Russian agent treatment, either. Johnson adviser Dominic Cummings has also been thrown into the role of possible Russian spy based on a three-year work stint in the country in the 90s, where he cultivated “relationships” according to one “concerned” whistleblower.

It might be Corbyn this week, but don’t get too comfy, Boris. You’ll have your day again.