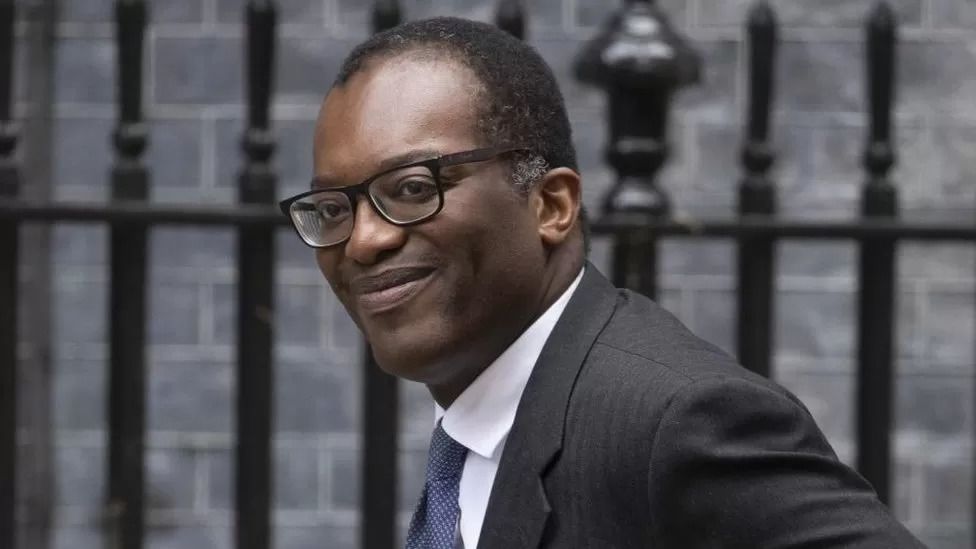 Who is Kwasi Kwarteng? New UK chancellor likes a challenge

Kwasi Kwarteng, a long-time ally and political soulmate of new prime minister Liz Truss, has been named as the UK's next chancellor.

He takes over at a critical time for the UK economy, with millions looking to him for help with soaring winter energy bills.

The decisions he makes in the coming days and weeks will have a huge impact on the country's future prospects, as well as on the Conservative Party's prospects of retaining power.

He will not be short of support from his new Downing Street neighbour. One friend told the Times Mr Kwarteng and Ms Truss were a bit like "Batman and Robin", adding: "They are both slight social misfits, amiable geeks, and have strong views which are in tune with each other."

Nor is he likely to be accused of lacking intellectual firepower or self-confidence. An Old Etonian, who became the first black Conservative cabinet minister in 2021, he has a double first from Cambridge University and a PhD in economic history. He is also a past winner of notoriously tough BBC quiz show University Challenge.

Family: Married to solicitor Harriet Edwards with one daughter

Mr Kwarteng's parents came to the UK from Ghana as students in the 1960s.

His economist father and barrister mother gave him a traditional Ashanti first name, meaning "born on Sunday", when he was actually born on a Monday. He told the BBC's Political Thinking with Nick Robinson podcast his parents stayed silent on the matter when he jokingly pulled them up on it.

The Church was a strong part of his mother's life and she was a lifelong Conservative voter.

He was just three years old when Margaret Thatcher came to power, and she would remain prime minister until his GCSE year. He has said in the past that his mother deeply admired Thatcher as someone "who wanted to rely on their own efforts" and has described himself as a "pragmatic Thatcherite".

He attended the exclusive private school Eton College after winning a scholarship there, and went on to graduate with a double first from Cambridge University in classics and history.

One well-known anecdote about the young Kwasi Kwarteng harks back to his admissions interview for Trinity College. The self-confident 17-year-old told the tutor, who had arrived late and hadn't conducted many of these interviews before: "Don't worry, sir - I'm sure you'll do very well."

He was part of the Cambridge team which won University Challenge in 1995, although he generated headlines for uttering a swearword after he buzzed in and forgot the answer to a question.

He has since questioned how much being good at quizzes "relates to anything in what people call 'real life'". 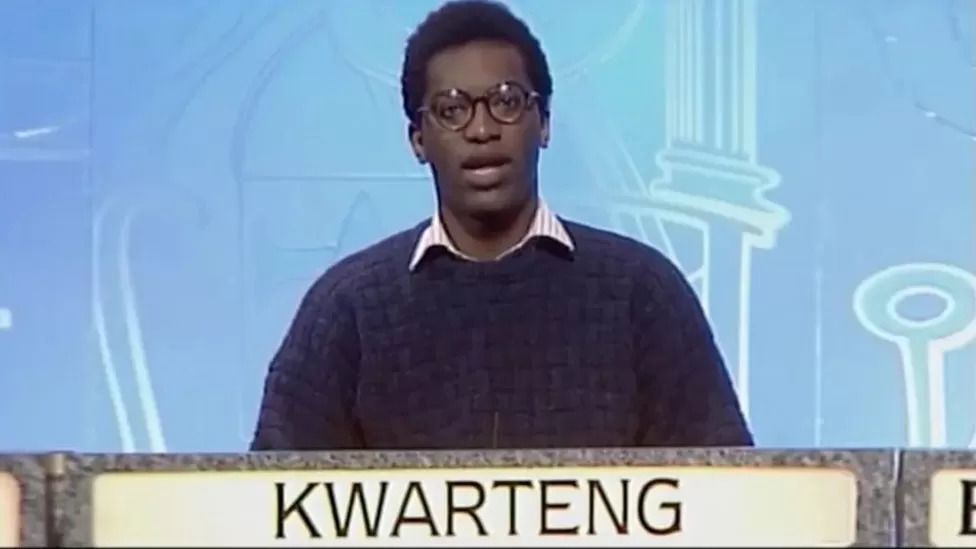 Kwasi Kwarteng appeared in the winning team for Trinity College, Cambridge, on University Challenge in 1994-95

He attended Harvard University in the United States on a Kennedy Scholarship, before returning to Cambridge University to complete a PhD in economic history in 2000.

During his second stint at the university, Tristram Hunt, the former Labour MP and now head of the V&A Museum, joked that then roommate Mr Kwarteng was "quite ungovernable and dishevelled".

He worked as a columnist for the Daily Telegraph and a financial analyst at banks including JP Morgan in the City of London and got involved in Conservative politics as chairman of the Bow Group think tank.

He has remarked that "politics was always something I was drawn to", and he made his first attempt to become an MP in 2005. He stood as the Conservative candidate for Brent East at the general election, but came third. There was also an unsuccessful run for the London Assembly in 2008.

However, he became part of the "class of 2010", a cohort of politicians entering Westminster for the first time that year. He was elected as MP for Spelthorne in Surrey and entered Parliament the same time as future colleagues Liz Truss, Priti Patel and Sajid Javid.

His maiden speech in the House of Commons came with some comments he described as "controversial", when he used the opportunity to criticise the former Labour government led by Gordon Brown and how it tackled the 2008 financial crisis.

"They have not once accepted any blame for what happened and they seem to think that we can just sail on as before," he said, also setting out the view that "wealth creation is the most important element in getting us out of this recession".

Although Mr Kwarteng was tipped to become the Conservatives' first black cabinet member as early as 2006, he spent eight years as a constituency MP before he became a minister.

He held weekly surgeries in his constituency and used his spare time to write several books and pamphlets on topics from Margaret Thatcher's final six months in office to the British Empire and its legacy.

He has argued that "the debate around Black Lives Matter and imperialism or colonialism has a cartoon-like view of history", and has said he thinks that view is true on both sides of the issue.

Mr Kwarteng also co-authored the book Britannia Unchained with several Tory MPs, including Liz Truss. In the 2012 text, they claimed: "Once they enter the workplace, the British are among the worst idlers in the world."

He has since distanced himself from this view. He told the BBC that the context of the pandemic, huge government spending on measures such as the furlough scheme, climate change challenges and Brexit mean that it is very difficult even to apply comments from five or six years ago today.

He backed Leave in the 2016 Brexit referendum, and in 2017 became a ministerial aide to the then Chancellor Philip Hammond, before becoming a junior minister in the Department for Exiting the European Union. 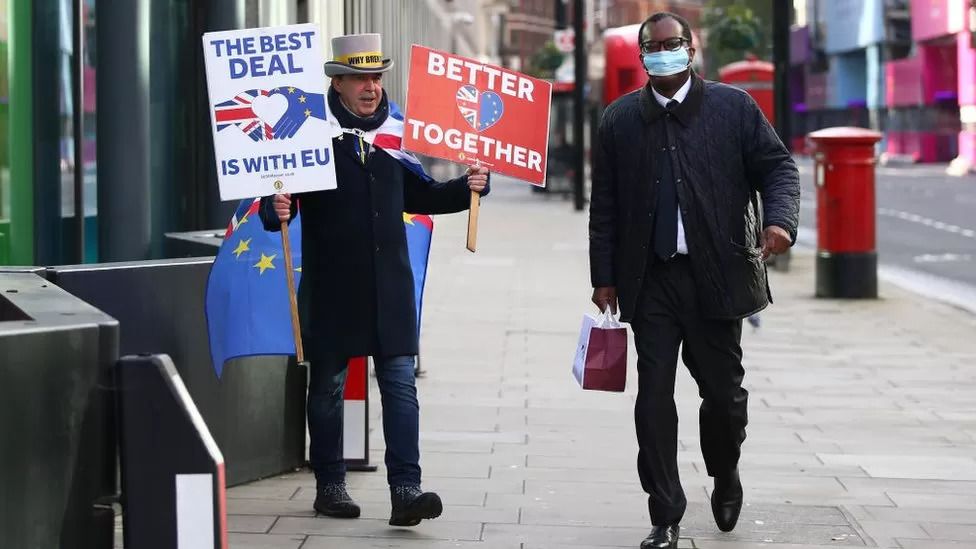 A promotion to minister at the Department for Business, Energy and Industrial Strategy followed, where he worked for more than a year before becoming business secretary 18 months later.

The ascent has been described as a "reward" for his backing of Boris Johnson during the race for party leadership.

The realities of the pandemic and the soaring cost of energy, however, have meant that his views on state intervention in industry have moderated.

"There's nothing [better] to convert someone from being a radical free marketeer to seeing the virtues of government action than making them an energy minister," he said at a 2019 Conservative party conference event.

More recently, Mr Kwarteng who is opposed to tax rises, has been focused on change and challenges.

From a pandemic job market, to net zero - the new top finance minister will now need to decide with colleagues how best to balance these issues with tackling bills and boosting the UK's domestic energy sources in a bid to protect British consumers and businesses.