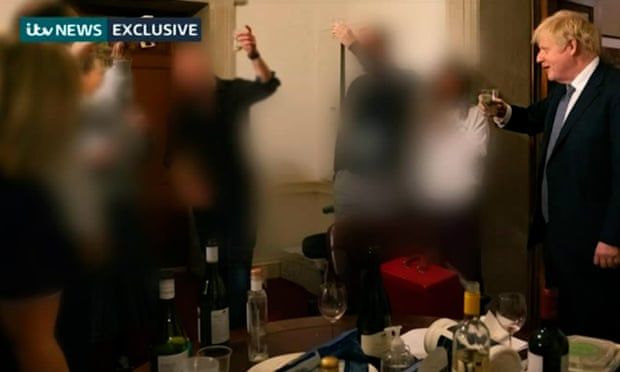 While Boris Johnson partied, I helped a child put on PPE to see his dying dad

NHS doctors were grateful to the public who followed Covid rules. The PM’s glass of wine has been thrown in all our faces, says palliative care doctor Rachel Clarke
Nine in the room, if you include the photographer. Eight glasses held high, a table strewn with bottles. Not a mask to be seen, not a hint of social distancing. They’re standing mere breaths apart. And there, holding court, centre stage – all grins and clownish mop of hair and crumpled, easy swagger – is Boris, good old Boris. Knees up, guard down, clearly raising a toast in a room full of alcohol. It all looks so very jolly.

Only at a second glance do you notice the red box that sits askew upon a chair, slung there like an afterthought. Then, in the foreground, a further revelation. As if designed to mock, tucked away between the bottles is that icon of the Covid age – a plastic pump dispenser of hand sanitiser. And how absurd it looks, how silly, this token nod towards curtailing infection amid the booze and grins and genial dissolution of another night of No 10 flicking the finger to the nation.

They were partying, to be clear, on the day Britain’s Covid death toll topped 52,800. Another 438 deaths added to the tally just hours before the revelry started. With the country yet again in lockdown, Covid felt old, so grim, and so much harder this time round. Still, you gritted your teeth and did what you must. Because, honestly, who in their right mind would want to risk infecting and killing others? The swaggerer-in-chief, that’s who, Downing Street’s serial carouser. His smugness, the nod and the wink of it all. Come on chaps, there’s rules and there’s “rules”.

Boris Johnson and his hangers-on are desperate to convince you the rules never mattered – and that anyway, you’re down there in the cesspit with him. For wasn’t it all, by this stage, just so tiresome? And weren’t all of us at it, this clandestine cavorting? Well. From a frontline perspective, in late 2020, when this picture was taken, the second wave was crashing down and the dying was just getting started. As Boris raised his glass and chortled, more than 60,000 of us still lived, still breathed, who, three months later, would be dead.

To NHS staff, it was always abundantly clear that the way you survive a pandemic is together. Collective compliance – this fragile, miraculous web of forbearance from an increasingly battered nation of stoics – was really all our patients had. Over and over, I would thank my stars for basic, selfless, public decency. Because by January 2021, the ventilators, ambulances and beds were running out again. People were dying who should have lived – in their beds at home before a paramedic could reach them, on hospital forecourts, on tarmac, in corridors, on ordinary wards because the ICU was full.

What we had to enforce at this time could feel barbaric. Once, at Christmas, I begged the powers that be to permit – please – a teenage boy to accompany his mother into the room where his father lay dying of Covid. The rules were so rigid – one deathbed visitor only – but finally, under duress, they relented. And so I sat, masked and gowned, in a tiny room with pastel wall art and obligatory NHS tissues, trying to prepare a boy the same age as my son for how very different his dad would look now to the man who’d been whisked away from his home by ambulance.

When you’ve helped children into PPE, pretending you can’t see as their lips start to quiver, you feel a boundless gratitude to the rule-respecting public. You know too well that what prevents a vertiginous death toll from rising ever higher is their millions of acts of individual sacrifice, from the mundane to the utterly harrowing. Rules, in short, have been the necessary curse of this pandemic. Hated yet obeyed, because we care about each other. We knew it at the time, we know it’s true today. And that glass of wine in the prime minister’s hand? It’s been thrown into the faces of us all.
#Boris Johnson  #Johnson  #Covid
Add Comment