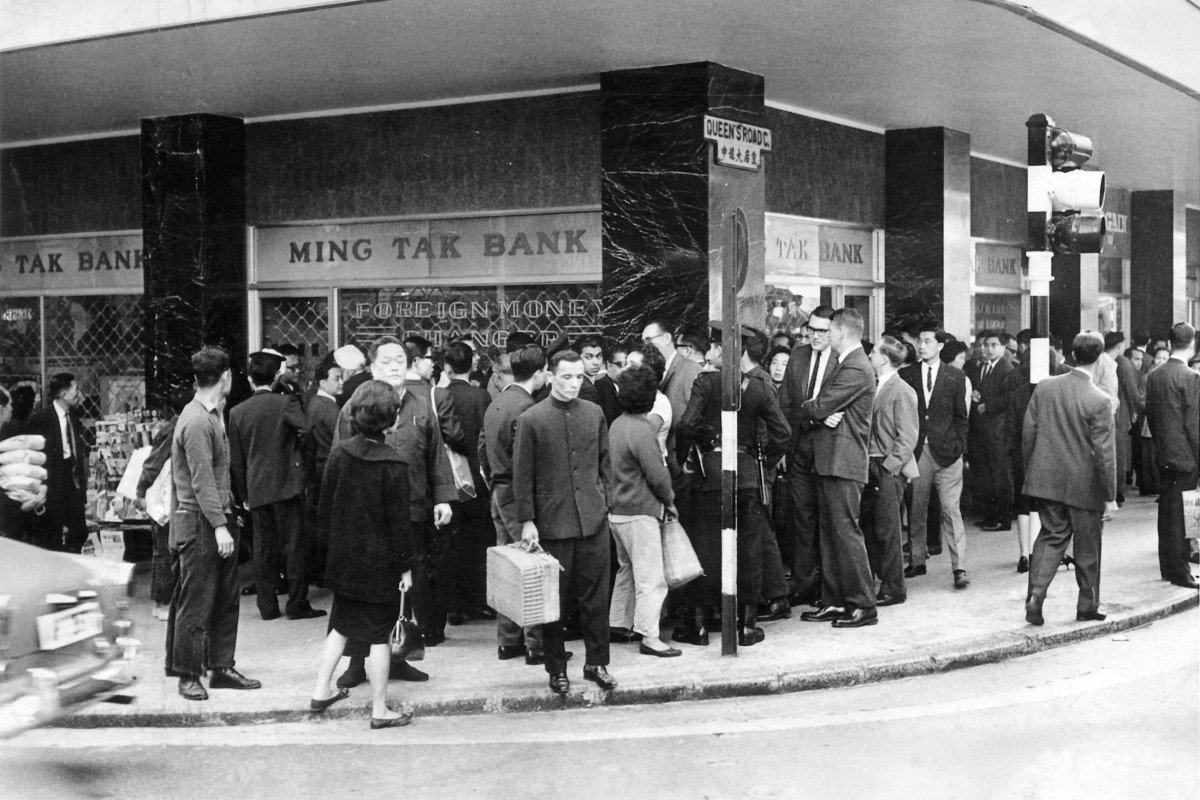 In 1965, a run on the bank owned by Poon Kai-kwong led to rumours of trouble at other Chinese banks. British pound notes were flown in and restrictions were placed on withdrawals, eventually restoring confidence
“There was a run on the Ming Tak Bank at the junction of Pedder Street and Queen’s Road Central and its branch in Nathan Road, Tsimshatsui, Kowloon, yesterday,” reported the South China Morning Post on January 27, 1965. It started “when several clients complained that their American dollar cashier’s cheques, issued by Ming Tak, were not honoured in the United States”, the story continued. “The bank, however, managed to pay their clients with current accounts and saving accounts on demand till late in the afternoon when it ran out of cash.”

The following day, the Post reported that the commissioner of banking, Leonidas Cole, had taken control of Ming Tak Bank and all public operations had been suspended.

According to a February 5 Post article, “it became apparent that the company could not save itself as a bank” and Ming Tak’s owner, Poon Kai-kwong, subsequently filed an application for a receiving order “of his own volition”.

“There was ‘some urgency’ in view of the fact that there were some thousands of depositors who, unless the Ming Tak Bank’s assets were liquidated, could not receive their money,” the article said.

After rumours that other banks were in trouble circulated in the colony, the Post reported “heavy runs on other Chinese banks”, including the Hang Seng Bank and the Canton Trust and Commercial Bank. However, John James Cowperthwaite, the colony’s financial secretary, was quick to reassure the public. “Hongkong’s banking and financial structure is sound; and is backed by ample resources,” he is quoted as saying in a February 9 Post article.

A day later, the Post reported that the government had implemented emergency restrictions on withdrawals from all bank accounts, limited to HK$100 a day per account, in a bid to ease a “critical” shortage of banknotes, while British pound notes were being flown in and would become legal tender.

“I ask you please to be calm and not make the present situation any more difficult,” entreated governor David Trench. “It is not money in its proper sense that may perhaps run short – we have ample financial resources here – but the paper notes which represent money.”

As confidence in the banking system was restored, the runs stopped. “The Colony’s banks experienced a normal day yesterday as Government lifted the emergency regulations,” reported the Post on February 17.

The pounds that arrived from London were not issued.

Ming Tak Bank did not reopen, though. “The bankruptcy of the sole proprietor of the Ming Tak Bank, with liabilities of over $12m, is believed to be the largest ever to occur in Hongkong,” reported the Post on December 9.
Add Comment