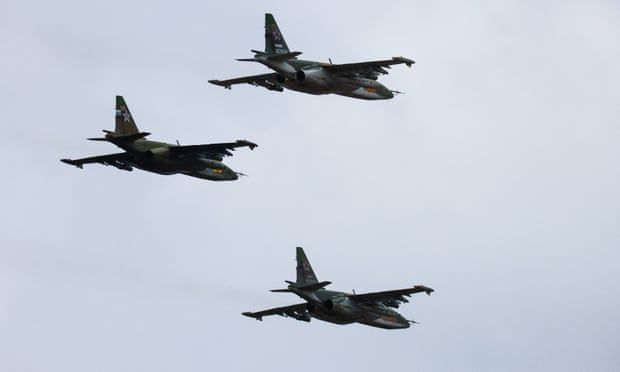 What more could the west do about Russia’s invasion of Ukraine?

Analysis: From a no-fly zone to sanctions, the options that are on and off the table

Russia’s invading forces have bombed civilians in Kyiv, Kharkiv and elsewhere in Ukraine in the past 48 hours, prompting fears of rising casualties and growing questions as to whether the west could step up military, economic or other efforts to help. Here are some of the options – and the risks.

After war broke out last week, Ukraine’s ambassador to the UK, Vadym Prystaiko, called for the west to implement a no-fly zone over his country, arguing that “people are dying as we speak”, and the idea has captured the imagination of many as the bombing worsens.

Western leaders have repeatedly said it would not be possible for Nato to enforce a no-fly zone over Ukraine because, in the words of the UK defence secretary, Ben Wallace, it would “lead to a war against Russia across the whole of Europe” as western jets would have to seize control of the skies.

But Tobias Ellwood, the Conservative chair of the defence committee, complained that Wallace should have not ruled the idea out so publicly at least. “This shows we’ve forgotten the rules of post-cold war statecraft by exhibiting weakness and failing to keep the enemy guessing – even if you’ve privately ruled the option out,” the MP said.

Boris Johnson, on a visit to Estonia on Tuesday, said the UK, in common with other western nations “will not fight Russian forces in Ukraine”. A doubling of British forces to nearly 2,000 in the Baltic country was “nothing more than defensive measures”, he added.

There has been no political will to let Ukraine join Nato, although that has left Kyiv to fend for itself now it is under Russian attack. A more realistic focus, said Prof Malcolm Chalmers from the Rusi thinktank, would be for Nato to “carry on reinforcing its eastern flank”, increasing the size of garrisons from Romania in the south to Estonia in the north.

Nato had already said it would deploy “thousands” of troops from its combat-ready response force to the territory of its eastern European members; the US alone had sent a further 12,000 troops. But that will do little to help Kyiv directly.

The US and UK supplied anti-tank weapons to Ukraine before fighting started. Once Russia invaded, many more including Germany, Sweden and the Netherlands followed up with anti-tank and anti-aircraft weapons. Yet to withstand the Russian onslaught, supplies will need to continue.

“The most important thing is to provide weapons the Ukrainians are used to operating – like handheld anti-air systems and lots of anti-tank missiles,” Chalmers said. Ukrainian forces will also need the basics – ammunition and fuel – and open supply lines, meaning logistics inside and outside Ukraine will be critical.

But a bolder plan to send Russian-made MiG-29 and Su-25 jets, of the kind familiar to Ukraine’s pilots, from Poland, Slovakia, Romania and Bulgaria collapsed this week. It is not clear how realistic the proposal was, but if the plan was to revive it, it could provide help to Kyiv’s beleaguered air force.

Experts predict, grimly, that although Russia’s advance on Kyiv and other major centres is slow, it is progressing. Mathieu Boulègue, from the Chatham House thinktank, said “unrestricted warfare” was coming with carpet bombing replacing precision strikes and civilian casualties likely to mount.

Food is said to be short in the east of Ukraine, while aid is backed up on the Polish border, taking 48 hours to get through. “Broadly, the neighbours of Ukraine have to prepare for a humanitarian disaster,” said Keir Giles, from Chatham House, adding that the situation required major donor efforts from governments and individuals.

Earlier on Wednesday, Johnson announced in the Commons that a Disasters Emergency Committee public appeal for aid for Ukraine had been launched, with the British government pledging to match the first £20m in donations.

The biggest step the west could take to hurt Russia’s economy is considered to be the blocking of energy exports. So far this has been resisted because of the damage it would cause for European nations reliant on the gas supply.

As much as $700m (£525m) of oil, gas and other commodities is thought to be bought by the UK, US and EU each day, powering the Russian economy and aiding the Kremlin. Russia accounts for almost 40% of the EU’s natural gas imports, with up to 65% in Germany and 100% in some eastern European nations.

But there are options to replace Russian gas, including sourcing more supplies of liquid natural gas from other nations such as Qatar. There could also be increased use of coal power, as well as Germany delaying planned closures of its three remaining nuclear reactors.

Sanctions on Russian banks and the country’s central bank are having the biggest impact on its economy. In an early sign of the damage, the Moscow stock exchange remains closed while the rouble plunged almost 30% on Monday after steps to freeze reserves held overseas by the Russian central bank.

Measures to exclude more Russian banks from the Swift international payments network are still being drawn up. But there are fears that casting the net too wide could have a knock-on impact for the global financial system, which has never seen a crisis like this.

Boris Johnson has announced new anti-corruption measures, including the imposition of sanctions on Russian oligarchs. But implementation has been slow and only nine individuals have been targeted by the UK so far, with the EU putting sanctions on far more.

The idea is that imposing financial pain on the Russian elite, who are seen as enabling Vladimir Putin’s regime and whose wealth is spread around the world in properties and business investments, will in turn apply pressure to the president himself.

There have been calls for a faster and a wider net to be drawn. Margaret Hodge, a Labour MP, urged the UK government to target 105 more oligarchs. “We are complicit in this and we are facilitating it by not tackling this,” she said.