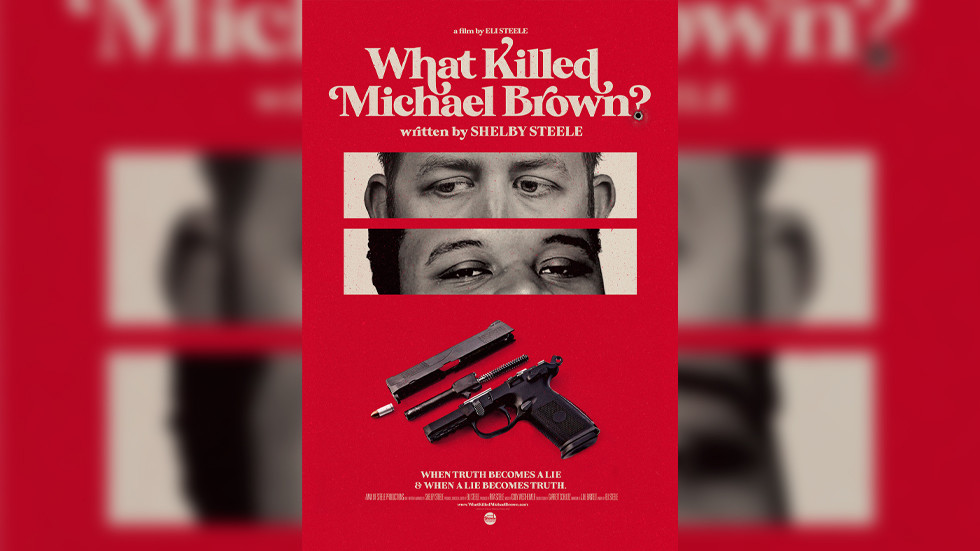 A new film streaming on Amazon uses the tragedy of Michael Brown’s death in 2014 to insightfully reveal the manipulations and machinations that distort modern-day race relations in the US.

‘What Killed Michael Brown?’ is the most important documentary of the year. The film, which is exquisitely directed by Eli Steele and gloriously written and narrated by famed conservative black intellectual Shelby Steele, takes a deep dive into the tangled web of race in America through the death of Michael Brown in Ferguson, Missouri in 2014.

From the get-go the movie jumps out at you, not with cinematic bombast, but with a subtle brilliance. The opening title sequence uses the same distinct font as Quentin Tarantino’s ‘Jackie Brown’, and in so doing lets viewers know it is unabashedly challenging popular myths.

This film is a searing, scintillating and staggering examination of race in America, but make no mistake – this is not some emotionalist screed or partisan polemic. It is a thoughtful, reasoned and measured commentary.

Shelby Steele is armed with an impressive background in civil rights, a towering intellect and a monumental mastery of language, which allows him to confidently march viewers through the maze and minefield of race without ever misplacing a step.

Steele frames the American conflict over race as a battle between ‘poetic truth’ and ‘objective truth’. Poetic truth is a distorted and partisan version of truth and is used by race hustlers and charlatans like Reverend Al Sharpton and former Attorney General Eric Holder to paint Michael Brown – who was shot by a police officer – as an innocent victim and noble martyr for the cause.

This poetic truth conflates the present with the past, which results in the tragedy of Michael Brown being transformed into a continuation of slavery’s violence and Jim Crow-era lynching by depraved whites.

The establishment media and racial activists embrace this poetic truth because their objective is coercion, not reason. This version of truth does two critically destructive things: it gives black people an identity through victimization, and it gives white people a way to assuage their racial guilt.

As Steele explains in the film, “white guilt became black power.” This dynamic sets up a vicious cycle where blacks use victimhood to exploit white guilt, and whites steal agency from blacks in order to assuage said guilt. Therefore, the learned helplessness of blacks feeds the self-centered, narcissistic paternalism of whites and vice versa.

Steele goes on to insightfully declare: “humans never use race except as a means to power… never an end, always a means.” This is contrasted by the vision of Steele’s working-class, minimally educated father who grew up under Jim Crow and fervently “favored character over race as a means to power.”

As seen in Ferguson in 2014 and in recent months all across America, racial anger has become ritualized and choreographed. Grievance is claimed without evidence, and protest encouraged with no good faith that it will lead to anything.

Whether it be Michael Brown, George Floyd or Breonna Taylor, these deaths are seen less as tragedies and more as opportunities.

The film highlights Al Sharpton as one of the more aggressive opportunists and as the epitome of the race grievance peddler. Reverend Al’s mendacious model is now used by Black Lives Matter and their ilk, who are just as intellectually and morally dubious as their duplicitous mentor.

Unlike the extraordinarily successful and morally impeccable civil rights movement led by Martin Luther King Jr., which exposed its opponents as devoid of moral authority, BLM and Sharpton are themselves morally bankrupt.

As the film points out, none of these opportunists is interested in the development of black people or communities, but in ‘justice’. And their definition of ‘justice’ is amorphous, ever-expanding and rooted entirely in emotionalism and greed.

Steele uses the immigrant-owned convenience store in Ferguson where the Michael Brown tragedy began as proof of the absurdity of the demand for alleged ‘justice’.

The mob wants the store owners to shut down for three days on the anniversary of Brown’s death and issues a whole host of other demands. The owners acquiesce, but it is never enough. Once one demand is fulfilled, a new and more egregious one sprouts up – until finally the mob is clamoring for the owners to literally give away their store to protesters.

Besides the movie’s robust intellectualism, it is also exceedingly well made and, like its soulful and melancholy jazz soundtrack, never loses its pace or rhythm.

It’s ironic that, though major corporations like Amazon are now emphasizing black artists, when those artists don’t toe the establishment line on race, they are told to sit at the back of the bus.

Thankfully, after much public pressure, Amazon has now relented and is allowing users to purchase and stream the film on its service. But this is not the first time – and it certainly won’t be the last – that mainstream gatekeepers have tried to silence truth tellers.

In conclusion, ‘What Killed Michael Brown?’ is mandatory viewing, because it is an intellectually vibrant, finely crafted piece of work that brazenly and bravely reveals the uncomfortable reality of race in America today. See it now.