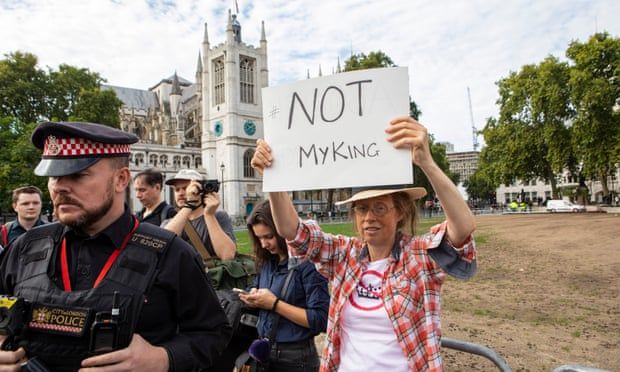 What is the law on the right to protest in the UK?

Amid concerns over the arrest of anti-monarchy protesters, we look at what is, and is not, allowed

Amid concerns over the arrests of anti-monarchy protesters at events related to the ascension to the throne of Prince Charles III after the death of the Queen, we explain the law on the right to protest.

What is the current law on the right to protest?

Everyone has the right to peaceful protest. While there is no specific right in law, it is enshrined in the rights to freedom of expression and freedom of assembly, protected respectively under articles 10 and 11 of the European convention on human rights, which was directly incorporated into domestic British law by the Human Rights Act.

Limitations to the right to protest in England and Wales were set out in the Public Order Act 1986 and this year in the Police, Crime, Sentencing and Courts Act (PCSC). There is also a common law offence of breach of the peace, and an offence of the same name exists separately in Scotland, where it is also a statutory offence under section 38 of the Criminal Justice and Licensing (Scotland) Act 2010. Northern Ireland has its own legislation governing protests – the Public Order (Northern Ireland) Order 1987, which includes conditions that can be imposed on public processions.

On what grounds have protesters been arrested and what punishment could they face?

Symon Hill, 45, was arrested in Oxford on Sunday on suspicion of behaviour likely to cause harassment, alarm or distress under section 5 of the Public Order Act 1986. The offence carries a maximum penalty of a £1,000 fine, but Hill – who said he was detained after shouting: “Who elected him?” about Charles – was de-arrested before leaving the police station.

A 22-year-old woman who was arrested in Edinburgh, holding a sign saying: “Fuck imperialism, abolish monarchy”, has been charged with breach of the peace. A man was arrested for the same offence on Monday after he was seen shouting at the procession accompanying the Queen’s coffin up the Royal Mile in Edinburgh. The woman who was charged is to appear in the sheriff court, where there is a maximum sentence of 12 months in jail and/or a £5,000 fine or, in vary rare cases prosecuted by indictment, five years imprisonment and/or a £5,000 fine.

Has the law on restrictions to protest become stricter?

In England and Wales the law was made stricter by the PCSC Act. The bill that preceded the act was criticised by civil liberties campaigners, parliament’s human rights committee, charities, academics, and two former home secretaries for being oppressive. While some concessions were made in the House of Lords following criticism, it was eventually passed. The most controversial elements with respect to protest were the widening of the police’s ability to place conditions on protests, including if they think they are too noisy.

The new act has been criticised for weakening the right to protest, and while it was not cited by the police in the above instances, Hill said that Thames Valley police initially said he had been arrested under the PCSC Act, before releasing a statement saying he was detained under the Public Order Act.

The government is now seeking to give police in England and Wales more powers to curb peaceful but disruptive protests though the public order bill, which has also been criticised.

Is there any other relevant legislation?

The Treason Felony Act 1848 appears to still be in effect, which means, technically, anyone calling for the abolition of the monarchy could be convicted of a criminal offence punishable by life imprisonment. In reality, it has not been deployed in a prosecution since 1879, and given that a YouGov poll earlier this year found that 22% of people in the UK support abolishing the monarchy, that is probably good news for the beleaguered prison system.