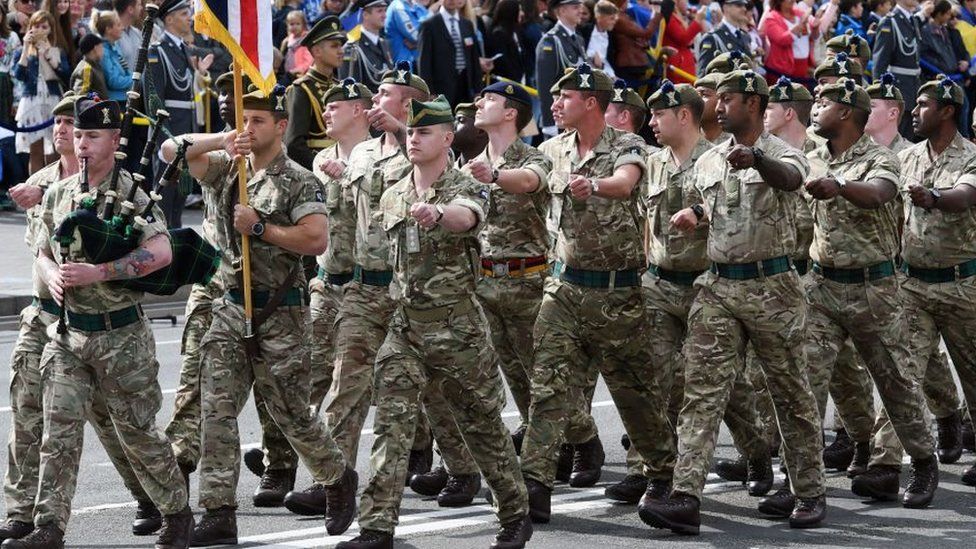 What is happening to the size of the Army?

The government has announced a reduction in the number of soldiers it plans to have in the Army by 2025, as part of its Integrated Review, examining "the long-term strategic aims" of UK national security, as well as defence, development and foreign policy.

Although the number of soldiers will be falling, the UK's annual defence budget will be £7bn a year higher than previously committed to, by 2024-25. 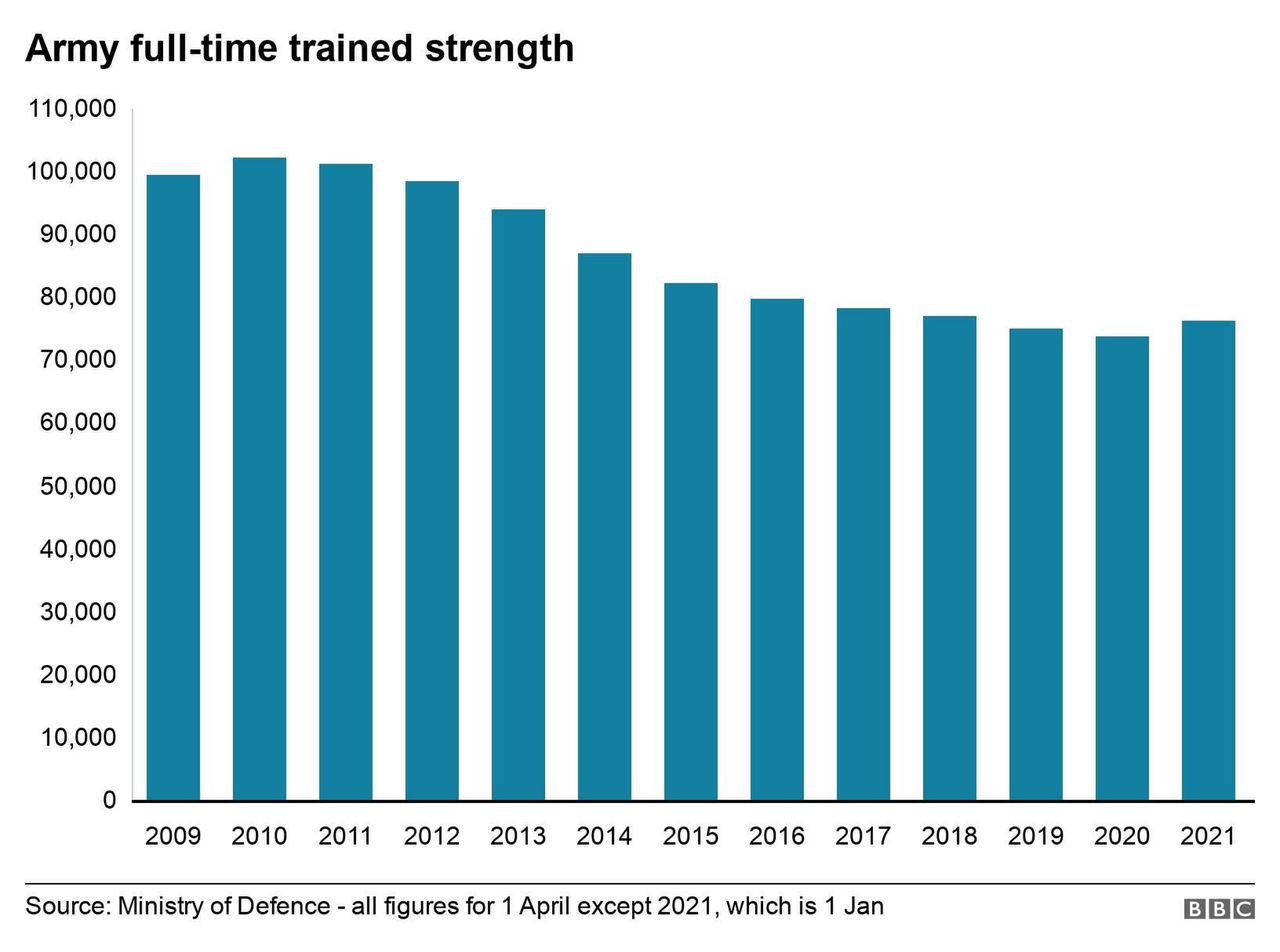 It had been widely reported that the government would be announcing a cut of 10,000 to the size of the Army, but that is not quite what is happening.

What is being cut is the target for the number of fully-trained people in the Army, which is called the "workforce requirement".

Full-time trained strength is the number of soldiers who have completed both their general, basic training and a second phase of specialised training for a specific role.

But the Army is not currently meeting its target - there are actually only 76,350 such soldiers in the Army, which is almost 6,000 short.

So the Ministry of Defence is already well on the way to getting down to its new target.

"We've seen reductions in forces all over Europe as requirements for expeditionary responses have changed," Fenella McGerty, from the International Institute for Strategic Studies (IISS) told BBC News.

She added that it would enable the government to put a higher proportion of defence spending towards things like technology and research and development.

But BBC Newsnight's defence editor, Mark Urban, told BBC Radio 4's PM programme that the reduction could have an impact on the type of operation the British military conducts in future.

"If you were going to try and do an ongoing commitment as Britain did in Helmand [in Afghanistan] for all those years of about 10,000 rolling over from one brigade group to the next...it would be extremely difficult with a force that size".

What has happened to defence spending?

From 2010 to 2017, annual defence spending fell by £6.6bn in real terms (after factoring in rising prices over this period).

That was a cut of 14.6% compared with the 2009-10 Budget, according to an analysis of government figures by the Institute for Fiscal Studies.

Since the 2016-17 financial year, however, annual defence spending has increased by £3bn in real terms.

The extra funding promised as part of the Integrated Review means that by the 2024-25 financial year, the defence budget will be £51.7bn in cash terms, which is £7bn more than previously planned. 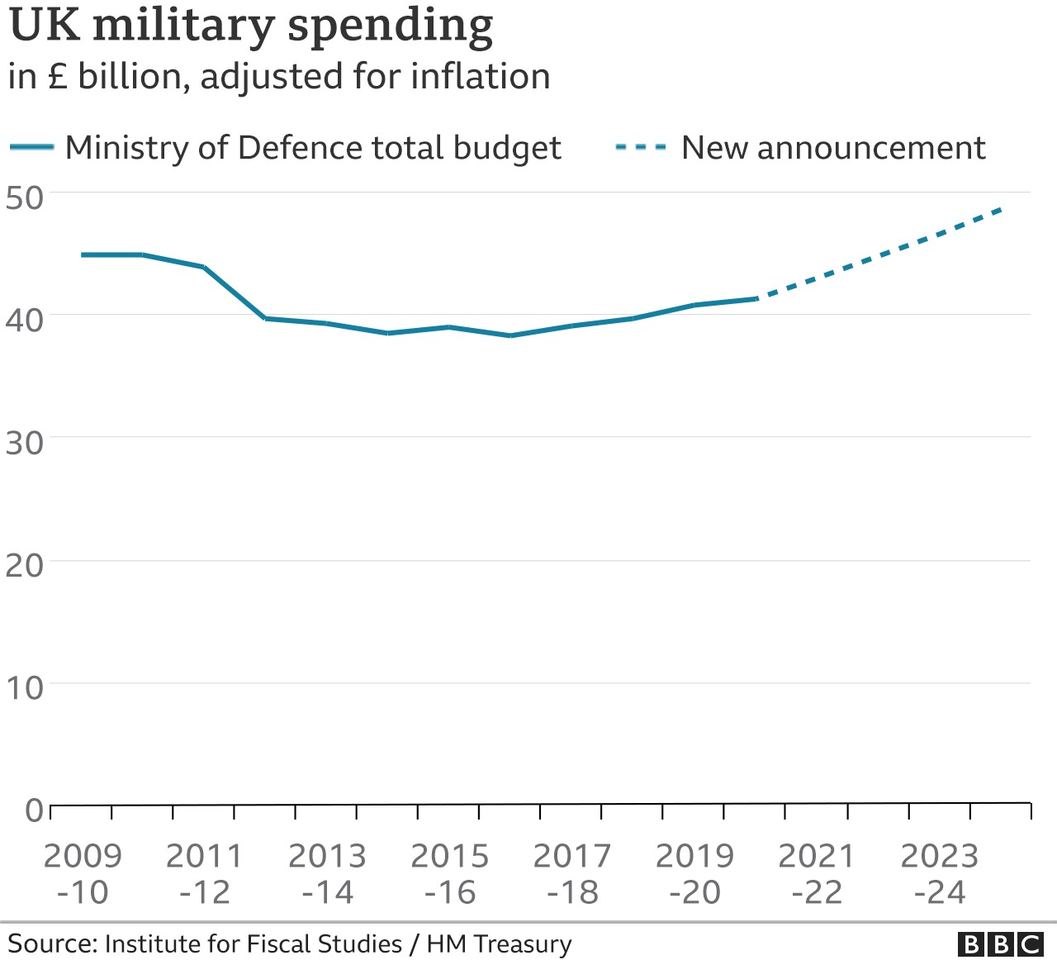 Trevor Taylor, of the Royal United Services Institute, said: "This was an unexpectedly generous settlement that sent a signal that the government intended to maintain defence at a higher rate of GDP than 2% for several years at least."

GDP stands for Gross Domestic Product and is the value of everything produced by the economy in a year.

How does the UK compare internationally?

An IISS study attempts to rank the world's biggest defence budgets. It puts the UK fourth behind China, Russia and the United States.

The USA spends more on defence than all of the other countries in the top 10 combined, with a budget of $738bn (£557bn) a year.

But when defence expenditure is analysed as a proportion of gross domestic product (GDP), the UK falls to seventh in the world. 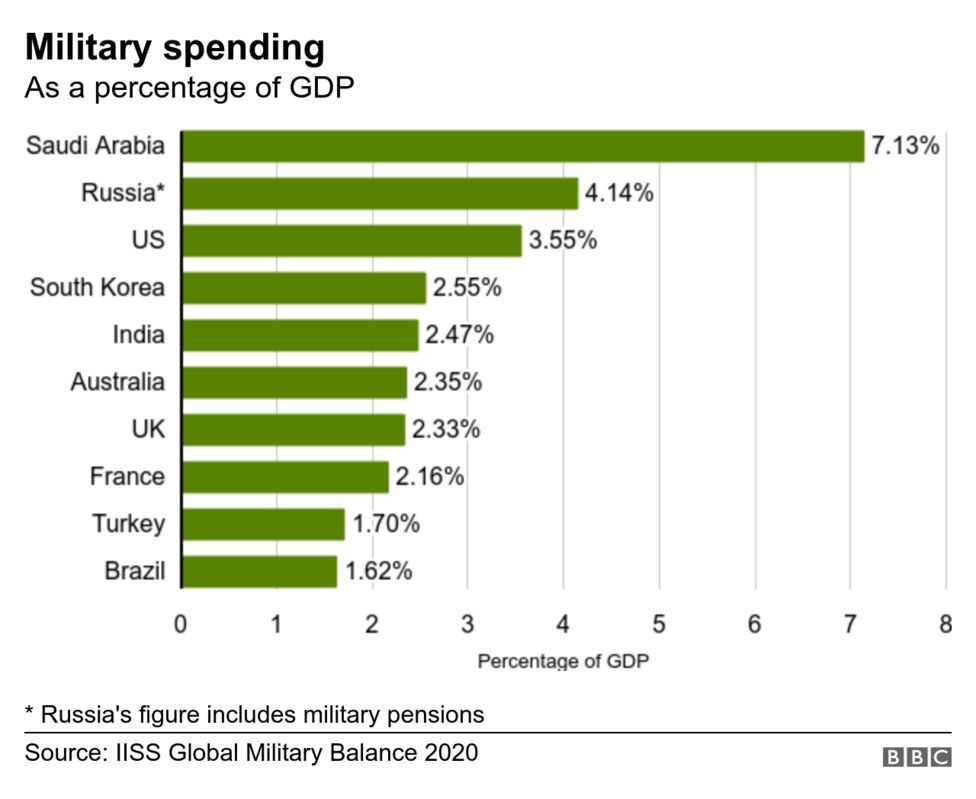 Data from the World Bank for 2018 puts the UK in 42nd place, well behind the likes of India, China, North Korea, Russia and the USA.

Since 2014, Nato has set a target for its members to spend 2% of GDP on defence.

However, there has been criticism surrounding the methodology used to calculate these numbers, such as whether war pensions count as defence spending.