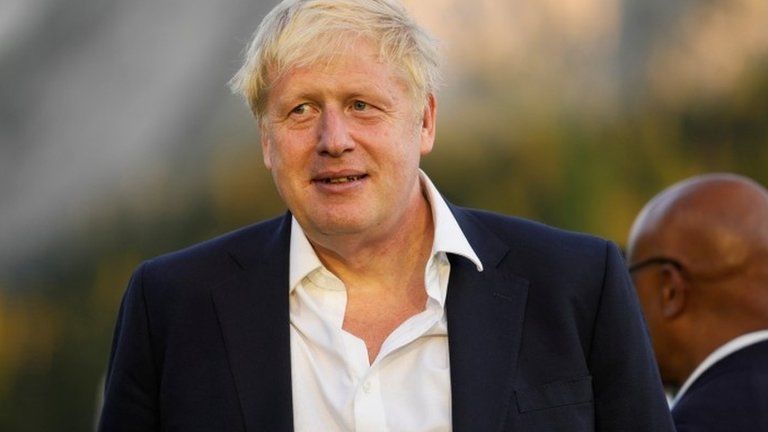 What to do about Ukraine, for how long, at what cost and with what consequences?

The consequences are profound, for Ukrainians, of course, but also too for geopolitics, European stability, the values of liberal democracy and the implications for the world economy.

The prime minister has sought here to emphasise the UK's long term commitment to Ukraine.

So when I met him for an interview at the summit venue, Schloss Elmau, overlooking the stunning Wetterstein mountains in the Bavarian Alps, I tried to find out what that might mean.

What is Boris Johnson's bottom line with Ukraine? Is it the expulsion of Russian forces so Ukraine's borders of six months ago are re-established?

The implication of what he has said recently would imply that, but he stopped short of saying so explicitly.

He tried to place the conflict in its historical context to justify its vast cost, comparing this contemporary war with the defeat of Nazi Germany.

"It took a long time. It was very expensive, but it brought decades and decades of stability, a world order that relied on a rules-based international system and that is worth protecting, that is worth defending delivers long term prosperity," he said.

He put no timeline and no budget on the UK's support, merely saying "strategic endurance is very important".

And here's the crux of this: a prime minister trying to square what he sees as a defence of British values on the world stage, with the domestic implications and costs of that very decision.

And while the G7 and Nato will give the outward impression of unity this week - the prime minister and French President Emmanuel Macron had a night cap whisky late last night and "patched things up", I'm told - the long term question still looms.

How does the conflict end, when, and what do Ukraine's borders look like at that point? And between now and then, how fractured does the Western alliance look?

There is talk here of an Anglo-French summit in the coming months.

This, after concern within the British government that the French were "leading the peloton", as one Whitehall source put it to me when it came to considering a peace deal between Russia and Ukraine sooner rather than later - and so accepting the loss of some Ukrainian territory to Moscow.

And from the international, to the domestic.

Bluntly, how long Boris Johnson will be in the job?

This is one of the longest stints out of the country Boris Johnson has done as prime minister - eight days.

And the questions about his future do not go away, here or back home.

Yes, reporters like me ask him about it frequently. 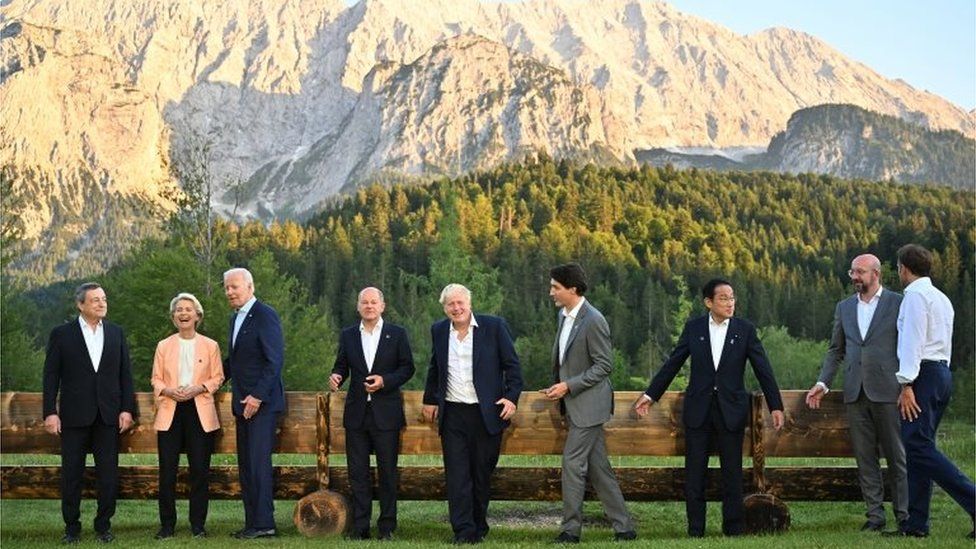 But that is because it is a live discussion among his own MPs, from the cabinet down.

Yet again, on questions of his character and conduct, so often the central criticism levelled at him by those within his party and beyond who want rid of him, he ducked engaging directly.

I suggested that when talks about seeking a third term, and carrying on until the 2030s, it was if he was putting his fingers in his ears to ignore the criticisms.

Again and again, he instead seeks to talk about policy - a shopping list of aspirations for the future.

They are big aspirations and things millions of people will hope he can make happen.

But the crucial thing now is whether he has the authority to deliver them, when at least 40% of his MPs have lost faith in him.

He, as you would expect, insists he does.

He ended our interview insisting he has not considered giving up, saying being prime minister is a "huge, huge privilege" and "nobody abandons a privilege like that".

But plenty of prime ministers have either chosen or been forced to do exactly that: think Margaret Thatcher, David Cameron, Theresa May.

Mr Johnson's internal critics want to add him to that list, but have an opponent defiant and determined to carry on.

And not always bound by the conventions of his predecessors.