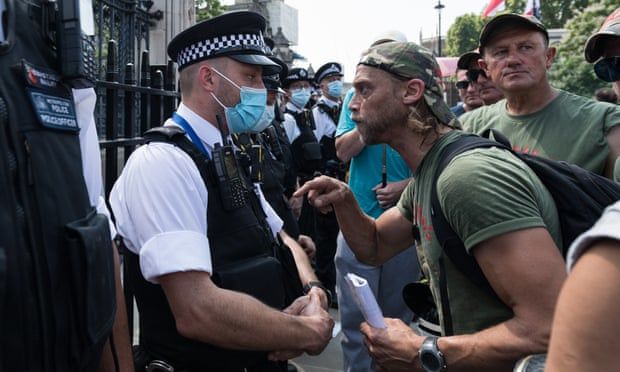 We have no confidence in Priti Patel, says Police Federation

Police officers in England and Wales furious at pay freeze after months on frontline of Covid crisis
Rank-and-file police officers have overwhelmingly supported a vote of no confidence in the home secretary, Priti Patel, the first such move in more than a decade.

In a scathing announcement, the Police Federation of England and Wales (PFEW), which represents 130,000 officers, said Patel and the government “could not be trusted” and warned “warm words are no longer enough”.

The move comes after Wednesday’s confirmation that officers paid £24,000 or more would be hit by a pay freeze in 2021-22.

The PFEW’s national chair, John Apter, said: “As the organisation that represents more than 130,000 police officers, I can say quite categorically: we have no confidence in the current home secretary. I cannot look my colleagues in the eye and do nothing.”

The shadow home secretary, Nick Thomas-Symonds, said he had written to Patel saying her position was “untenable” after the vote of no confidence.

Patel has attempted to position herself as a champion for the police, declaring in her 2019 Conservative party conference speech that the Tories had taken “their rightful place as the party of law and order in Britain once again” and pledging to give police the powers they needed to tackle crime.

The prime minister, Boris Johnson, placed policing at the heart of his campaigning before the last general election, pledging to recruit 20,000 police officers as well as expanding stop and search powers and increasing sentences for assaulting police officers.

Johnson and Patel attempted to court the Police Federation with supportive appearances at the body’s annual conference.

But after the government’s pay announcement on Wednesday, the Police Federation convened an extraordinary meeting of its national council, comprising the chair and secretary of each of the 43 force branches, where a vote of no confidence in Patel was carried.

It is understood to be the first time the PFEW has supported a vote of no confidence in a home secretary since 2007 for Labour’s Jacqui Smith, over her decision not to backdate a 2.5% pay rise.

This week they also voted to withdraw their support for the Police Remuneration Review Body process for police officer pay.

Apter added: “We often hear the home secretary praise police officers, but our members are so angry with this government. They have been on the frontline of this pandemic for 18 months and will now see other public services given pay increases while they receive nothing.

“At the beginning of this pandemic they endured PPE shortages and were not even prioritised for the vaccination. They continue to be politicised and this pay announcement is the final straw.”

The federation said with inflation likely to increase to almost 4% later this year, the pay freeze was a real-terms pay cut for police officers. In a statement, it said Patel and the government “cannot be trusted or taken at face value in the way we would expect”.

“As the undisputed voice of policing we say this to the home secretary: you cannot pat our members on the back for their heroic efforts with one hand, while effectively taking their pay with the other,” the federation said. “Warm words are no longer enough.”

Thomas-Symonds said: “The home secretary’s position is clearly untenable, and the police deserve nothing less than urgent action from the prime minister and this government.”

A Home Office spokesperson said: “The home secretary has demonstrated her commitment time and time again to supporting the brave police officers who keep us safe, giving them the resources and powers they need to fight crime and protect the public.”
#Boris Johnson  #Priti Patel  #Johnson  #Covid
Add Comment