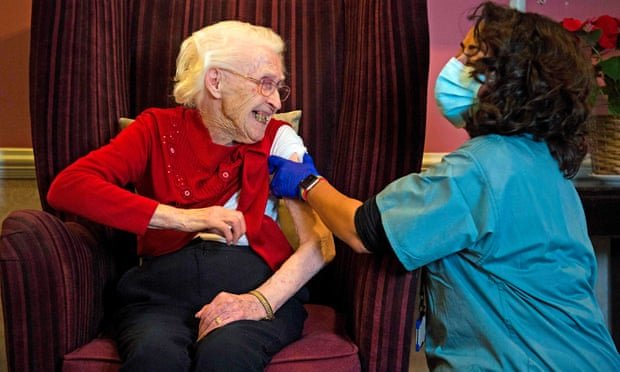 Care Quality Commission reports carers with virus being told to work in some homes, poor isolation and incorrect use of PPE

Inspectors have uncovered serious weaknesses in some care homes’ defences against the pandemic, including Covid-positive carers being told to work because of staff shortages, a failure to isolate residents when they return from hospital and poor use of personal protection equipment.

Over the past fortnight, the Care Quality Commission has warned at least 14 care homes in England about problems with infection control, which the independent regulator says can place residents in danger of harm and breach Health and Social Care Act regulations.

The problems emerged as Covid outbreaks in English care homes rose 65% in a week and GPs raced to deliver the Oxford/AstraZeneca vaccine in an attempt to inoculate the 400,000 highest-priority people by the end of this month.

Care homes reported relief on Thursday as the first doses of the new vaccine were delivered, but new data from Public Health England indicated it was a race against the clock.

The number of care homes in England that recorded a Covid infection in the last week of 2020 rose to 503, more than doubling in a fortnight. Deaths from Covid in care homes, however, remain far lower than during the pandemic’s first wave in the spring.

This week the Guardian reported growing concerns across south-east England, where a new more transmissible variant has been most prevalent, and a serious Covid outbreak in East Sussex where 13 of 27 residents died over Christmas.

The CQC found problems in a number of facilities, including the Brookfield Care Home in Middlesbrough, where 41 staff and residents tested positive in the space of a week in October and eight residents died from Covid. 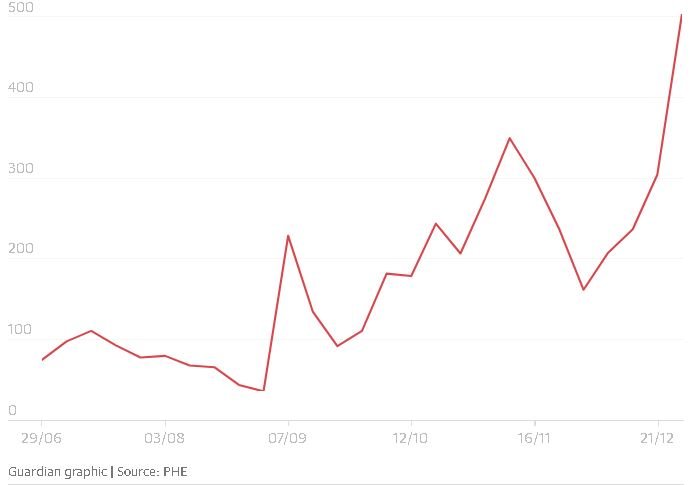 A targeted inspection after the outbreak found “the provider was not adequately encouraging social distancing” and “cohorting of staff and zoning of the service had not been fully adopted to minimise the risk of infection travelling between different areas of the service”.

At Brookfield, five staff members told CQC inspectors they or their colleagues had been asked to work with Covid symptoms or a positive test result. The Brookfield operator, SSL Healthcare, said this happened when the outbreak created severe staff shortages. It had been discussed with the local authority, which changed its advice the following day.

“One asymptomatic member of staff did report for duty; they left the premises within 30 minutes following the change in advice,” said SSL. “All recommendations have been implemented. We are confident that all our residents are safe and well cared for.”

At Vestige Healthcare in Tipton, in the West Midlands, inspectors observed staff wearing face masks incorrectly 30 times in one day and were told: “People are not isolated when coming back from hospital.”

The inspectors concluded “no consideration as to how to maintain social distancing had been given” and ruled the home inadequate. Vestige did not respond to a request for comment.

Problems identified at other homes included a lack of cleaning and staff moving between floors when they were supposed to be working in defined zones to reduce infection. In one home, inspectors found the dirty laundry of a person self-isolating after returning from hospital left in an open bag in the communal corridor.

A targeted inspection at The Croft, an Autism UK care home on the Isle of Wight, found “staff making close contact and touching people ... not wearing disposable gloves or aprons” and a relative visiting a resident in the communal lounge shared with other people.

“The failure to correctly follow government best practice guidelines placed people at risk of infection,” said a report that concluded the home had breached safe care regulations and was “inadequate”.

Autism UK said it had been “working incredibly hard in difficult circumstances”. “We have acted upon all the issues raised in the CQC report, and we can demonstrate that the processes we have in place mean that the people we support and our staff are properly protected,” a spokesperson said.