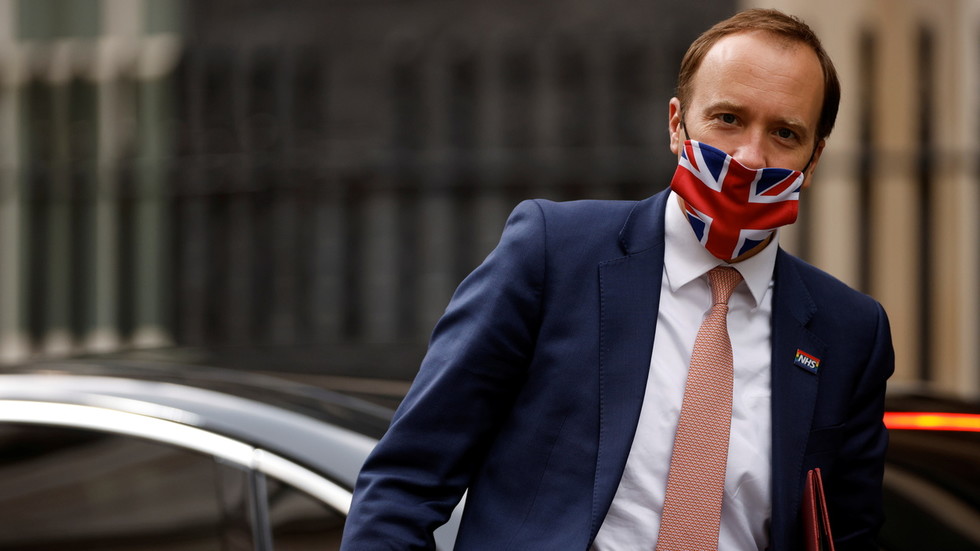 Watch out, Africa! The clown who messed up Britain’s Covid response can now wreck an entire continent’s health

Hancock has been appointed by the UN as its “Special Representative on Financial Innovation and Climate Change for the United Nations Economic Commission for Africa.” It’s a bit of a mouthful, but one of the main aspects of his new role will be overseeing Africa’s economic recovery in the aftermath of the pandemic.

When appointed to the role, Hancock was praised by the UN’s under-secretary general, Vera Songwe, for his “global leadership, advocacy reach and in-depth understanding of government processes through… various ministerial cabinet roles.” She also congratulated him on his “success” in tackling the virus.

Hancock’s time as health secretary was brought to an abrupt end in June, when a newspaper published photographs of him in a clinch with one of his advisors. The fact that he was clearly playing away from home wasn’t the problem; the fact that he was breaking his own social distancing rules was, and he had to go.

Hancock will hope that this new appointment will amount to a Lazarus-like resurrection of his political career. To be honest, it’s probably for the best that he is packed off to Africa for a while, because his reputation in the UK is shot to pieces. Indeed, his own local branch of the Conservative Party wanted rid of him, until he wrote a grovelling “heartfelt apology.”

Now I do not begrudge Hancock being given a second chance and the opportunity to redeem himself. After all, we all make mistakes, although his were bigger than most. But I question the logic in the UN giving him this role, because it’s plainly obvious that he is not up to the job.

Indeed, on the same day that he was appointed, a parliamentary report was released that criticised the government’s handling of the Covid crisis, particularly at the outset. The report notes that “in 2020 the UK did significantly worse in terms of Covid deaths than many countries—especially compared to those in East Asia, even though they were much closer geographically to where the virus first appeared.”

The report also asserts that the failure to stop Covid spreading early in the pandemic was one of the country’sworst public health failures. To put this in perspective, in 2020 there were 72,178 deaths from Covid in England. And whose watch was that on? That’s right, Matt Hancock’s.

Prime Minister Boris Johnson’s former advisor, Dominic Cummings, claimed that he called for Hancock to be sacked “almost every day” due to alleged “criminal” behaviour. However, Cummings said that Johnson was advised to keep Hancock because “he’s the person you fire when an inquiry comes along.”

Moreover, the PM seemingly did not hold Hancock in high regard,writing in a leaked WhatsApp message that the then-health secretary was “totally f****** hopeless.” And this is the man who will now oversee Africa’s Covid recovery. You really couldn’t make it up.

It used to be said that the UK would pack failed politicians off to the European Commission – think Neil Kinnock and Baroness Ashton. Now that avenue has closed, it seems the UN is the preferred destination.

Besides Hancock’s failings during the pandemic, this appointment reeks of colonialism. I thought the days when the white man was sent out to fix Africa’s problems had rightly passed a long time ago, but in the case of Hancock, apparently not.

Why couldn’t the UN have chosen an African to oversee Africa’s Covid recovery? Surely it would have made more sense for someone who actually knows the continent to be heading up such a programme? Instead, they have Hancock, pith helmet and umbrella at the ready.

The appointment has unsurprisingly received criticism in Africa, with Dr Ayoade Alakija, co-chair of the African Union’s Africa Vaccine Delivery Alliance for Covid-19 jabs, saying, “this is so tone deaf, beyond arrogant that they think we in Africa need Matt Hancock to help 1.3 billion people recover from the pandemic, when he couldn’t manage the one in the UK!”

Hancock’s appointment has the stench of the old boys’ club, where failed politicians from the UK’s established parties miraculously fall into jobs at the drop of hat, regardless of their performance in their previous roles.

We see it all the time with former ministers taking prominent positions at multinational companies, like former deputy PM Nick Clegg at Facebook.

Now we have it with Hancock at the UN, even if it must be acknowledged that his role is unpaid (although I’m sure the perks and expenses will make up for it). Indeed, you have to say that Hancock’s ability to fail upwards is admirable, as it is with so many of these establishment politicians.

I hope for the sake of Africa that Hancock’s performance in his new role is better than his time as health secretary, where he oversaw the biggest health calamity that this country has ever encountered. However, I suspect this is a case of hope over experience, because a leopard like Hancock rarely changes his spots.