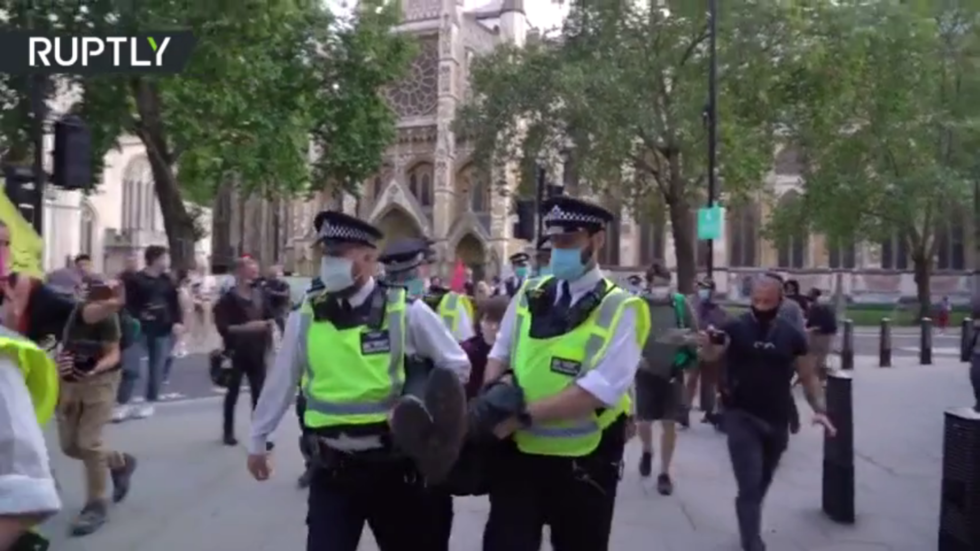 Already targeted in the recent past, the Winston Churchill statue has been defaced and dubbed ‘racist’ again, with the man suspected of doing this being literally removed from the scene in front of TV cameras.

A young man was spotted spray-painting the words ‘is a racist’ on the base of the bronze Churchill statue just as the Extinction Rebellion rally gained pace on Thursday. The graffiti-savvy suspect – apparently caught red-handed – was arrested by Met Police on suspicion of vandalizing the statue.

Footage by Ruptly video agency shows a cohort of London police officers making way for their colleagues carrying the man out of Parliament Square. A while later, another man in a red vest tries to clean off the yellow graffiti, but to no avail.

London Mayor Sadiq Khan said “this appalling vandalism” is unacceptable and will be investigated. The statue will be cleaned “as quickly as possible,” he promised.

Also on Thursday, police arrested over a dozen topless women who chained themselves to the fence surrounding Parliament. The protesters wore face masks with ‘4C’ printed on them, and with words warning of drought, starvation, and wildfires written on their chests, along with banners reading “Can't Bare the Truth?”

Home Secretary Priti Patel referred to the XR activists as “so-called eco-crusaders turned criminals” and pledged to prevent “anarchy on our streets.”

This isn’t the first time the Churchill statue has been vandalized during street protests. Earlier in June, the monument was defaced twice by Black Lives Matter protesters using similar words.