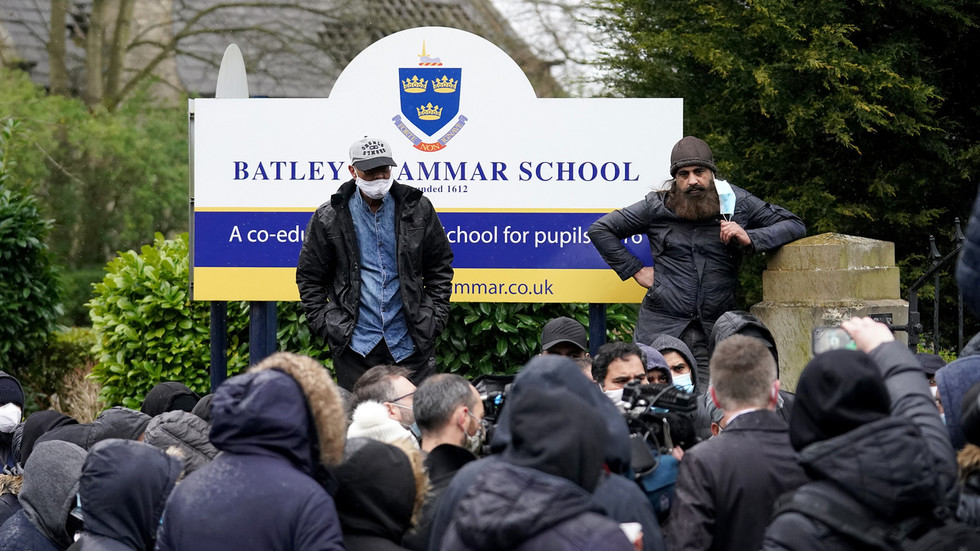 British government officials have condemned threats of violence against a teacher who sparked outrage among Muslims by showing a caricature of Prophet Mohammed in class.
Education Secretary Gavin Williamson said that protesters outside Batley Grammar School in West Yorkshire had made threats and flouted Covid-19 restrictions. Such activities are “completely unacceptable and must be brought to an end,” he said.

The school suspended a teacher for showing a caricature of Islam’s Prophet Mohammed in class. Artistic depictions of Mohammed are considered blasphemous by Muslims. The incident caused outrage among parents and sparked protests, which continued on Friday.

According to LBC radio, some protesters were chanting “Allahu akbar,” which means ‘God is greater’ in Arabic, and “Get the headteacher.”

“It is never acceptable to threaten or intimidate teachers,” Williamson said, adding that the government supports dialogue between parents and teachers.

Williamson argued that schools are free to include “challenging or controversial” material in their curriculum, but must “balance” this with the need to promote respect and tolerance of different religions.

Housing, Communities and Local Government Secretary Robert Jenrick told Sky News that he was “disturbed” by the scenes from the protests, which he said were “not right.” He added that teachers should not be feeling intimidated, calling the reports that a teacher may have gone into hiding due to the treats “very disturbing.”

“That is not a road we want to go down in this country,” Jenrick said. Just like Williamson, he argued that there must be an “appropriate balance” between the freedom of speech and teaching in a respectful manner.

The teacher was described by the UK media as a 29-year-old man who was teaching a course in religious studies. The Daily Telegraph cited a source saying that he was under police protection after being identified online.

The school apologised to parents for its teacher using “totally inappropriate” material during a lesson and promised to review the whole course.

Cartoons and caricatures of Mohammed have sparked fierce backlash and violence in the past. In 2015, terrorists stormed the Paris office of a French satirical magazine Charlie Hebdo that ran several such images, and killed 12 people, including some of the cartoonists. Last year, a French teacher Samuel Paty was murdered by a radicalized Muslim man for showing a Charlie Hebdo cartoon in class as part of a lesson on the freedom of expression.
#COVID-19  #Covid
Add Comment