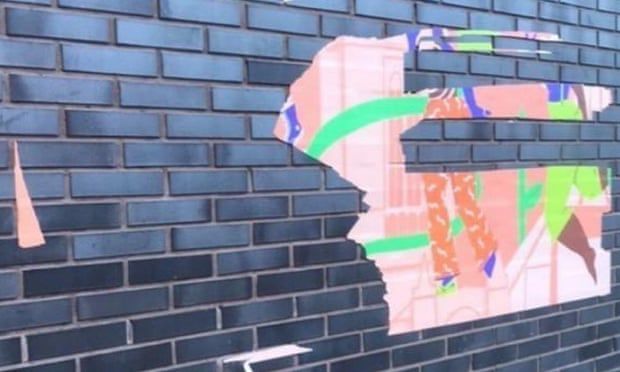 Detectives are investigating after two artworks, commissioned in response to a series of homophobic and transphobic attacks in Liverpool, were destroyed. Merseyside police said they are treating the incidents as hate crime.

The artworks were vandalised within days of going on display as part of Homotopia festival’s Queer the City outdoor exhibition.

The incident, caught on CCTV, involved several individuals ripping down a poster reading Queer With no Fear at 4am on Wednesday, according to Homotopia’s director, Char Binns.

The work, by the artist Ben Youdan, had been displayed in the window of Fact, a cinema and cultural centre. “It was found by a member of staff from Fact scrunched up in a ball at the Bombed Out church later that morning,” Binns said. 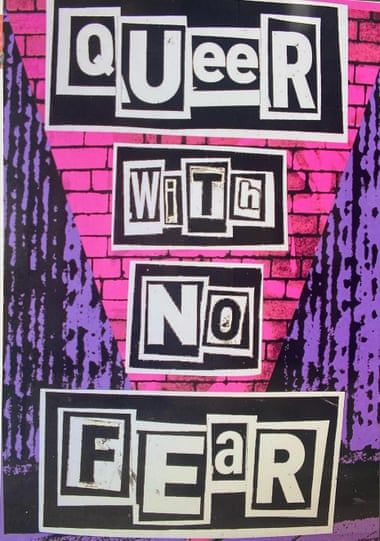 Ben Youdan’s poster Queer With no Fear before it was destroyed.

A similar incident occurred on 29 October, when a piece entitled Hate Has No Place in Liverpool was ripped from a wall in the city centre. The artist Rosa Kusabbi described her illustration as a “joyous celebration of all things LGBTQIA and Liverpool”, including a banner reading Here and Queer.

Binns said she was “absolutely gutted” by the incidents. “It’s very hard not to take it personally. We can’t say definitively what the motive was behind these artworks being removed, but we already operate as queer people in this climate of fear and this work was created in response to hate crime in our city. So regardless of the motive, it still makes us feel afraid and attacked.”

Hundreds of people protested in Liverpool in June after a series of violent attacks. In one incident, a gay couple and their friends were threatened at knifepoint and beaten up by a group who shouted homophobic abuse.

Youdan’s artwork, funded by Liverpool council’s culture department in response to the attacks, was intended as “something positive coming out of something very negative”, said Binns. She said the incident had left the team behind Homotopia, the UK’s longest-running LGBTQI arts and culture festival, feeling frustrated.

“We want to be visible as a community. Homotopia is all about being out and proud and loud and fabulous. But if that makes us vulnerable, how do you do that? How can you be both visible and safe?” she said.

Binns vowed that the artworks would be reinstated. “The bigger picture is that we are in the middle of this joyful festival where we have deliberately commissioned joyful queer art because we all need a break. We will reinstate this art. It will be bigger, it will be queerer. This is not going to stop us.” 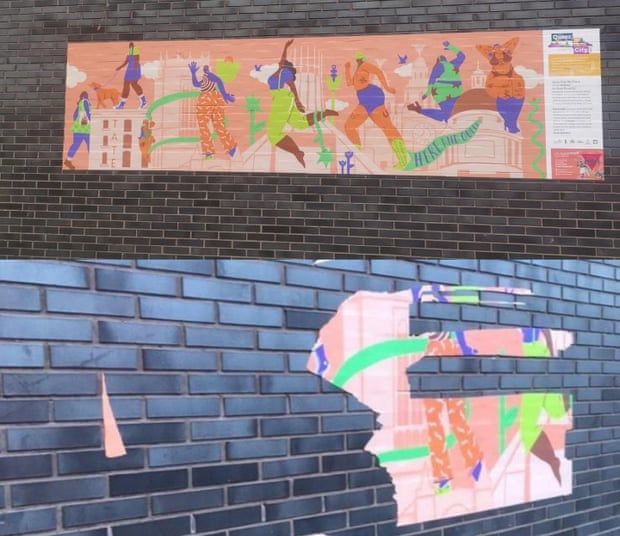 Rosa Kusabbi’s artwork Hate Has No Place in Liverpool, top, and after it has been vandalised, below.

Harry Doyle, Liverpool city council’s culture lead, tweeted: “I’m absolutely disgusted that this bigotry is playing out on our streets … Hate has no place in Liverpool!!”

“We are checking CCTV footage and will be inspecting the other artwork around the city which has been installed as part of the outdoor exhibition. We are also engaging with the LGBTQ+ community to reassure them that we are taking this incident seriously and we will take action against those responsible.

“Liverpool has a reputation for being a welcoming, friendly city and there is no place here for hate crime.”