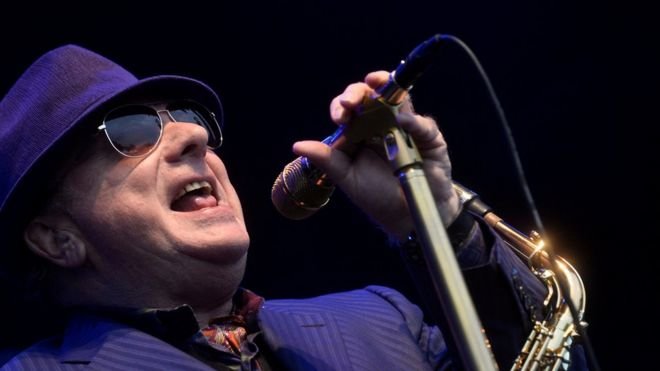 Sir Van Morrison has accused the government of "taking our freedom" in three new songs that protest against the coronavirus lockdown.

In the lyrics, he claims scientists are "making up crooked facts" to justify measures that "enslave" the population.

Speaking on Wednesday, the prime minister said the government was doing "everything in our power" to prevent another nationwide lockdown.

"I don't want a second national lockdown - I think it would be completely wrong for this country," Boris Johnson told MPs at the Commons Liaison Committee.

"So when I see people arguing against the rule of six or saying that the government is coming in too hard on individual liberties and so on - I totally understand that and I sympathise with that, but we must, must defeat this disease."

Recorded "recently" in Belfast and England, Sir Van's three new songs sit in a familiar vein of jazz and bluesy R&B. However, the lyrics recall the angry young man who fronted Northern Irish rock group Them in the 1960s.

No More Lockdown is the most strident of the three tracks. "No more lockdown / No more government overreach," the musician sings in the chorus. "No more fascist bullies / Disturbing our peace.

"No more taking of our freedom / And our God given rights / Pretending it's for our safety / When it's really to enslave."

Another song references a widely-shared Facebook post, of a screenshot from a UK government website saying, "Covid-19 is no longer considered to be a high consequence infectious disease (HCID) in the UK".

While it is true that Covid-19 does not meet the criteria for an HCID - which typically has a high fatality rate (as much as 50% in the case of Ebola) - the disease is still considered highly infectious, with no specific vaccines or treatment currently available.

"I don't know where he gets his facts," said Swann. "I know where the emotions are on this, but I will say that sort of messaging is dangerous."

Sir Van has previously caused controversy by denouncing what he called the "pseudoscience" around coronavirus.

Launching a campaign to "save live music" on his website last month, the 75-year-old said socially distanced gigs were not economically viable.

"I call on my fellow singers, musicians, writers, producers, promoters and others in the industry to fight with me on this. Come forward, stand up, fight the pseudo-science and speak up." 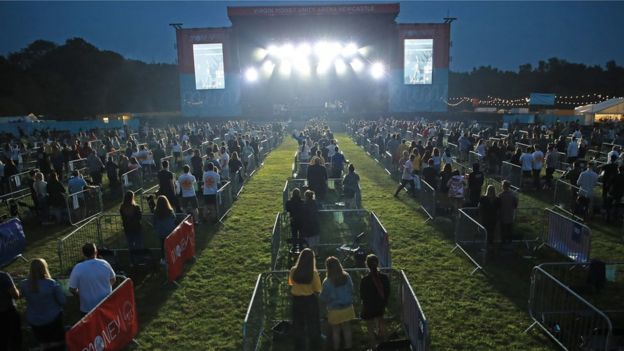 Some socially-distanced gigs have been called off this week, after a spike in the number of coronavirus cases

The Brown Eyed Girl songwriter has already played three socially-distanced gigs this month, and has two shows at The London Palladium next week but he says these types of concerts are unsustainable and he is worried about the future of live music.

"This is not a sign of compliance or acceptance of the current state of affairs, this is to get my band up and running and out of the doldrum," he said.

The Music Venue Trust estimates that 400 grass roots venues in the UK are at the risk of closing.

Sir Van said his new songs would be released at two-week intervals with the first, Born To Be Free, arriving on 25 September.

In a statement announcing the songs, the musician said: "I'm not telling people what to do or think, the government is doing a great job of that already.

"It's about freedom of choice, I believe people should have the right to think for themselves."

The BBC has approached the government for a response. 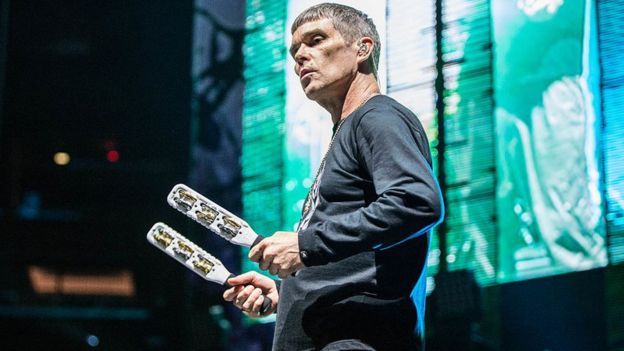 Also on Friday, former Stone Roses star Ian Brown released a new track questioning the motives behind the lockdown, and indeed a vaccine.

Little Seed Big Tree includes lyrics about a "false vaccine" and a "plan to chip us all, to have complete control" - a conspiracy theory that has repeatedly been debunked.

The track arrived just weeks after the Stone Roses singer caused a stir on social media, by tweeting: "No lockdown, no tests, no tracks, no masks, no vax."

After he doubled down on those comments online on Thursday evening, another Mancunian singer Liam Gallagher - who cites Brown as one of his heroes - replied, with a simple; "Ian. Shut up x"

Gallagher's older brother Noel this week said on a podcast that he is also refusing to wear a "pointless" mask, despite UK restrictions.