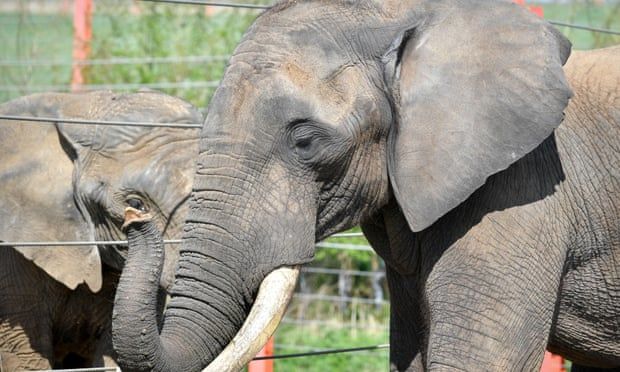 Sellers could pass off elephant products as derivatives from unprotected mammals, Born Free Foundation says
Ivory peddlers may continue to sell elephant tusks after a new ban by disguising their products as walrus or narwhal derivatives, campaigners have warned.

From Monday, trade in elephant teeth and tusks is illegal in the UK, punishable by fines of up to £250,000 or up to five years in prison under the Ivory Act. Pre-1975 musical instruments and antique items of “outstanding importance” are exempted from the act, as well as ivory from non-elephant species.

But Born Free Foundation, a wildlife charity, is calling for the ban to be extended to the ivory of other species, saying unscrupulous sellers might otherwise pass off elephant products as derivatives from unprotected mammals.

Research by the campaign group found £1.1m worth of ivory-containing products listed for sale on three UK online marketplaces in a single month in late 2021. In two-thirds of the 1,832 ivory product listings, it was impossible to identify the species because of the limited number and quality of the images provided, the researchers said.

Of the ivory-containing items where the species could be identified, the majority were derived from elephants (491 out of 606), with walruses (48), sperm whales (26), hippopotamuses (15), warthogs (12), mammoths (eight) and narwhals (six) also featured.

Will Travers OBE, Born Free’s co-founder and executive president, said: “The take-home message from our report is that all ivory trade – from any species – has to end. Just a few weeks ago, wildlife law enforcement officials in the Democratic Republic of the Congo intercepted 2,000 kg of ivory, representing an estimated 150 dead elephants.

“Via the online trade, could this have been destined – at least in part – for the UK market?”

Dr Mark Jones, Born Free’s head of policy, said: “The government must now ensure that the system they have introduced to prevent the trade in most elephant ivory is sufficiently robust to ensure only items that genuinely meet the exemption criteria can be traded. Our research demonstrates the sheer scale of online trade in ivory in the UK.”

Jones said he was concerned that law enforcement might find itself too stretched to police the vast online market, allowing fly-by-night dealers a chance to pass off illicit elephant ivory as something else.

The Born Free report, entitled Are Ivory Sellers Lying Through Their Teeth?, uncovered 331 cases in a single month of vendors selling ivory on eBay UK – despite trade in ivory having been banned on the platform in 2009.

Most of the ivory products listed on the website were disguised with varying degrees of subtlety, with one advert saying the item was “cold to the touch”, a recognised code phrase, and another saying that the material had come from “an animal with a trunk”.

Commonly, vendors listed products as “ivorine” or “faux ivory” on eBay UK, while admitting they in fact contained ivory in adverts for the same item appearing on specialist auction websites.

There were 414 individual vendors of ivory products across the UK and Channel Islands identified over the month-long study period, selling products that included walking sticks, ornaments, jewellery and a hairbrush.

An eBay spokesperson said: “eBay is a founding member of the Coalition to End Wildlife Trafficking Online. We have been working to tackle the illegal trade in elephant ivory for many years, and work alongside WWF and IFAW to continually update our policies and processes. We have global teams dedicated to enforcing our policies, and over a recent two-year period we blocked or removed over 265,000 listings prohibited under our animal products policy.”

Antiques Atlas has since taken down the relevant ad. Iain Smith of Antiques Atlas said: “The ivory category and its associated stock has now been removed. We are not a big auction site with big volumes of stock being sold every week. We have had one item uploaded to that category in the last six months.

“Over the last two years we have found most dealers have been reducing their ivory stock and moving away from it … I don’t think I have met a single antique dealer who wasn’t against the illegal ivory trade and the threat it poses to this endangered species.” Smith said he would also support a complete ban on the sale of ivory abroad from the UK.

The government called for evidence on banning trade in non-elephant ivory in 2019. Among the species considered for protection were hippos, killer whales, narwhals, sperm whales, walruses, common warthogs, desert warthogs and mammoths.

A number of respondents to the consultation objected to extending the ivory ban to non-elephant species, with one saying it would have a massively detrimental effect on musicians who depend on these sources for instrument manufacture and repair.

Another respondent argued that outlawing the trade in ivory from these species would harm “small businesses, private collectors, museums, researchers and students of everything from antiquities to ladies’ antique dresses, without preserving threatened animals”.

Peter Goldsmith, the animal welfare minister, said: “The world-leading Ivory Act coming into force represents a landmark moment in securing the survival of elephants across the globe for future generations. Thousands of elephants are unnecessarily and cruelly targeted for their ivory every year for financial gain. As one of the toughest bans of its kind, we are sending a clear message the commercial trade of elephant ivory is totally unacceptable.”
Add Comment