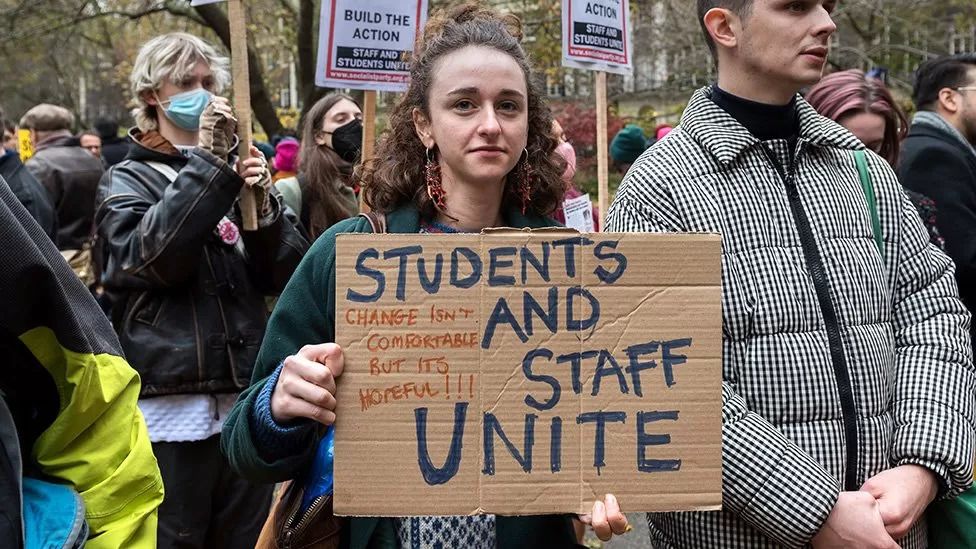 University staff to strike over pay and pensions

University lecturers, librarians and admin staff across the UK will strike over pay and pensions, the University and College Union (UCU) has announced.

A total of 70,000 UCU members at 150 universities were asked to vote in two separate ballots - one on pay and working conditions, and another on pensions.

Strike dates are yet to be decided.

University employers say a pay rise would put jobs at risk in what they say are "very difficult" financial times.

Students - some of whom have supported previous strike action by university staff - could face lectures being cancelled or rearranged.

Universities UK (UUK), an organisation representing 140 institutions, said universities would try to reduce the impact of any strikes on students and other staff members.

The Universities and Colleges Employers Association (UCEA), which represents university employers across the UK, proposed a 3% pay increase for staff this academic year, with 9% for those on the lowest pay grades.

But UCU members want a pay rise to take the rising cost of living into account - much like unions in other sectors which have pushed for strike action in recent months.

Inflation - the rate at which prices rise - is close to 10%, the highest level for 40 years. That means workers' living costs are rising faster than their wages, leaving them worse off.

In the pay-and-working-conditions dispute, the UCU wants staff to receive a 12% pay rise, or Retail Price Index plus 2%. It also wants to address "dangerously high workloads" and scrap zero-hours contracts.

Some 81.1% of members who took part in the ballot, across 147 universities, voted for strike action.

UCEA chief executive Raj Jethwa said the results were "disappointing", adding that there must be a "realistic assessment of what is possible" in "very difficult" financial circumstances.

"[Higher education] institutions want to do more for their valuable staff, but any increase in pay puts jobs at risk," he said.

He said UCEA was willing to work with UCU, "but attempts to try and take more industrial action may simply hurt some students and staff for no realistic outcome".

In the separate pensions ballot, 84.9% of members who took part, across 67 universities, voted for strike action.

The pensions dispute is about a valuation of a pension scheme called the Universities Superannuation Scheme (USS), used by academic staff. The UCU says the valuation is flawed and could lower members' guaranteed retirement income by 35%.

But a UUK spokesperson, speaking on behalf of USS employers, said contributions to USS pensions were already "at the very limit of affordability".

This is the first time a ballot by any education union has passed the legal threshold of 50% turnout across the country - enabling it to call a national strike - rather than in individual universities, which would have allowed only staff in those institutions to strike.

In an interview with BBC News after the strike action was announced, Dr Grady said some members on zero-hours contracts have told the union they have had to live in tents, sleep on library floors, or go to food banks as they "cannot make ends meet" with their low pay.

"That is the dirty secret of higher education," she added.

Asked about potential disruption a strike could have on students' degrees, she said: "We are fighting for a better education system, and students would benefit from that too."

Strike dates will be decided by the UCU soon, and it is understood action could start before Christmas.