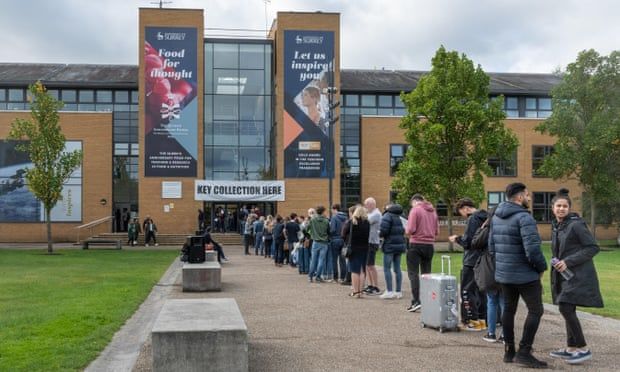 ‘Line has been crossed’ say English universities, after request to drop scheme identifying barriers to ethnic minority students
Universities in England have launched a fightback against government attacks on their autonomy, telling ministers they “crossed a line” by pressurising them to abandon a scheme designed to improve equality on campus.

In what may be a turning point in the so-called “culture wars” over free speech, Universities UK (UUK) took on the education minister Michelle Donelan after she warned them to reconsider membership of a race equality charter, run by the charity Advance HE.

The scheme – which counts the majority of Russell Group universities among its members – aims to identify barriers to success for black, Asian and minority ethnic students. But in a letter to vice-chancellors this week, Donelan claimed that membership of the charter was “in tension” with universities’ duties to uphold free speech.

In its letter of response on Thursday, Universities UK said: “An important line has been crossed with the letter appearing to direct universities to take a specific approach” on equalities.

In a later statement, UUK confirmed that it intended to ignore Donelan’s request and remain affiliated with Advance HE.

A spokesperson for UUK said: “Universities take their responsibilities to promote and protect free speech very seriously. We have yet to see any evidence of how this voluntary, non-prescriptive scheme works against this.

“The scheme is voluntary and provides a means through which universities can address racial inequality within the sector and we will continue our work with Advance HE to support this goal.”

The row comes as the higher education freedom of speech bill is being debated in the Lords, where it has come under fire from Conservative, Labour and cross-bench peers. It has been criticised for imposing a new free speech regulator with new powers to fine universities for failing to comply with free speech provisions.

Vice-chancellors said Donelan’s letter was a chilling forerunner of how a regulator could interfere with internal university affairs if the bill is passed in its current form, with one describing it as “an unambiguous attack on university autonomy”.

David Willetts, the Conservative peer and former universities minister, said: “I do wish to see protections for freedom of speech, but it’s very odd to protect freedom of speech at the same time as further intervention.

“I think one of the reasons why universities in Britain are so internationally respected is because of their autonomy. I don’t think it’s as much a line being crossed as a slippery slope that we are on, in which the autonomy of our universities is gradually eroded.”

The letter to Donelan, signed by Prof Steve West, vice-chancellor of the University of the West of England, reminded the minister that racism remained “a pervasive societal issue” that affected students from ethnic minority backgrounds.

But it added: “Universities, as autonomous institutions, must also remain free to decide how best to foster inclusivity and tackle societal issues such as racism which have a serious and detrimental impact on staff and students.”

The letter continued: “We do not believe that free speech and voluntary external assurance frameworks are at odds with each other – rather they can help to address power imbalances and ensure a more diverse range of voices are empowered to speak up.

“We understand from our members in England that a number will likely respond to you directly, both to restate their commitment to ensuring free speech and to highlight how external assurance schemes play an important role in tackling serious issues such as harassment and degree awarding gaps.”

While Donelan’s letter noted that universities were autonomous and free to join schemes such as the race equality charter, she went on to say they should “reflect carefully” on membership.

While Advance HE’s race equality charter was the only example mentioned by name, Donelan went on to say that “there are of course a number of other, similar, schemes, and this letter invites careful consideration in respect of all these”.

Advance HE also administers the Athena Swan charter that seeks to improve gender equality within higher education and research. Donelan has previously described the scheme as “at worst a dangerous initiative that undermines scholarship”.

“Bearing in mind the substantial sums invested by the taxpayer into higher education, I would ask you to consider whether membership of these schemes; the initiatives that flow from them; and the creation of new, highly paid, management roles in these areas truly represent good value for money for taxpayers or students,” Donelan said.

Criticising the higher education freedom bill when it was debated this week, Shami Chakrabarti, a Labour peer and a former director of Liberty, said: “How can it be a protection of academic freedom to give more and more power over independent institutions of scholarship to the government’s Office for Students and the new director for freedom of speech?”

Willetts said that the current bill was heavy-handed and questioned how the bill’s freedom of speech regulator could balance the government’s demands that some forms of legal speech, such as holocaust denial, would not be allowed on campus.

“They are expecting the regulator to be more restrictive than simple lawful, freedom of speech. We need to know exactly what things he or she is not going to protect despite them being lawful,” Willetts said.

Willetts said he hopes the government would make “significant” amendments to the bill, pointing out that universities could find themselves punished for suppressing some forms of speech at the same time as tech platforms were punished under the government’s new online safety bill for transmitting the same opinions.
Add Comment