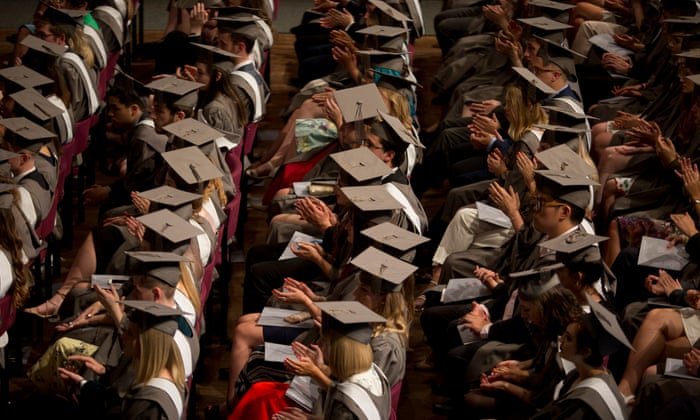 Universities brace for huge losses as foreign students drop out

Call for a government bailout worth billions to help sector survive the crisis
Some universities are already expecting to lose more than £100m as foreign students cancel their studies, with warnings that the impact of coronavirus will be “like a tsunami hitting the sector”.

Several organisations are now planning for a 80-100% reduction in their foreign student numbers this year, with prestigious names said to be among those most affected. The sector is already making a plea to the government for a cash injection amounting to billions of pounds to help it through the crisis, as it is hit by a drop in international student numbers, accommodation deals and conference income.

Universities are already lining up online courses for the start of the next year, but academics are concerned about the impact on first-year students new to university life. Many institutions have recently borrowed heavily to pay for attractive new faculties, often designed to attract overseas students. It comes against a backdrop of declining numbers of university-age students in the UK and the previous uncertainty around Brexit.

Andrew Connors, head of higher education at Lloyds Banking Group, said the crisis has felt “less like a perfect storm and more like a tsunami hitting the sector”. Banks have not had urgent requests from universities, as big financial hits are expected later in the year. However, he said that “while the immediate impact we are seeing in the sector is slower, the overall impact of Covid-19 is potentially deeper and longer”.

In a blog for the Higher Education Policy Institute (Hepi) published today, he writes: “Many institutions are modelling reductions of between 80% and 100% in international student numbers. Every university we have spoken to expects to be impacted and for some the potential loss to income is projected to be greater than £100m. And that is before you factor in that losing new students has a multi-year impact.”

He adds that he expects banks to offer UK universities loans where needed, given their significance in the economy. He warns, however: “I worked through the financial crisis of 2007/08 and it does not compare in my experience to what we are witnessing now – this crisis has touched everybody in some shape or form and many previously viable businesses are now in a fight for survival.”

The Office for Students, the independent regulator of higher education, has already streamlined its rules in the wake of the crisis, calling for universities to sound the alarm if they fear they’ll run short of cash within 30 days.

Universities UK, the industry body, has proposed a series of measures to the government to double research funding and offer emergency loans to troubled institutions, as well as placing a cap on the number of undergraduates many institutions can recruit in 2020-21.

Nick Hillman, Hepi’s director, warned that universities only had limited options to cut their costs. “There are things they can do to mitigate the impact, such as doing all they can to ensure international students keep coming, pausing the development of their estates, doing less research, looking at their staffing and persuading home final-year students to stay on for postgraduate study. But some were in financial difficulties even before the current crisis.