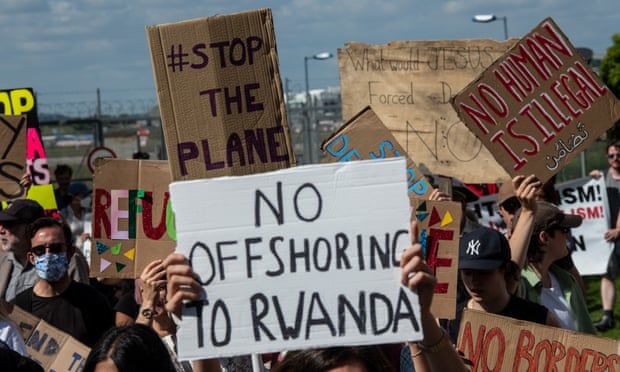 Appeal against plan to remove asylum seekers who arrive in the UK via unofficial routes due to take place on Monday
Protests have taken place before a possible first flight removing asylum seekers to Rwanda, as unions said that officials should not be asked to take part in a policy that may subsequently be declared illegal.

With the first flight in the deportation scheme scheduled to take place on Tuesday evening, activists also promised to target the Spanish charter airline understood to be providing the aircraft.

A high court judge ruled on Friday that he would not halt the first deportations to Rwanda of individuals who had arrived in Britain via unofficial routes, but an appeal against his decision is due on Monday.

Hundreds of people, including representatives of campaign groups and religious organisations, gathered in Manchester’s St Peter’s Square on Sunday to protest against the flight, which speakers described as obscene, also citing criticism from Prince Charles, who reportedly called the scheme appalling.

Mark Serwotka, general secretary of the PCS union, which represents more than 80% of Border Force staff, said he was hopeful the appeal would stop the flight, adding that Priti Patel, the home secretary, should not implement the policy before its legal position was fully tested.

He told Sky’s Sophy Ridge on Sunday programme: “Imagine if you’re a civil servant now in the Home Office, who goes to work because you want to see a humane immigration system where people are treated fairly and we comply with our international obligations.

“Imagine if you’re told to do something on Tuesday, that in July is subsequently found to be illegal. That would be an appalling situation.

“I mean, if Priti Patel had any respect, not just for the desperate people who come to this country, but for the workers she employs, she would not ask a single one of them to be part of any deportation of any asylum seeker, until at least these cases are heard in court for the full legality judgment, which will be in July.”

The Home Office has said it is engaging with staff, but is stressing their responsibility of civil servants under the civil service code to serve the government of the day.

A Spanish airline is understood to be undertaking the deportation flight on behalf of the Home Office. According to Civil Aviation Authority records, Privilege Style has been granted a permit to fly to the Rwandan capital, Kigali, on Tuesday at 9.30pm from Stansted airport in Essex.

Activists opposed to the flight said they would lobby the company. Karen Doyle of Movement for Justice said it would be “morally reprehensible” for the airline to undertake the flight. Privilege Style was contacted for comment.

The judge in Friday’s court hearing, Mr Justice Swift, refused to grant “interim relief” after an injunction application was made by some of the asylum seekers facing deportation to Rwanda.

The decision will not stop individual refugees from further legal challenges to their removal or a judicial review of the policy, which Swift said could take six weeks.

The policy is intended to deter people from using unofficial routes such as crossing the Channel in small boats to enter the UK and claim asylum. The numbers of people doing so has not yet dropped, but Downing Street says the impact will only be seen when the policy is fully up and running.

Critics argue that the relatively small numbers who could be sent to Rwanda will not put people off, and that the fact people with children will not be deported will simply provide an incentive to take minors on the boats.
#Priti Patel
Add Comment