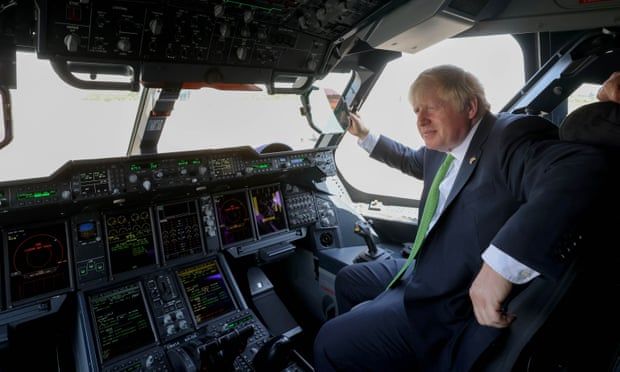 ‘Unfocused’ Boris Johnson adds to image of a government giving up

Analysis: concerns of leadership vacuum unaided by senior ministers cancelling parliamentary committee appearances
It is the time of year when younger pupils celebrate the end of the school term by bringing a board game to the classroom, thoughts of any schoolwork abandoned. It would be unfair to say that exactly the same attitude prevails inside Downing Street, but you could be forgiven for seeing a similarity.

Boris Johnson has little more than six weeks left at No 10, and a consensus is building that, as prime minister, he has already checked out – beyond some energetic and last-minute attempts to polish his legacy.

The defining visual image of Johnson’s caretaker period seems likely to be his flight in an RAF Typhoon fighter jet, including a spell at the controls – a visit No 10 tried to insist was vital first-hand experience for the person in charge of the nation’s defences.

That excuse might have had more credence if Johnson had not skipped a series of emergency meetings about the heatwave, instead delivering a slightly eccentric speech to the Farnborough airshow.

The sense of a government gradually giving up has not been helped by three senior ministers, Priti Patel, Dominic Raab and Kwasi Kwarteng, calling off scheduled appearances before parliamentary committees at the last minute.

Those who have worked with Johnson say he is less lazy than unfocused. And he has been busy in recent days, but mainly with an almost Donald Trump-like battle to burnish his record.

As well as using his final Commons appearances as prime minister to stress what he called “very remarkable” achievements in office, Johnson’s final pre-recess task was to publish a 2,500-word written statement to parliament, defending his premiership in painstaking detail.

Those still working in Johnson’s government say the public impression bears little resemblance to what is happening inside government departments, even within the constraints of the convention for caretaker leaders to not make major policy changes, or commit to significant spending.

“Government hasn’t stopped,” an aide to a senior cabinet minister said. “There are still dozens of decisions to be made a day, some of them fairly major ones, about existing policies. And these have to be made by ministers, not civil servants. It doesn’t feel very different to me.”

Paul Harrison, who was press secretary for Theresa May, says this was also the case when her successor was being chosen: “Even when the caravan is very visibly moving on, and political authority is draining away, No 10 becomes less busy but it never becomes calm. There are still decisions that need to be taken to keep the government machine turning.”

Unlike Johnson, May’s caretaker period did not fall across the parliamentary recess and she was notably more visible than her successor, who is expected to spend much of his summer enjoying Chequers, the prime ministerial country retreat. May was, however, also a different character, one distinctly less likely to be seen attempting a barrel roll in an RAF fighter jet.

Towards the end of May’s time in office, “her diary was still full”, Harrison noted. “Downing Street reflects the personality of its occupant, sometimes in an almost absurdly magnified way. So it stayed busy, mainly because I think Theresa doesn’t know how to do jobs without being busy at them. What I saw of her as PM, she’s not terribly good at relaxing.”

The idea of a PM-as-caretaker between elections only emerged in 1976, when Harold Wilson decided to step down, with the conventions created more or less on the spot by Kenneth Stowe, Wilson’s principal private secretary, and Martin Charteris, then private secretary to the Queen.

Peter Hennessy, the constitutional historian and crossbench peer, calls this “a classic example of the British constitution having been knitted together for fresh contingencies”, but also an area where this is much personal leeway.

“As always with the British premiership, everything depends on the incumbent behaving well,” Hennessy said. “So if they want to have a bit of an away day for the last few weeks in No 10, there’s not much you can do to stop them.”

However, anyone worried about a vacuum in government should be reassured, he added, by the fact this caretaker period is not so different from what happens in the weeks after a general election is called, Hennessy added.