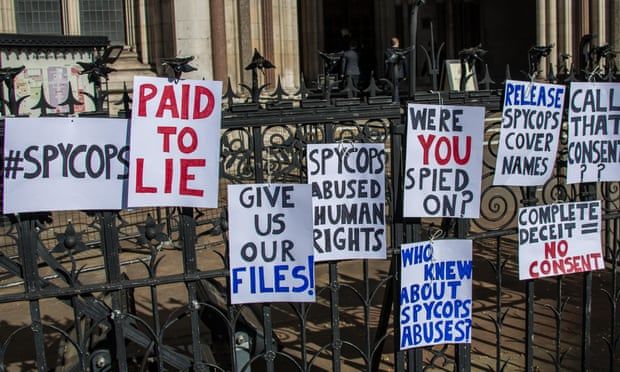 Undercover police officers who infiltrated political groups frequently spied on children as part of their covert deployments, a public inquiry has heard.

They secretly recorded the political activities of children as well as details of their parents’ domestic lives. On one occasion, an undercover officer sent back to his supervisors the babysitting rota that had been organised by leftwing campaigners.

They compiled reports about the political beliefs of children as young as 13, along with photographs of them. One of the reports included a photograph of a 17-year-old activist who was said to spend “a lot of his spare time” at his girlfriend’s home.

They also recorded the births of campaigners’ children and made comments in their reports about the lives of politically active parents, such as the fact they had a child with Down’s syndrome.

Copies of the previously secret reports, which date from the 1970s and 1980s, have been disclosed at the public inquiry examining how 139 undercover police officers spied on more than 1,000 political groups since 1968.

The disclosure of the reports highlights concerns that the police spies were overzealous in gathering information about the political and personal activities of activists they had infiltrated. The groups they spied on were predominantly leftwing and progressive.

Their reports were sent back to their supervisors and stored in huge police files. Many were routinely sent on by the police to MI5, the Security Service.

Some reports recorded deeply personal information, such as leftwing activists experiencing mental illness and depression or having an abortion. Details of socialist campaigners getting married or splitting up were also logged. One report described how a socialist moved out of her flat after her boyfriend beat her up. Others recorded the sexuality of activists.

The police spies regularly reported on the bank accounts and jobs of campaigners, along with their home addresses.

Undercover officers have been questioned by the inquiry about the justification for recording the activities of children. Some said it was their job to report anything the police could find significant. They added there were no rules or queries about recording information about children.

Gray said: “No consideration was given by me to the appropriateness of reporting on children. They were active members of the SWP taking part in demonstrations.”

During his deployment, Gray described two schoolboys, then 14 and 16, as “effeminate” in his reports on their political activities. He said these reports updated existing police files on the schoolboys and would enable police to identify them at future demonstrations. “It was normal special branch practice to keep those files current, irrespective of the age of the person,” he said.

In a report in January 1975, an undercover officer noted that a branch of the SWP (then known as the International Socialists) had drawn up a rota in which members agreed to babysit to allow other activists to attend political meetings. The report listed the name of the parents and the babysitters.

In 1972, an undercover officer, Michael Scott, spied on a meeting of the Young Liberals held at the home of Peter Hain, who later became a cabinet minister. Scott recorded Hain’s sisters, who were then 13 and 15, in his report of the meeting.

Asked by the inquiry, Scott said: “As has been shown by the Green movement, there are young ladies of a tender age that can be quite significant.”

The current round of hearings, which have examined the undercover operations in the 1970s and early 1980s, ends on Thursday.