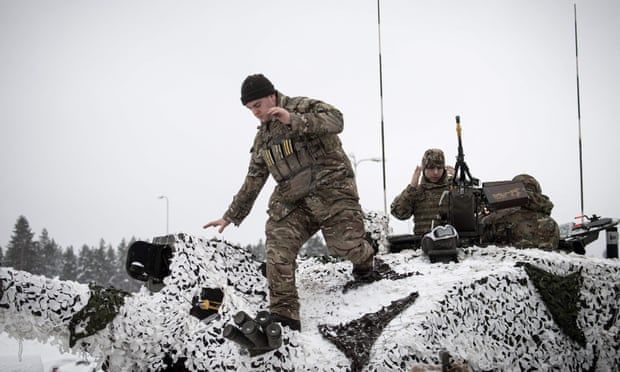 UK to send troops to Poland amid concern about Russian buildup

Britain and Poland ‘stand side by side’ as concern mounts about possible Russian invasion of Ukraine
Britain has agreed to send a further 350 troops to Poland, in a move intended to demonstrate that the two countries stand together amid concerns that the Ukraine crisis could spill over into eastern Europe.

The deployment was agreed bilaterally – meaning it takes place outside Nato’s structures – and comes a few days after the US announced it would send in 1,700 paratroop reinforcements into Poland.

Ben Wallace, the defence secretary, standing next to his Polish counterpart in London, said the aim was to send a “strong signal” to Russia that the UK and Poland “stand side by side” as Moscow moves up to 30,000 troops to neighbouring Belarus.

Mariusz Błaszczak, the Polish defence minister, said he wanted the deployment to take place “as soon as possible” and that he intended the troops would be based “east of the Vistula river”, which runs through the heart of the country. Poland borders both Ukraine and Belarus to the east.

Russia has begun sending thousands of troops into Belarus for military exercises this month, which the US and the UK fears could be used as the basis for an invasion of Ukraine – or they may end up being permanently stationed in the country.

It is part of wider buildup of an estimated 130,000 Russian troops near Ukraine’s borders. Over the weekend US officials warned that Russia had assembled around 70% of the force needed to attempt an invasion of its smaller neighbour.

Labour said it welcomed the deployment, but said “UK leadership has been missing from the top-level diplomacy required” because Boris Johnson has been fighting to survive as prime minister.

The party called on ministers to reverse a planned reduction of about 9,500 in the target size of the UK armed forces. “With threats increasing and growing Russian aggression, ministers must halt their plans to cut the army,” the shadow defence secretary, John Healey, said.

Britain already has 250 soldiers in Poland, 150 of whom are part of an existing Nato multinational protection force, and 100 of whom are engineers helping Warsaw to strengthen its borders with Belarus.

Details about which forces would be sent out were not initially available, a sign that the agreement had been hastily put together and signed off at a meeting between Wallace and Błaszczak at the Ministry of Defence in London.

But a few hours after the agreement was announced, the MoD said 350 Royal Marines would fly out to Poland “in the coming days”.

British sources indicated the extra forces would not amount to a permanent deployment in Poland. But the UK has already signalled it is willing to base extra forces in eastern Europe, offering to double its commitment to Estonia, where 900 British forces lead a Nato battlegroup.

The fact that the agreement was brokered directly between the two countries suggests that Warsaw is anxious about the growing Russian presence in Belarus, which Nato says includes Iskander missiles with a range of up to 500km (300 miles), and S-400 air defence systems.

The first US troops, paratroopers from the 82nd Airborne, from the recently announced deployment arrived in Poland over the weekend. Another 4,500 US forces are already in the country as part of Nato and bilateral missions.

Further decisions on long-term deployments in eastern Europe are expected to be discussed at a meeting of Nato defence ministers on 16-17 February.

Jens Stoltenberg, Nato’s general secretary, said at a press conference in Brussels with Poland’s president, Andrzej Duda: “We are considering more longer-term adjustments to our posture, our presence in the eastern part of the alliance. No final decision has been made on that, but there is a process now going on within Nato.”
#Boris Johnson  #Johnson
Add Comment