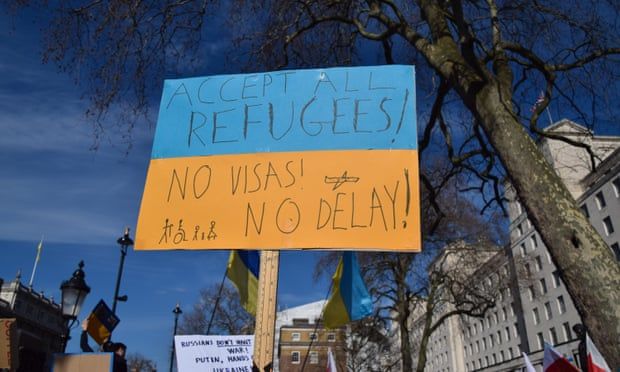 Prime minister’s announcement comes after criticism of Home Office delays in allowing refugees entry
Ukrainians fleeing the war will be able to come to the UK to join close relatives, Boris Johnson has announced, as he sought to quell a row over the bureaucracy faced by refugees from the country.

His comments are unlikely to satisfy campaigners and opposition politicians who have been angered by the failure of the Home Office to waive visa rules much more generally for Ukrainians seeking sanctuary.

“Any person settled in the UK will be able to bring their Ukrainian immediate family members to join them here,” No 10 said in a statement. “This will benefit many thousands of people who at this moment are making desperate choices about their future.”

Johnson, who announced the change alongside a £40m aid package for Ukraine, said: “In the last days the world has witnessed awe-inspiring displays of bravery and heroism from the Ukrainian people in response to those who seek to obliterate their freedom by force.

“The UK will not turn our backs in Ukraine’s hour of need.”

The Home Office said that the PM’s announcement did amount to a change of policy, but it said that further details would be released in due course.

Yvette Cooper, the shadow home secretary, said: “This is a welcome first step forward and should have happened days ago.

“Now, the government should also work with European countries on a wider sanctuary arrangement so the UK can also do its bit alongside others to help Ukraine.”

Twenty-four hours earlier, Kevin Foster, the immigration minister, provoked outrage by posting a message on Twitter saying there were “a number of routes, not least our seasonal worker scheme” for Ukrainians wanting visas to visit the UK.

Foster subsequently deleted his tweet, but David Lammy, the shadow foreign secretary, said it was “totally unacceptable” and that the government should be much more hospitable to Ukrainian refugees.

Lammy said it was “immoral” to be imposing bureaucracy and red tape on people who were fleeing war.

“People are fleeing with their children in their arms,” he said. “Why would you ask people how rich they are to enter our country? Of course, there are some people who may not have family ties, but want to come into this country.

“That’s the sort of generosity that the British people expect. Frankly, suggesting that people should use this scheme that effectively fruit pickers come to this country on is totally, totally unacceptable.”

Although the government has made minor changes to visa rule for Ukranians in recent days, people still in Ukraine who do not have British relatives have been unable to make a visa application from that country. Ireland has dropped its requirement for Ukrainians to have a visa before they enter the country, although refugees will be expected to get permission to be in the country after their arrival.

The Guardian spoke to the UK resident Nataliya Rumyantseva, the daughter of 69-year-old Valentyna Klymova who escaped from Kharkiv where fighting is under way and who has been denied entry to the UK. She may be affected by the change announced by the PM on Sunday night.

Klymova escaped to Hungary from where she took a flight to Paris – under European Schengen rules, visa-free travel between countries is permitted for several months. From there she was hoping to fly to the UK to join her daughter, an academic who works in London and has indefinite leave to remain. But UK Border Force officials rejected the travel request and wrote on a form ,“No entry clearance.”

“The Border Force official was quite defensive,” Rumyantseva told the Guardian. “She said: ‘I can’t just allow her to come into the UK.’ She said that my mother could claim asylum in France. But she doesn’t speak the language and I want her to be with me for now.”

The official said Klymova could go to the British embassy in Paris on Monday and apply for a visa to visit the UK. However, those applying for a visit visa have had to give an undertaking to return home after six months and at the moment, with the uncertainty of the situation in Ukraine, there were fears the Home Office could refuse to grant this kind of visa.

The only visa option currently available for Klymova has been a standard visit visa. The family’s lawyers submitted an application for this visa on Sunday.

Enver Solomon, the head of the Refugee Council, said: “We urgently need the government to announce a clear plan which immediately relaxes visa requirements to allow family members of Ukrainians in the UK to join them here.

“We must uphold our tradition of supporting people fleeing war and persecution by sending a clear signal to Ukrainian families that they are welcome in the UK.”
#Boris Johnson  #Johnson
Add Comment