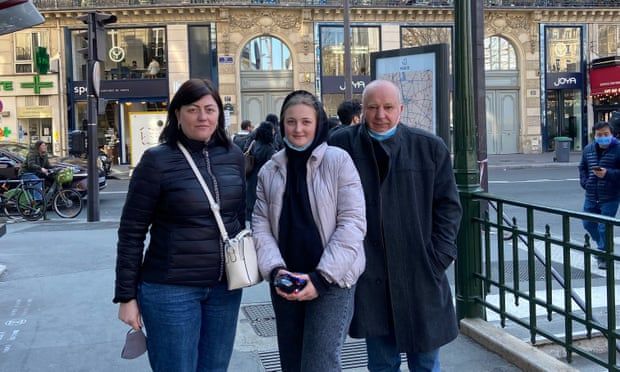 ‘The treatment we received from the French and the British has been so different,’ says father Yakiv Voloshchuk
A Ukrainian mother and daughter fleeing the war finally arrived on UK soil on Monday evening, after more than a week of grappling with visa problems with British officials in France.

Before the family could reach the UK, Oksana Voloshchuk, 40, whose husband is a British citizen of Ukrainian heritage and a former London bus driver, and the couple’s daughter Veronika Voloshchuk, 15, were twice detained by UK Border Force officials in Calais, made eight trips to the UK visa processing centre in Paris, two trips to the British consulate there and one trip to the British embassy.

They spent five nights in a hotel in Paris waiting for the visas to be processed and after running short of money spent three nights at a farm and chateau in Burgundy thanks to the kindness of the owner.

Veronika has Type 1 diabetes and her father, Yakiv Voloshchuk, said the stress of spending more than a week in France trying to obtain the visas caused worrying spikes in her blood sugar levels. He has disabilities following a stroke more than a decade ago.

Yakiv left his London home the day after the war started on 25 February and drove to Ukraine’s border with Poland to rescue his wife and daughter. Reuniting with them on the edge of a war zone appeared more straightforward than obtaining the UK visas.

He travelled from the UK to France by ferry, explained to immigration officials in Dover that he was rescuing family members from a war zone and asked what paperwork would be needed to bring his family into the UK.

He said he was told none would be needed and that the family should simply present themselves to officials in Calais after he had reunited with them.

The family did this on 27 February but were told by UK immigration officials that Oksana and Veronika would be refused permission to enter the UK. Both were detained for five hours. They were detained a second time on Monday (7 March) for just over an hour even though by this time the mother and daughter had their visas in their passports. They were temporarily detained under what is known as IS81, which gives immigration officers “authority to detain for further examination”.

“In Paris they said to fill in an online form, but we got to the bit where they were asking for £2,200 per person for medical insurance and could get no further. So we went to the British embassy to ask for help. I showed my British passport but the embassy said they couldn’t do anything to help and we were in the wrong place,” said Yakiv.

“Then we went to the British consulate. Here we found the only helpful British person we had come across. He gave us €50 so we could take a taxi to a hotel and he called the visa section to ask them to help us fill in the form.”

The Voloshchuks were put in touch with Sarah Preston, an English woman living in Burgundy, who has been helping Ukrainians fleeing the war find accommodation.

The family was put up by Michel Guyot who owns the Château de Saint-Fargeau in Burgundy, which has a farm and guest accommodation.

“Everyone in Poland and France was wonderful to Ukrainians. We are not coming by choice but because of war and we are not coming to collect benefits. I have a house where my family can stay. Once my daughter has learned English she can go to school and my wife can work,” said Yakiv.

Oksana said: “People are being shuttled back and forth between Calais and Paris. Why not set up two computers and five people in Calais to check biometric passports and issue visas. There are people with no money, no car, with babies, being pushed back and forth.”

Yakiv said that while the family was happy to now be together and safe in the UK, they were all deeply traumatised by the war and scanning the news every minute. Their experience with the British authorities in Paris had compounded that trauma.

“The treatment we received from the French and the British has been so different. The French were so lovely. I can’t understand why the British could do nothing to help us.”

A government spokesperson said: “We are working to process applications as quickly as possible and submitting an application in English reduces delays, which means we can get people here more efficiently. However, if someone is unable to provide translated documents they should still submit their application with untranslated documents. Support is available to applicants through our free 24/7 helpline and in visa application centres.”
Add Comment