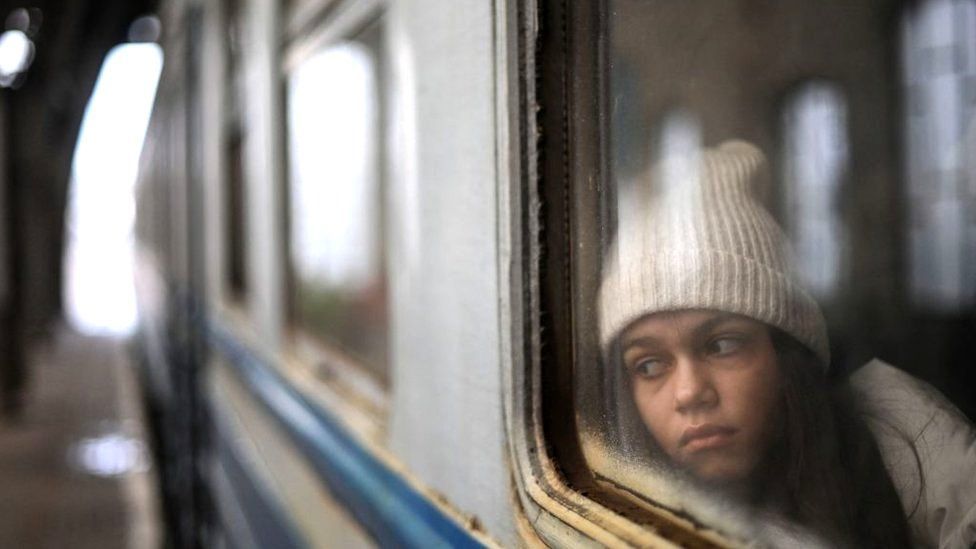 Fifty Ukrainians have been granted visas under a scheme for refugees with family links to the UK, the Home Office has announced.

It is about 1% of the 5,535 people who have applied since the programme launched 48 hours earlier.

Home Secretary Priti Patel said she was "doing everything possible" to speed up efforts to issue the travel permits.

The Ukrainian ambassador praised the UK effort but urged for the "maximum" number of people to be admitted.

The UK has steadily increased its visa offer to refugees from the Ukraine war, extending it to parents, grandparents and siblings as well as "immediate family" and extending the visas to three years.

But it has faced criticism that its scheme is less generous than the European Union's, while France accused the UK of a "lack of humanity", saying that 150 refugees were turned back at Calais for lacking a visa.

Earlier this week, Prime Minister Boris Johnson said 200,000 Ukrainians would be eligible to travel to the UK as he extended the offer of visas to a wider range of family members.

It added that 2,368 had booked a visa appointment to submit their application and biometric information, while "around 50" visas had been granted.

Asked if it was acceptable that about 1% of applications had been granted in the first 48 hours of the scheme, Ms Patel said it was "the first scheme in the world that's up and running in this short period of time".

"This is an incredible scheme and we are doing everything possible, surging capacity across every single application centre across the EU," she said, adding that staff were being flown into Ukraine's border countries to speed up applications.

Ukraine's immediate neighbours have taken in the majority of the 1.5 million people estimated to have fled the war, with more than half of them arriving in Poland.

'Not turning people back'

France's Interior Minister Gerald Darmanin wrote to Ms Patel on Saturday, saying that 400 Ukrainian refugees had arrived at Calais to cross the Channel, but 150 were sent back and told to obtain UK visas at embassies in Paris or Brussels.

Mr Darmanin said the response to people in distress was "completely unsuitable" and showed a "lack of humanity", calling for the UK to put consular staff at Calais to help Ukrainian refugees cross.

But Ms Patel said it was "wrong to say we are turning people back" and said the Home Office already has people working in Calais to support Ukrainian families.

Vadym Prystaiko, Ukraine's ambassador to the UK, said that the visa process could be simplified, adding that any issues could be resolved later but right now the "maximum" number needed to be admitted.

He said any "bureaucratic nonsense" should be cleared away, although he said it was necessary to continue security checks.

But he said the UK was at the "forefront of the effort" to support Ukraine.