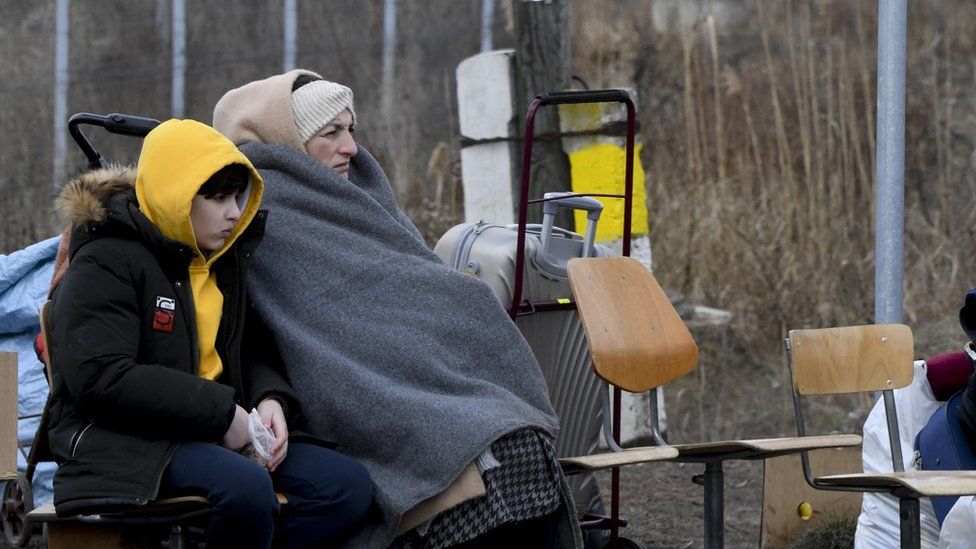 Boris Johnson has promised to be "very generous" towards Ukrainian refugees, amid criticism over the number who have been granted visas.

The Home Office says 300 visas have been issued since Russia invaded Ukraine - up from 50 on Sunday.

The figure comes amid confusion over whether access will be widened beyond the current schemes.

Labour says the situation regarding refugees is a "mess" and that clearer rules are urgently needed.

The two UK schemes announced so far require Ukrainians either to have family in the UK, or have a designated UK sponsor for their application.

Home Secretary Priti Patel told the Sun she was examining "legal options" to grant humanitarian access to people "without ties to the UK".

But the prime minister did not confirm whether a new route would be set up when questioned on Monday, saying only that the UK would have a "very generous and open approach" to refugees.

However, Boris Johnson said the UK would not "abandon controls altogether" on those wanting to come to the country, adding it was "sensible" to "have some basic ability to check who is coming in and who isn't".

More than 1.7 million people have fled Ukraine since Russia invaded, according to the United Nations.

Most are in neighbouring countries, with the Polish border agency saying on Monday that more than one million people have now crossed into Poland.

Foreign Office Minister James Cleverly said Ukrainian refugees preferred to stay in the region - and the UK was providing humanitarian support to those in neighbouring countries.

The UK has steadily increased its visa offer to refugees.

This includes widening the range of family members that allow Ukrainians with relatives in the UK to apply for visas and creating a second route allowing UK-based organisations to sponsor applications - with details to be set out this week.

But the government has faced criticism that its scheme is less generous than the EU's.

The UK had been warning about a possible Russian invasion of Ukraine for many weeks.

The likelihood of a refugee crisis was known.

And yet there is a sense of Whitehall scrambling to refit its new immigration and asylum policy to the reality of refugees fleeing war in Europe.

In contrast to the EU's policy, Ukrainians wanting to come to the UK need a visa - obtained either through existing family links or a sponsor.

But Home Secretary Priti Patel told the Sun newspaper she was considering a new route for refugees to come to the UK.

Cue a day of confusion as ministers insisted that wasn't the case.

The problem could be the ambiguity of Ms Patel's words.

Or it reveals confusion within Whitehall about what should be done as the exodus from Ukraine continues and public concern grows.

The Home Office said 8,900 applications had been submitted for visas via the Ukraine Family Scheme, with 300 issued so far.

It added that it had "surged" staff in nearby countries to process cases as quickly as possible.

But Labour leader Sir Keir Starmer said the government should be offering a "simple route to sanctuary" for people in danger.

"The Home Office is in a complete mess about this. They keep changing the rules," he said.

The government is also facing pressure over the situation in Calais, where there now are more than 500 Ukrainians hoping to get to the UK.