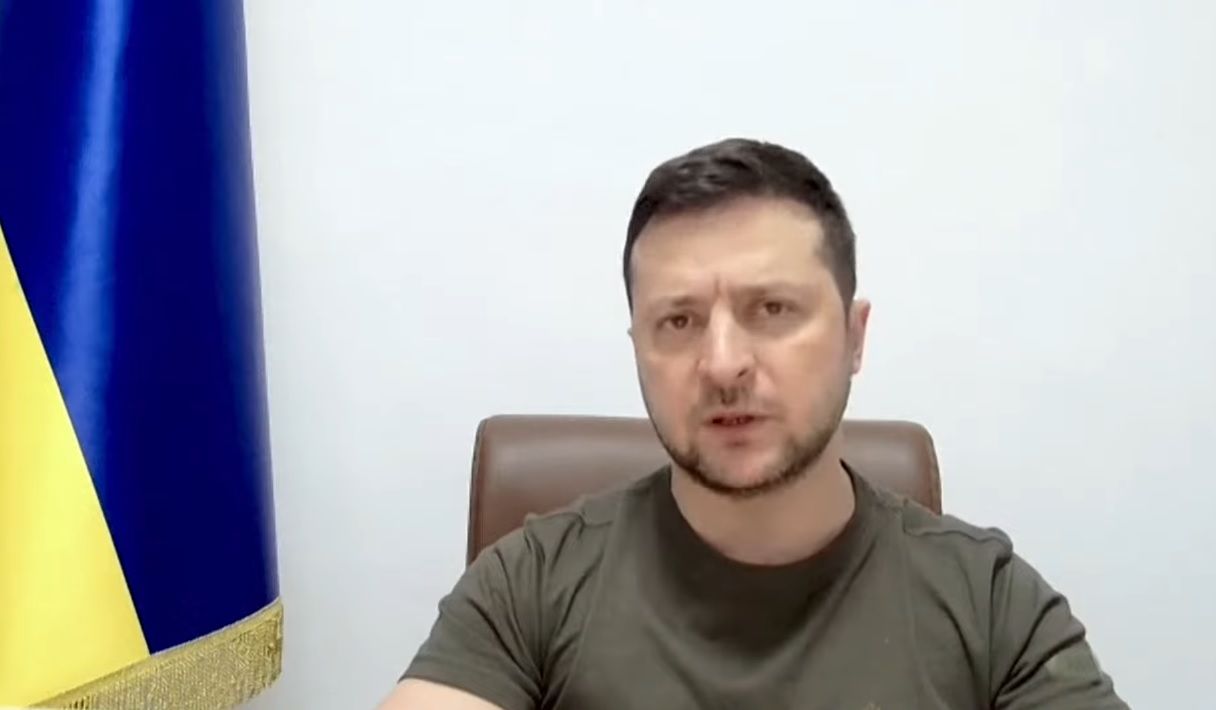 Volodymyr Zelensky has invoked the words of Britain's wartime leader Winston Churchill as he appealed to MPs for more help at home.

The Ukrainian president spoke to the Commons via video, thanking the UK for its support since Russia's invasion, and receiving a standing ovation.

But he called for Russia to be named a "terrorist state" and for allies to "make sure our skies are safe".

"We will not surrender, we will not lose, we will go to the end," he added.

Prime Minister Boris Johnson said the leader had "moved the hearts of everybody" watching, and pledged to "press on with tightening the economic vice" around Russian President Vladimir Putin.

Labour leader Sir Keir Starmer also praised "the bravery [and] the resolve" of the president and his people, adding: "He has shown his strength and we must show him - and the Ukrainian people - our commitment and support."

Speaking to MPs and peers in the Commons, President Zelensky gave a day-by-day account of the invasion by Russia, which began a fortnight ago.

He described how it was a war Ukraine "didn't start and we didn't want", but his country now had to fight.

The president also spoke of the 50 children "that could have lived" but were killed by Russian forces, along with those of his people dying from dehydration where their cities had been blockaded by Russia. 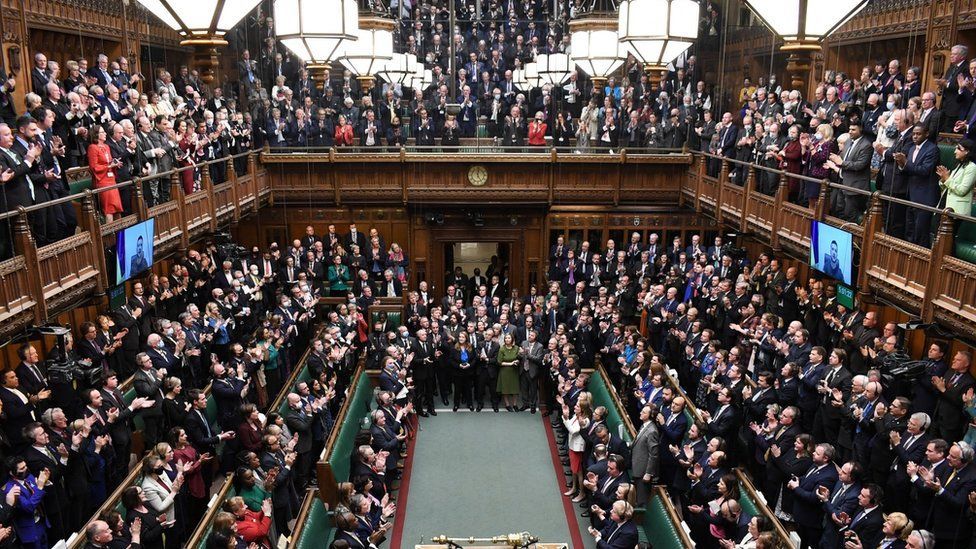 In a nod to one of former British Prime Minister Winston Churchill's famous speeches from 1940, the president said he wanted to "remind you of the words Britain heard already, which become current again".

He said: "We will not surrender, we will not lose, we will go to the end.

"We will fight everywhere… and we will not surrender."

He also turned to a William Shakespeare quote in his address.

"To be or not to be," said President Zelensky. "You know the Shakespeare question very well.

"Thirteen days and that question still could have applied to Ukraine.

Alongside his British cultural references, President Zelensky also hinted towards his previous appeal for a no-fly zone over Ukraine, saying: "We still have the sky open, it is still open to Russian missiles planes and helicopters."

The leader concluded his speech by saying: "Do what you can, do what you must, because greatness obliges greatness, of your state and your people.

"Glory to Ukraine and glory to Great Britain."

MPs crammed into every corner. Members of the House of Lords packed the public galleries high in the chamber. Parliamentary staff huddled close to peer through the stone arches, almost in the roof, to watch.

After a few minutes of chatter, with MPs fiddling with their headsets to ensure they would be able to hear the translation of the speech, there was hush.

Then alone at his desk, only a Ukrainian flag for company, President Volodymyr Zelensky appeared on screens to speak to MPs and, of course, to the country.

Ukraine's leader told of his country's pain as each day, a war "we did not start" progressed. Bombs falling on schools. Churches destroyed. Children's hospitals attacked. Food and water running low in some parts.

He thanked the UK for its support, urging the government to tighten sanctions still further, to protect Ukraine's skies, even though enforcing a no-fly zone is a step - a risk - that the UK and its allies just aren't willing to take yet.

Yet the message that brought tears to some MPs' eyes was Mr Zelenksy's utter defiance.

Leaders of the main political parties in the Commons then made speeches to praise President Zelensky's efforts against the Russian Invasion.

Mr Johnson said: "At this moment, ordinary Ukrainians are defending their homes and their families against a brutal assault, and they are by their actions inspiring millions with their courage and their devotion.

"And I think today, one of the proudest boasts in the free world is, 'Ya Ukrainets' - 'I am a Ukrainian'."

"No-one would have blamed him for fleeing. But instead, he has stayed in Kyiv to lead the Ukrainian people and to fight.

SNP Westminster leader Ian Blackford also said he saluted the Ukrainian leader, adding: "We stand with the people of Ukraine on the basis of the act of aggression, on the act of war of Putin.

"We must do all that we can to send support to Ukraine, to send the weapons that they need to defend themselves, to make sure that we sanction the regime in Moscow, that we deliver the clearest message to President Putin - that this will end in failure for him, that he will face justice at the international court."

President Zelensky: We will not give up, and we will not lose, we will fight to the end... whatever the cost
#Boris Johnson  #Johnson
Add Comment