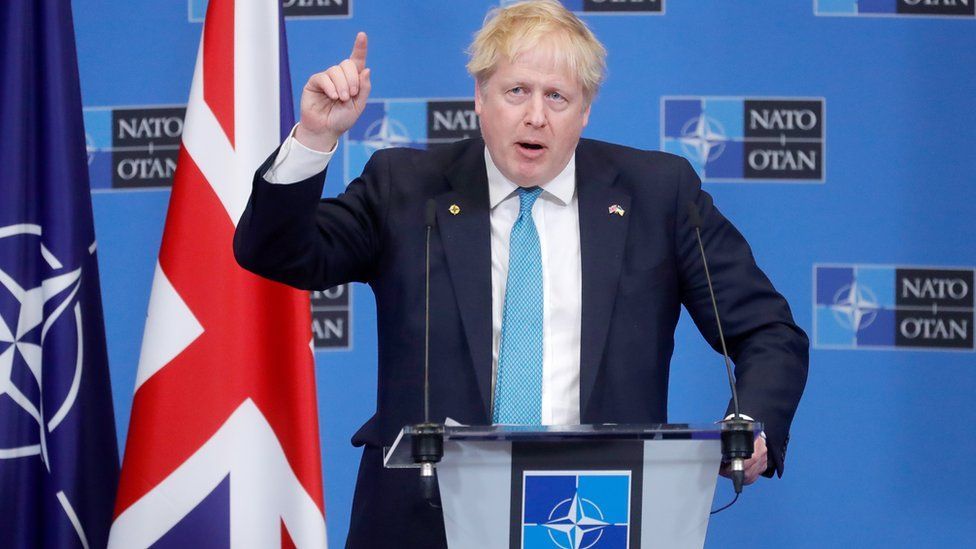 Ukraine not alone in fight against Russia, says Boris Johnson

Ukraine is "not alone" in its fight against Russia's invasion, Prime Minister Boris Johnson has said.

He said the UK would not stand by while Vladimir Putin "vents his fury on Ukraine" and would work to ramp up defensive weaponry for the country.

Speaking in Brussels, he warned that, if the Russian president used chemical weapons, the consequences would be "catastrophic for him".

Mr Johnson later told BBC Newsnight that Russia did not want peace, and instead wanted to intensify its attack on Ukraine.

Leaders from Nato, the EU, and the G7 have been holding emergency meetings in Brussels to discuss the conflict.

Speaking at a news conference following the Nato summit, Mr Johnson defended the level of the UK's support for Ukraine, saying the government planned to send 6,000 more missiles to the country as well as an extra £25m in aid to help Ukraine pay the salaries of its armed forces.

The PM said kit would be provided to Ukraine to defend against "its bullying neighbour".

Mr Johnson also promised a new deployment of UK troops to Bulgaria, on top of doubling troops both in Poland and in Estonia.

It follows Nato's earlier announcement that new battle groups would be created in Bulgaria, Hungary, Romania, and Slovakia.

"The message Putin can take is: Ukraine is not alone. We stand with the people of Kyiv, Mariupol, Lviv and Donetsk," Mr Johnson said.

"As President Zelensky himself has said, the people of Ukraine must prevail and Putin must fail - and he will."

Mr Johnson added that Western nations were looking to "steadily ratchet up" the amount of military gear they are sending Ukraine, but that it was proving "difficult" to meet the country's request for warplanes and tanks.

In a virtual appearance at the summit earlier, Ukrainian President Volodymyr Zelensky's asked Nato for "1% of all your planes, 1% of all your tanks".

Mr Johnson said: "What President Zelensky wants is to try to relieve Mariupol and to help the thousands of Ukrainian fighters in the city. To that end he does need armour, as he sees it."

"We are looking at what we can do to help. But logistically it looks very difficult both with armour and with jets."

Mr Johnson added that no Western power was looking to put "boots on the ground" or impose a no-fly zone over Ukraine.

He acknowledged that the Ukrainian president wanted more from Nato, saying allies felt "agony" about their "inability to do more given the constraints we face".

The UK government has already given £400m in humanitarian and economic aid to Ukraine and its neighbouring nations since Russia's invasion last month.

The PM said ministers had sanctioned more than 1,000 Russian individuals and entities so far in the toughest sanctions the UK had ever imposed.

The Wagner Group, a private military firm thought to function as an arms-length unit of the Russian military, was among the 65 entities hit by the latest sanctions announced by the UK earlier.

Also targeted were Gazprombank, the country's third-largest bank and one of the main channels for payments for Russian oil and gas, and the state-run shipping firm Sovcomflot.

The stepdaughter of Russian foreign minister Sergei Lavrov, Polina Kovaleva, who is thought to own a London property worth an estimated £4m, was also targeted by the measures.

Earlier, Mr Johnson called on the West to consider measures to prevent Russia using its gold reserves to prop up its currency, the rouble.

He told the news conference the Kremlin was "trying to get around the sanctions on their gold" and the UK and others were trying to ensure there was "no leakage or no sale of bullion into markets around the world".

The prime minister said he was not "remotely anti-Russian" after the Kremlin labelled him the "most active participant in the race to be anti-Russian".

He said that, while one could be sympathetic to ordinary Russians, the way Mr Putin was leading Russia was "utterly catastrophic" and his invasion of Ukraine was "inhuman and barbaric".

Mr Johnson dismissed talk about the use of nuclear weapons as a "distraction" from what was happening in Ukraine - where he said Russia's use of conventional weapons against "innocent people" had been "absolutely barbaric".

He warned that any use of chemical or biological weapons in Ukraine by Russia would be "disastrous for Putin".

"There is a visceral horror of the use of these weapons of mass destruction. I think that if Putin were to engage in anything like that the consequences would be very, very severe.

"You have to have a bit of ambiguity about your response but I think it would be catastrophic for him if he were to do that. And I think that he understands that."

In an interview with the BBC Newsnight Mr Johnson said Ukraine can win the war with Russia - not necessarily on the battlefield, but by making an occupation impossible.

"There's a sense in which Putin has already failed, or lost, because I think that he had literally no idea that the Ukrainians were going to mount the resistance that they are and he totally misunderstood what Ukraine is - and, far from extinguishing Ukraine as a nation, he's solidified it... He can't subjugate Ukraine."

The prime minister added that he was "not optimistic" the Russian president truly wanted peace, and that he had instead decided to "double down" in his assault on Ukraine which he said was a "tragic mistake."

US President Joe Biden warned any use of chemical weapons by Mr Putin would be met with a "response", the nature of which "would depend on the nature of the use".

Mr Biden said the Russian President had "miscalculated" in his decision to invade Ukraine, and had banked on "Nato being split".

"Nato has never, never been more united. Putin is getting exactly the opposite of (what) he intended to have as a consequence of going into Ukraine."