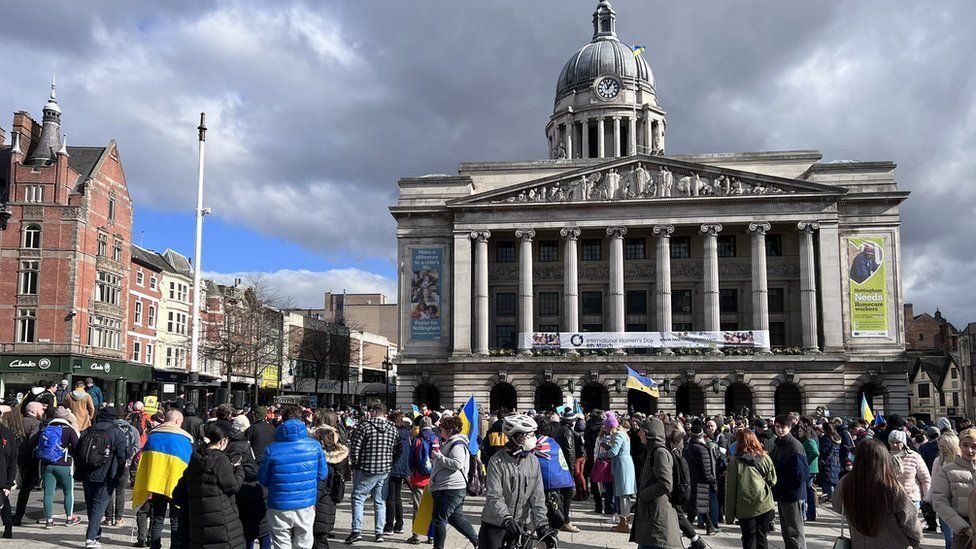 Hundreds of people have attended protests across the country against Russia's invasion of Ukraine.

In Nottingham more than 200 people gathered in the city's Market Square outside the Council House which has been flying the Ukrainian flag.

It was one of 60 events that took place in the UK on Sunday for the Global Day of Action to support Ukrainians.

David Dowbenko who attended said it "was gratifying" to see the amount of support from people of all backgrounds.

"It's really heart rending," said Mr Dowbenko, who has a Ukrainian father, and is a committee member at the Nottingham Ukrainian Cultural Centre.

"People were very passionate. The support we have had from local people in Nottingham has been absolutely fantastic.

"It feels like everybody is on our side and wants to support us. It's unbelievable."

He said it was "very emotional" and added: "A heartfelt thanks from our country to yours." 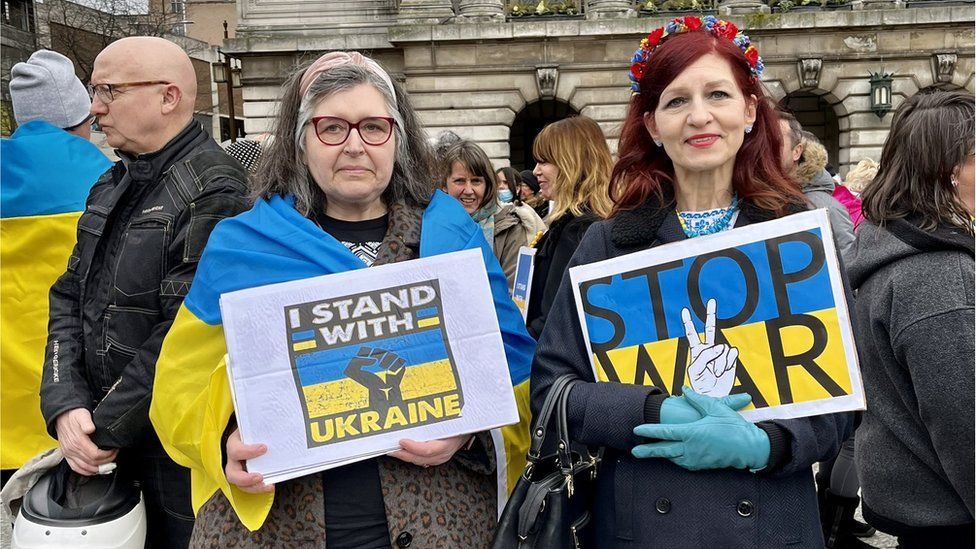 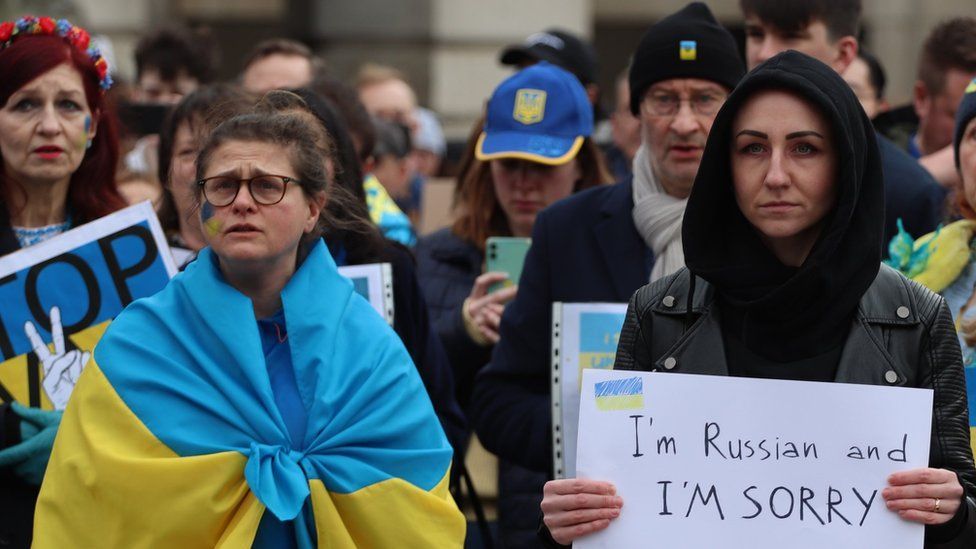 The demnstration was one of 60 being held in the UK on Sunday
Mike Holod, head of the Nottingham Ukrainian Cultural Centre, trade unions, the Polish scouts and Nadia Whittome, Labour MP for Nottingham East all gave speeches.

Earlier this week, Nottingham City Council, said it had severed its ties with Minsk in Belarus and Krasnodar in Russia in solidarity with Ukraine. 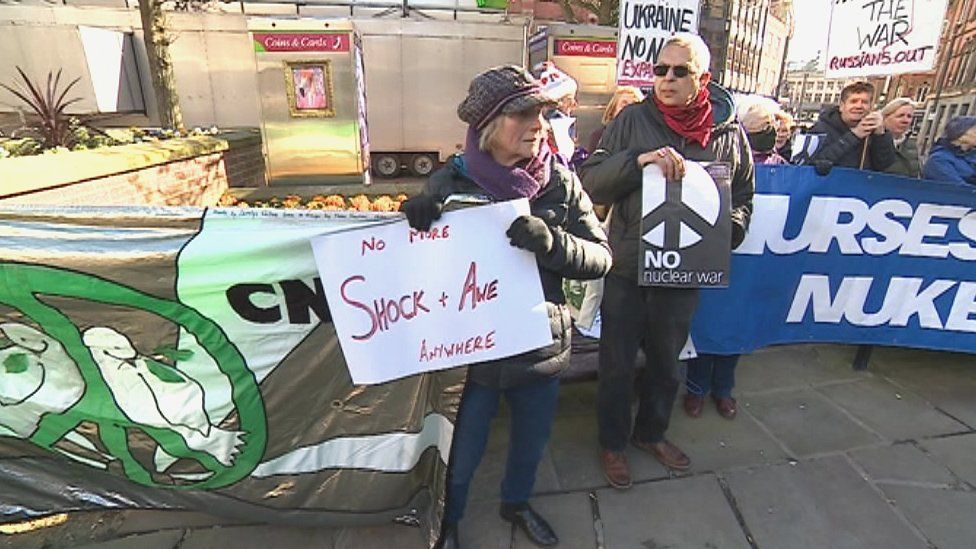 There was also a protest in Derby's main square

Viv Ring organised a similar protest in Derby after seeing the news coming from Ukraine.

"I'm one of a number of people who felt it was important to be here because it's a global day of action to support the people of Ukraine," she said.

"I'm just a person in Derby but I recognise that the dynamic of this is just not working."

There were further demonstrations including in Brighton, Bristol, Southampton and Cardiff, as well as around the world in Australia, Germany and Japan.

Hundreds of people marched across the main bridge between Devon and Cornwall, the Tamar Bridge, in a show of solidarity, dressed in blue and yellow.

Musicians gathered in Truro to perform the Great Gate of Kyiv and the Ukrainian national anthem. 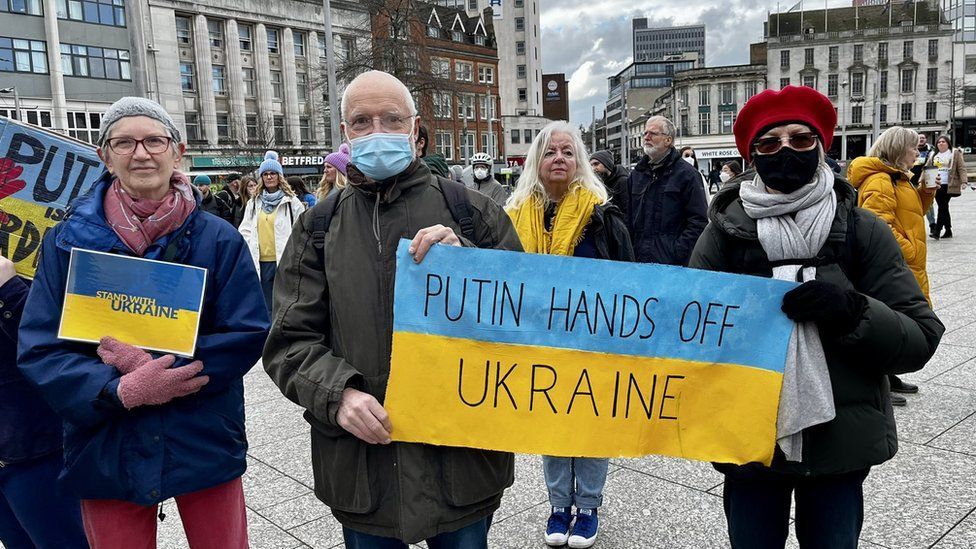 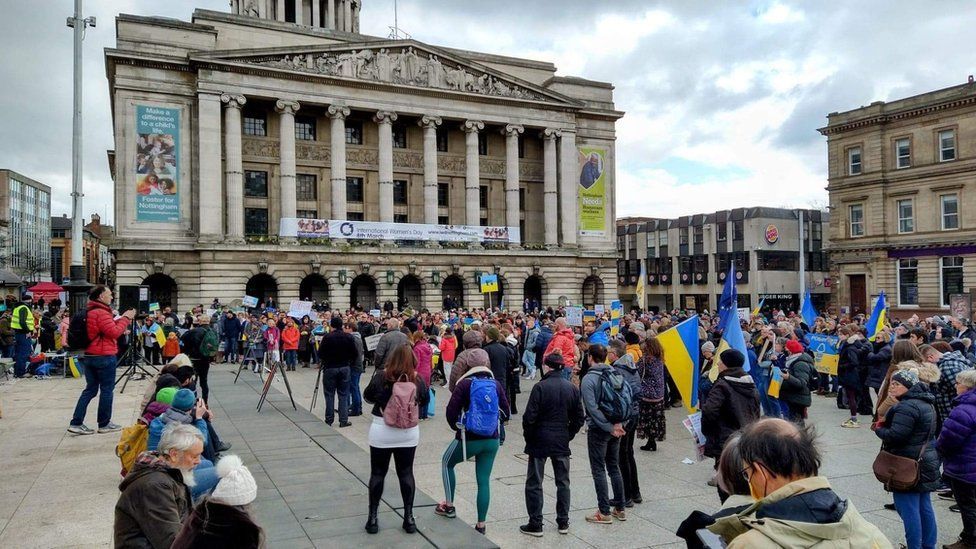 The protest was part of a global day of action

On Saturday, hundreds gathered in London's Trafalgar Square to protest against Russia's invasion.

Vigils were also held in the West Country and hundreds marched through Shrewsbury as they said they felt "had to do something".