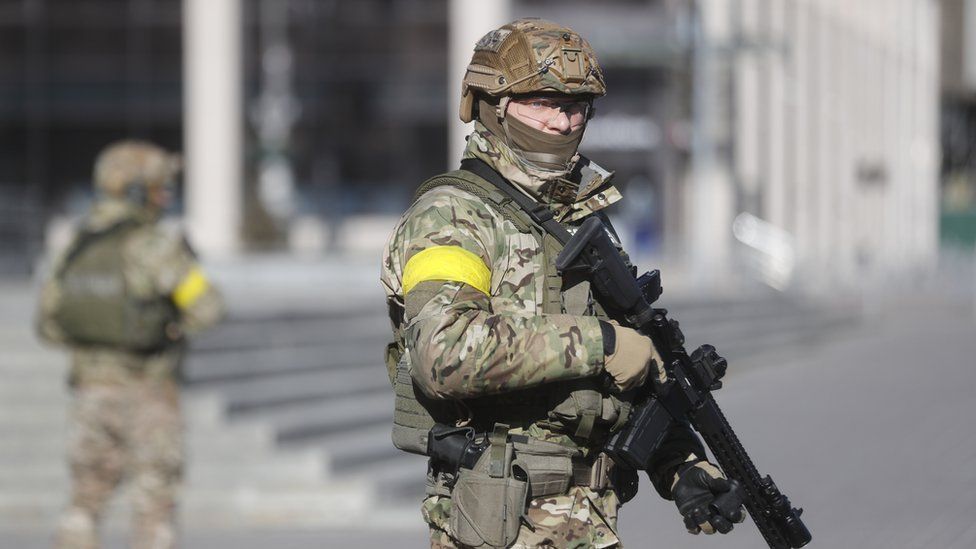 Vladimir Putin put Russia's nuclear forces on high alert after comments by UK Foreign Secretary Liz Truss and others, the Kremlin has said.

Kremlin spokesman Dmitry Peskov said "unacceptable" remarks were made about possible "clashes" between Nato and Moscow over Russia's attack on Ukraine.

It is unclear precisely which comments by Ms Truss Russia objects to.

On Sunday, she said if Russia was not stopped, other states may be threatened and it could end in conflict with Nato.

A Foreign, Commonwealth and Development Office source told the BBC: "I don't think anything Liz has said warrants that sort of rhetoric or escalation."

They said the foreign secretary had always spoken about Nato as a "defensive alliance" and that the UK needed to support Ukraine.

Echoing comments by Defence Secretary Ben Wallace earlier, the source insisted the UK wanted to avoid "any sort of miscalculation".

Speaking at a press briefing on Monday, Mr Peskov said: "Statements were made by various representatives at various levels on possible altercations or even collisions and clashes between Nato and Russia.

"We believe that such statements are absolutely unacceptable. I would not call the authors of these statements by name, although it was the British foreign minister."

Speaking to Sky News's Trevor Phillips on Sunday, Ms Truss warned that if the Russian president was not stopped in Ukraine, there could be "conflict" between Russia and Nato.

"This long-running conflict is about freedom and democracy in Europe," she said.

"If we don't stop Putin in Ukraine, we are going to see others under threat: the Baltics, Poland, Moldova, and it could end up in a conflict with Nato. We do not want to go there."

There will also be an export ban on "high-end technological equipment" including marine and navigation equipment which "will blunt Russia's military industrial capabilities and act as a drag on Russia's economy for years to come".

She said there would be "economic hardship" for the UK and its allies as a result of the sanctions but said it was "nothing compared to those endured by the people of Ukraine", adding that "Putin must lose".

The UK has already introduced a range of sanctions - including some against Mr Putin and Russian Foreign Minister Sergey Lavrov. Ms Truss said the government would target a "hit list" of Russian oligarchs "focusing on their houses, their yachts and every aspect of their lives".

Ms Truss will go to a meeting of the United Nations Human Rights Council (UNHRC) in Geneva on Tuesday, where she is expected to say Mr Putin is "violating human rights on an industrial scale".

The foreign secretary had told the BBC's Sunday Morning programme she supported people from the UK who might choose to go to Ukraine to help it fight Russia.

Mr Wallace has since said people without military training should not travel to Ukraine to fight, warning it was dangerous, and said Ms Truss had not been suggesting untrained people should make the journey.

Speaking on Monday afternoon, the prime minister's official spokesman said that while No 10 recognised the "strength of feeling" from British people wanting to support Ukraine the government was currently advising against travelling to the country.

Mr Putin said he had placed Moscow's nuclear forces on "special alert" due to "aggressive statements" by the West, amid widespread international condemnation of his invasion of Ukraine.

Mr Putin's announcement does not mean Russia intends to use its nuclear weapons.

His order attracted international condemnation, with the US branding it an "unacceptable escalation".

The EU responded by unveiling further sanctions against Moscow, including banning all Russian aircraft from its airspace.

She also called on oil and gas companies to stop doing business in Russia.

Mr Wallace said Russia's heightened nuclear alert was an attempt by the Kremlin to "distract" from what was "going wrong" with its assault on Ukraine.

The defence secretary sought to reassure the public over Mr Putin's order, telling BBC Breakfast that the government did not recognise in the phrase he described anything "that is a change to what they have currently as their nuclear posture".

Prime Minister Boris Johnson is set to travel to Poland and Estonia for meetings with his counterparts and Nato secretary-general Jens Stoltenberg on Tuesday, No 10 has said.

In other UK developments:

*  All UK ports have been told not to let any Russian "flagged, registered, owned, controlled, chartered or operated vessels" to have access, Transport Secretary Grant Shapps said

The Russian invasion of Ukraine entered its fifth day on Monday, with heavy fighting continuing across the country including at Kharkiv - where officials reported dozens of people were killed in missile strikes.

More than half a million people have fled their homes to escape the war, the UN said, with major cities - including the capital, Kyiv, and Chernihiv - remaining under Russian attack.

Negotiators for Kyiv and Moscow met for talks on Ukraine's border with Belarus on Monday.

Before the talks Mr Zelensky said he did not expect a breakthrough but his delegation would attend because of the "small chance to end the war".

Foreign secretary Liz Truss: "This is all about flushing out the oligarchs' dirty money from the UK"
#Boris Johnson  #Priti Patel  #Johnson
Add Comment