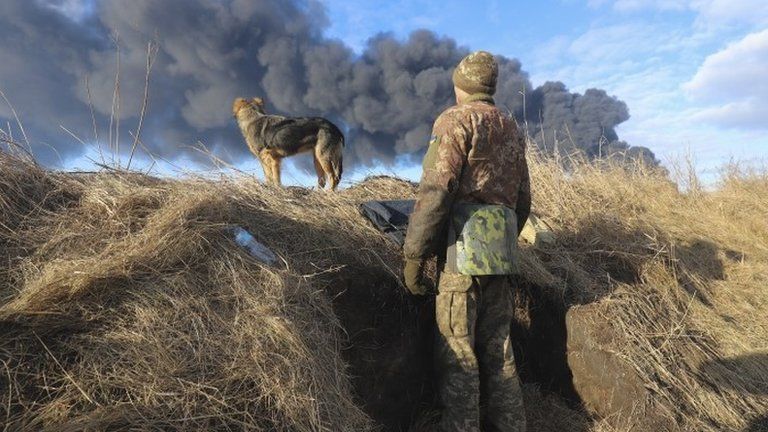 Foreign Secretary Liz Truss has said she supports individuals from the UK who might want to go to Ukraine to join an international force to fight.

She told the BBC it was up to people to make their own decisions, but argued it was a battle "for democracy".

She said Ukrainians were fighting for freedom, "not just for Ukraine but for the whole of Europe".

Ukraine's President Volodymyr Zelensky has urged foreign nationals "to join the defence of security in Europe".

Earlier on Sunday, he said Ukraine was setting up an "international" legion of volunteers for foreigners wishing to join the Ukrainian army in its fight against Russian forces.

"This is not just Russia's invasion of Ukraine, this is the beginning of a war against Europe. Against European unity," Mr Zelensky was quoted as saying on his official website.

"Everyone who wants to join the defence of security in Europe and the world may come and stand shoulder to shoulder with Ukrainians against the invaders of the 21st Century."

The UK government has stressed that British troops will not be sent to fight on the ground. Defence Secretary Ben Wallace said Ukraine would instead be supported to "fight every street with every piece of equipment we can get to them".

Ukrainian forces say they have repelled an attack on the country's second city Kharkiv after fierce clashes with Russian forces.

Ukraine's ambassador to the UK Vadym Prystaiko said an "overwhelming" number of foreign nationals were "demanding to be allowed to fight" for Ukraine - as the Russian invasion reaches its fourth day. Ukraine has said it will arm all volunteers.

At the scene: Heading home to fight

by Vitaliy Shevchenko, in Folkestone, Kent 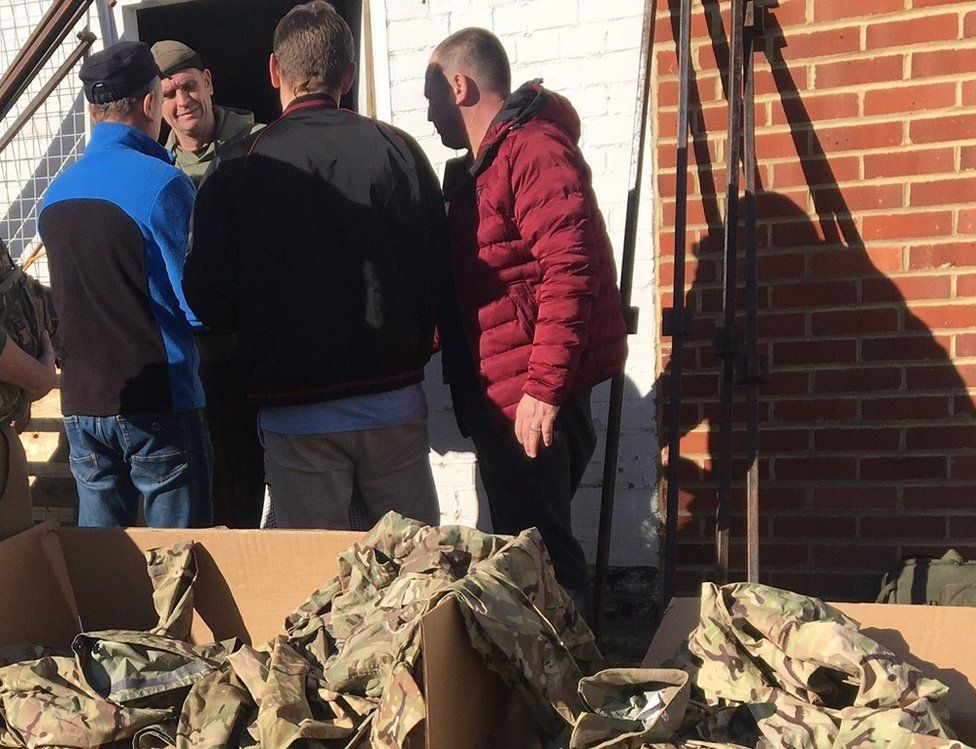 As missiles rain down on Ukrainian cities and Russian tanks are pouring in, Ukrainians in London are giving up their jobs to return home and fight for their country. I spent Saturday with some of them.

I met Viktor, Oleh, and Yevhen - who asked to be identified with just their first names - as they drove to the seaside town of Folkestone in Kent, which has become the unlikely hub for Ukrainians returning home to fight. The reason is a local military surplus store with a sympathetic owner.

"The West hasn't done enough to help Ukraine, so I'm more than happy to," the owner, who calls himself Wozzer, told me. His discounts were good, and some of his kit - such as boots - was free to take.

The place was swarming with Ukrainians, their sense of purpose palpable.

As Viktor stocked up on basic supplies like flak jackets, helmets and tourniquets, I asked him what made him think of going back to face Russia's overwhelming military force.

"When I saw what Russia was doing to our country, I simply realised that it was my duty," he said.

After Viktor and his friends loaded up their van, they were keen to have a quick look at the sea.

As they were sipping coffees and chatting cheerfully on the promenade, you would never believe they were going into battle. But what they will face in a few days - after a long drive in their van across Europe - is very different from the peaceful seaside in Kent.

Asked on BBC One's Sunday Morning programme if she would support individuals from Britain going over to Ukraine to help in the fight, Ms Truss said: "I do support that, and of course that is something that people can make their own decisions about.

"The people of Ukraine are fighting for freedom and democracy not just for Ukraine, but for whole of Europe because that's what President Putin is challenging." 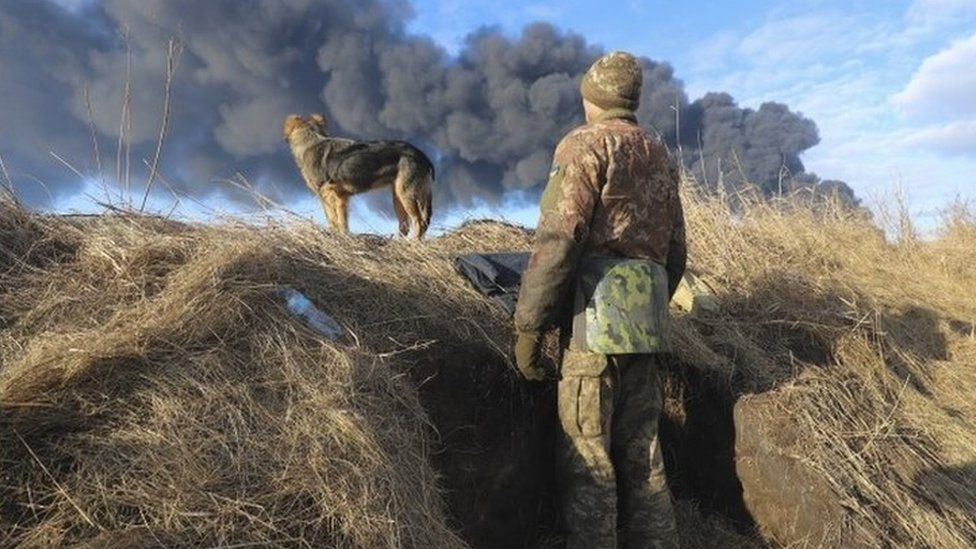 She said the UK government was "doing all it can" to support Ukraine with defensive weapons on the ground and with "far more severe sanctions" against Russia, to stop Putin from funding his "war machine".

"We are seeing a huge united effort, across the G7, across our allies, to challenge Vladimir Putin," she said. "Because this is Putin's war. This is pre-fabricated, pre-ordained aggression to try and subvert a sovereign democracy.

"We simply cannot allow him to succeed."

The foreign secretary said she feared the invasion of Ukraine would be a "bloody and long-running conflict" - with consequences felt far beyond Ukraine itself.

She said the UK "will need to do more [and] spend more" - citing the unprecedented sanctions announced by the government earlier this week, and Saturday's decision by the EU, US and their allies to cut off a number of Russian banks from the main international payment system, Swift.

"The aim is to degrade the Russian economy - to stop the money Putin has used to fund his war machine," she said.

She said the UK government had compiled a "hit list" of Russian billionaires and said there would be a "rolling programme of sanctions" against individual oligarchs.

But Labour's David Lammy called on the government to name those on its hit list - and questioned why there were some being sanctioned by the US but not the UK. Mr Lammy also told the BBC the Russian insurance industry should be targeted by sanctions. 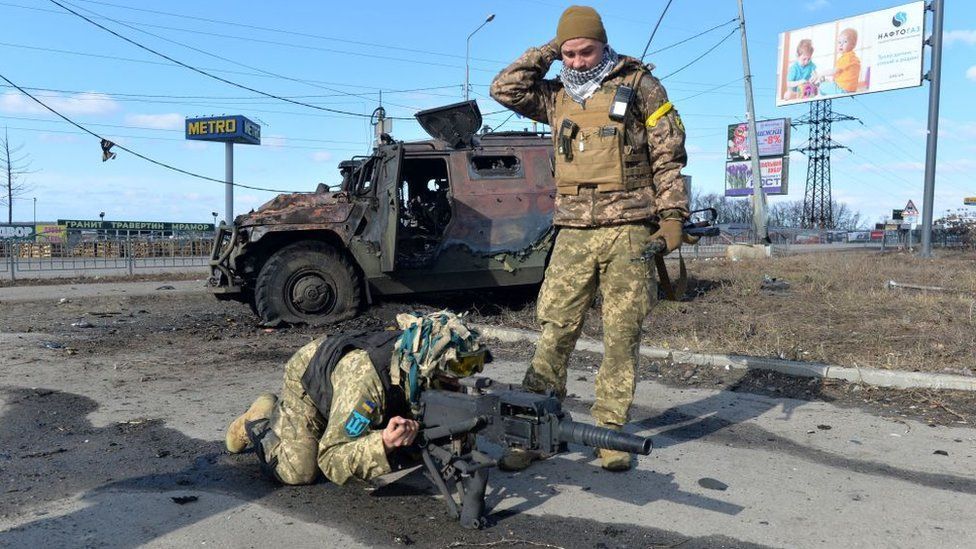 Ms Truss acknowledged that there was likely to be an "economic cost" to the UK "in terms of access to oil and gas markets" - and a likely rise in the cost of living, with the conflict expected to drive energy and fuel prices even higher.

The foreign secretary warned of "dire consequences" if the conflict was allowed to escalate. "I firmly believe that the British public understand the price we will pay if we don't stand up to Putin now".

She told Sky's Trevor Philips the UK and allies needed to be prepared for Russia to use chemical or nuclear warfare, if President Putin's invasion plan looked as if it was failing, adding: "We need to avoid this at all costs."

It comes as President Putin ordered his military command to put nuclear forces on a "special" state of alert in an effort.

Speaking on Saturday, Prime Minister Boris Johnson praised Ukrainians for "fighting heroically" and with "great success" in some places, but said more had to be done to "change the heavy odds that Ukraine faces" from the Russian invasion.

A Ukrainian government official said more than 210 Ukrainian civilians had been killed so far and more than 1,100 wounded in Russia's invasion. The number of people fleeing Ukraine has now reached 368,000, according to the United Nations High Commission for Refugees.