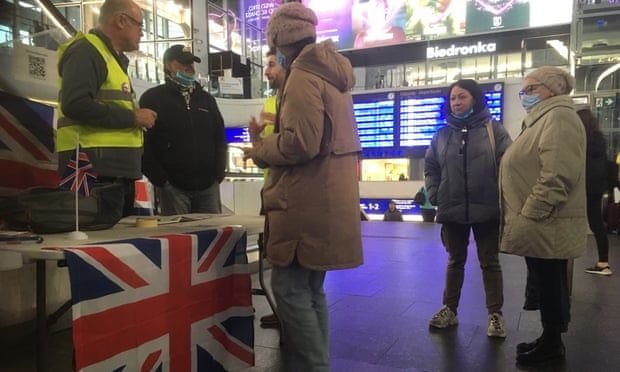 Ukrainians who fled to Poland feel deterred by UK’s complex rules, which are in contrast to EU states’ open borders and free transport

Ukrainian refugees in Poland are frustrated and confused by British asylum rules, which they say appear designed more to keep people out than offer shelter to those fleeing war.

Refugees arriving at Warsaw central station told the Guardian that they were baffled by the UK government’s rules requiring them to find a sponsor in Britain before they could apply for a visa, which could take weeks to be processed. None said they knew anyone in the UK who could sponsor them.

“I think it’s very complicated,” said Katerina Ilasova, who fled her home city of Poltava after the invasion started. “I’ve heard lots of positive things about Britain. But for me it is too complex. So people are signing up to go to other countries that are easier to get to.” 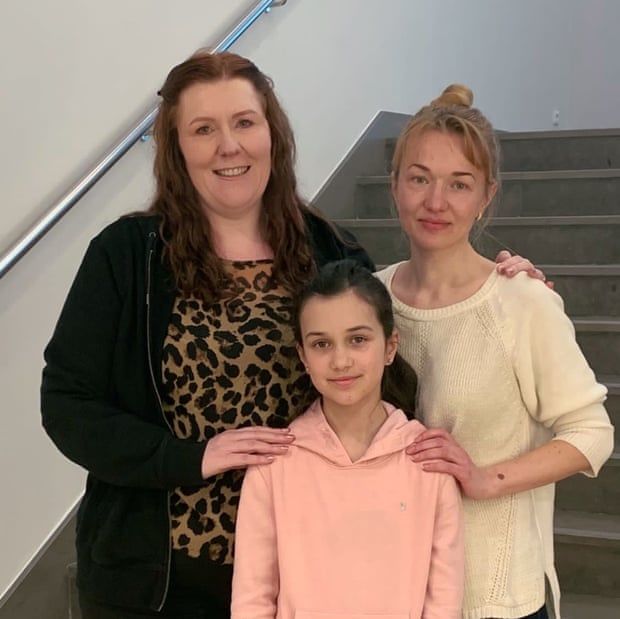 Alyona Vinohradova, right, with her daughter, Kamila, and Terri Shanks, her British host. ‘I don’t know why we can’t bring them in on a tourist visa,’ says Shanks. “The Spanish are scooping them up and worrying about the paperwork later.’

Ivan Yakovlev, who left Dnipro before the war started to work in Georgia, wanted to get to Britain because of the language. “I speak English, my wife speaks English; it will be good for us, simpler to find a job there. But I don’t know what we should do; I don’t have any connections.”

A small team of British people has set up a stall inside Warsaw station to explain the rules to refugees and advise them on how to apply. They have had a handful of successes matching Ukrainians with British sponsors, but their efforts have been dwarfed by those of a Spanish group at a neighbouring stall, who have helped more than 1,000 Ukrainians start their journey to Spain, arranging free transport and hosts at the other end.

“The bottleneck is in the visa system and the matching of refugees with hosts,” said Ed Pinkney, a British Hong Kong-based researcher who has been volunteering at the station for two weeks.

“I’m getting frustrated because it’s wasting time that could have been given to the immediate needs of Ukrainians,” he said. “The logical thing to do would be to get them to the UK and do any checks there.”

Some hopefuls do get lucky. Alyona Vinohradova was fortunate to bump into Terri Shanks, a woman from Berkshire who was in Poland for business. Shanks has offered to host Vinohradova and her 11-year-old daughter, Kamila, once the family’s application has been processed and their visa approved.

“I don’t know why we can’t bring them in on a tourist visa,” says Shanks. “The Spanish are scooping them up and worrying about the paperwork later. We don’t seem to be doing that. It’s ridiculous when there’s a home waiting.”

“I think it’s very complex,” said Vinohradova. “I think the UK is ensuring that all the Ukrainians don’t come.”

Even those like Vinohradova who have been lucky enough to have found a British sponsor will probably have to wait weeks while their visa is processed. The British government stands apart from its European neighbours, which are all offering Ukrainian refugees visa-free travel.

“Since my childhood, I was dreaming of going to England,” said Anna Lazareva, from Sumy in eastern Ukraine, who says she managed to find a sponsor on a Facebook group. Now she is waiting in Warsaw. “It’s already been four days. Hopefully I won’t have to wait much longer.”