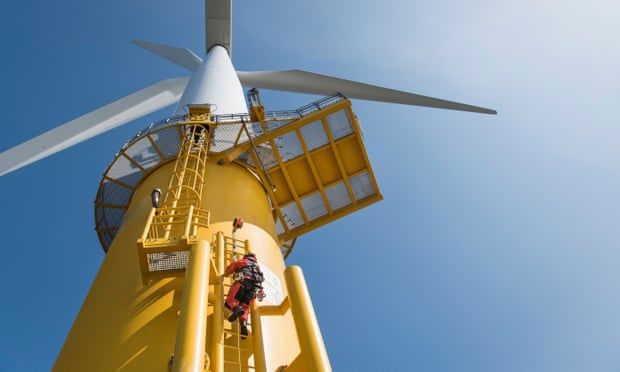 Danger of young people’s futures being blighted by climate and Covid crises, say campaigners
Green apprenticeships would prepare young people for jobs in renewable energy and the restoration of the UK’s natural landscape, and stop young people having their careers blighted for life by the impact of the Covid-19 pandemic, a report says.

The report found that 250,000 green apprenticeships and a network of skills centres at further education colleges could be created with about £10.6bn of government money. Local authorities could create more than 44,000 apprenticeships in London with the right investment, along with about 20,000 in the West Midlands and 14,000 in Greater Manchester.

Other regions also have high potential, as the report found scope for nearly 12,000 apprenticeships in West Yorkshire and 6,400 in the Sheffield area.

About 500,000 young people aged 16 to 24 are out of work, and that number could double when the furlough scheme is withdrawn, according to the report, commissioned by Friends of the Earth from Transition Economics. The authors say the consequences of this past year’s setbacks for young people thrown into unemployment could last for years. If wages remain lower for young people through their working lives, from the “scarring” effect of early unemployment, the cumulative loss to their earnings could reach £39bn over the next 20 years.

The government is under pressure to forge a green recovery from the Covid-19 shock, meet its target of net zero emissions by 2050 and build credibility on the world stage as president of the Cop26 UN climate conference later this year.

Rishi Sunak, the chancellor of the exchequer, has promised green measures including a £22bn investment in a national infrastructure bank, some of which would go to low-carbon projects, and the sale of green bonds to investors.

He said: “The UK is a global leader on tackling climate change, with a clear target to reach net zero by 2050 and a 10-point plan to create green jobs as we transition to a greener future. We’re also launching new competitions that will unlock innovation in renewable energy and help us develop the cutting-edge technology we need to reach net zero.”

However, green campaigners are concerned that the government’s green measures so far in response to the pandemic have been weak, and that concentrating on developing future technology such as hydrogen and nuclear fusion is distracting ministers from creating “shovel-ready” green jobs now through building electric-vehicle charging points, extending broadband networks, insulating homes and restoring natural landscapes, all of which require substantial investment.

The green homes grant, the flagship £2bn programme to insulate homes and subsidies low-carbon heating, has been troubled and may be axed or have its funding withdrawn, while fuel duties will be frozen and investment in other low-carbon projects has been slow.

Denis Fernando, a climate campaigner at Friends of the Earth, urged ministers to consider green apprenticeships as a way of rebuilding the economy on green lines, while engaging young facing unemployment.

“There’s a serious risk that this country is going to leave its young people to a future devastated by the climate crisis and unemployment,” he said. “But it’s not too late to turn this around. Investing in green apprenticeships in areas such as renewable energy and woodland creation could prevent a new wave of youth unemployment, while helping the UK towards a more climate-friendly future.”

Laura Chow, the head of charities at the People’s Postcode Lottery, which supported the research, said: “The steps we take now to tackle climate change can also introduce opportunities for young people. Ending youth unemployment while fighting climate change offers a worthwhile solution to tackling two of the key issues we face.”

The report found that some green apprenticeships were already on offer, but many young people were unaware of them or unable to access them.

Bridie Salmon, who is 22 and from Lincolnshire, is studying for a level 3 BTec National in engineering with support from Orsted, the Danish offshore wind company. “Most apprenticeships offer half of the minimum wage,” she said. “The government should offer grants to support companies to offer minimum wage for apprenticeships. They also need to advocate for green jobs.”
#COVID-19  #Covid
Add Comment