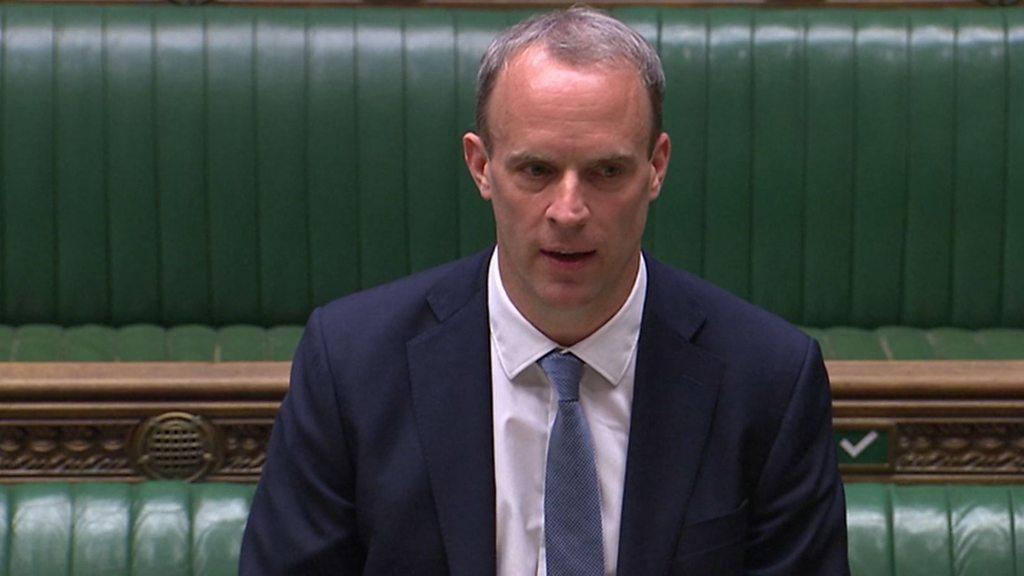 The UK government will suspend its extradition treaty with Hong Kong "immediately and indefinitely".
Announcing the move, Foreign Secretary Dominic Raab said the UK "wants a positive relationship" with China.

But he said the "imposition" of the new security law in Hong Kong by Beijing was a "serious violation" of the country's international obligations.

Labour said it would support changes to the law, calling it a "step in the right direction".

The extradition treaty means that, if someone in Hong Kong is suspected of a crime in the UK, then the British authorities can ask Hong Kong to hand them over to face justice - and vice versa.

The UK fears the arrangement - which has been in place for more than 30 years - could see anyone it extradites to Hong Kong being sent on to China.

Mr Raab also confirmed the government would extend its arms embargo - which has been in place with China since 1989 - to Hong Kong, stopping the UK exporting equipment, such as firearms, smoke grenades and shackles, to the region.

But China has accused the UK government of "brutal meddling", insisting it is committed to upholding international law.

The country also promised a "resolute response" if the UK withdrew from extradition arrangements.


'The UK is watching'

Beijing introduced the security law at the end of June, creating new offences which could see Hong Kong residents sent to mainland China for trial.

Critics said it could see pro-democracy protesters in the region being served with life sentences.

They have also said the law breaches an agreement made with the UK before Hong Kong - a former British colony - was handed over to China in 1997.

Under the 50-year agreement, China enshrined civil liberties - including the right to protest, freedom of speech and the independence of the judiciary - in Hong Kong's Basic Law, an approach which came to be known as "one country, two systems".

Mr Raab told MPs: "There remains considerable uncertainty about the way in which the new national security law will be enforced.

"I would just say this: the UK is watching and the whole world is watching."

The foreign secretary also confirmed plans for a path to UK citizenship for around three million Hong Kong people would be in place by early 2021, in response to the law.

However, Border Force officials have been given the ability to grant leave to any applicants before then.

Political and economic relations between the UK and China have become strained in recent months.

Mr Raab referenced a number of tensions during his speech, including the decision by the UK government to ban Chinese firm Huawei from the country's 5G network.

He told MPs: "We will always protect our vital interests including sensitive infrastructure and we won't accept any investment that compromises our domestic or national security"

The foreign secretary also raised his "grave concerns" about the "gross human rights abuses" taking place in China's Xinjiang region against Uighur Muslims, after reports of forced sterilisation and wider persecution of the group.

He said they had raised the issue with his Chinese counterparts and with the United Nations.

Mr Raab added: "We want a positive relationship with China. There's a huge amount to be gained for both countries, there are many areas, where we can work productively, constructively to mutual benefit together.

"For our part, the UK will work hard and in good faith towards that goal. But we will protect our vital interests, we will stand up for our values, and we will hold China to its international obligations."

The change in the treaty was praised by MPs from other parties.

"This must mark the start of a more strategic approach to China based on an ethical approach to foreign policy and an end to the naivety of the 'golden-era years'," she told MPs.

"Our quarrel is not with the people of China, but the erosion of freedoms in Hong Kong, the actions of the Chinese government in the South China Sea and the appalling treatment of the Uighur people is reason now to act.

"We will not be able to say in future years that we did not know."

But other MPs called for the government to go further.

Tory MP and former defence minister Tobias Ellwood said: "For decades we have turned a blind eye to China's democratic deficit and human rights violations in the hope that it would mature into a global, responsible citizen [but] that clearly hasn't happened.

"Can I ask the secretary of state, is this now the turning point that we drop the pretence the China shares our values, given its actions... [and] can we have a strategic overhaul of our foreign policy in relation to China?"

Mr Raab said the government was carrying out an integrated review about its strategy.
Add Comment