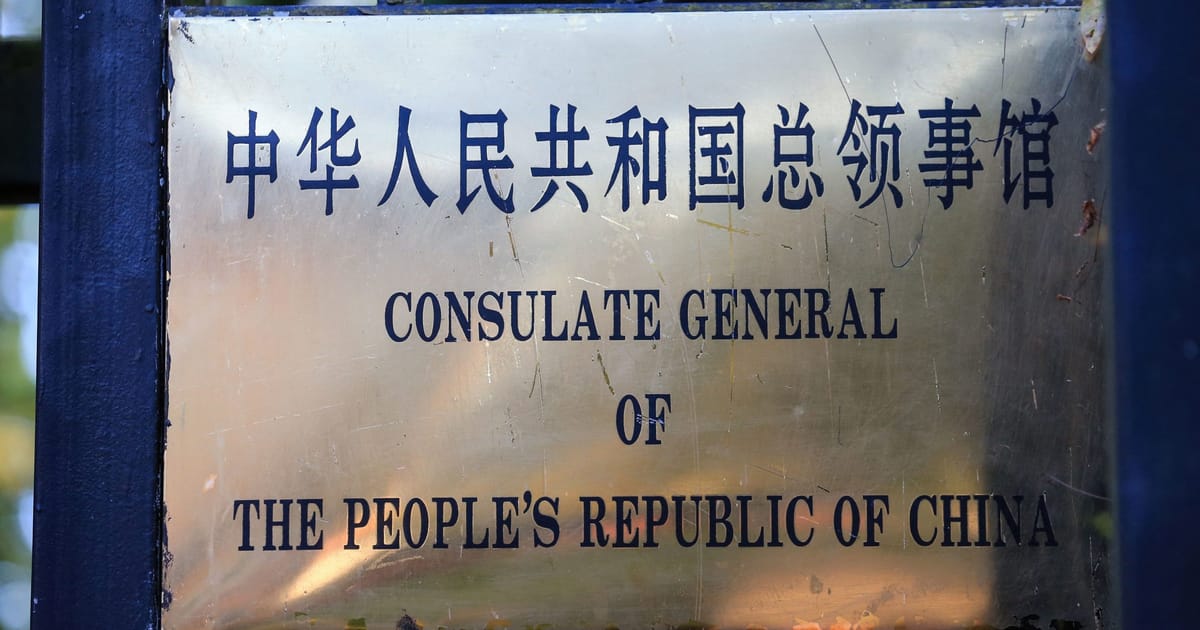 MP accuses Chinese consul general of ripping down street posters during protest violence.
The U.K. has summoned a senior Chinese diplomat for urgent talks after a Hong Kong pro-democracy protester was dragged into the Chinese Consulate grounds in Manchester and violently attacked.

China’s charge d’affaires to London, Yang Xiaoguang, will be grilled by senior U.K. officials at the Foreign, Commonwealth and Development Office (FCDO) Tuesday afternoon after civil servants from the department expressed “deep concern” to the Chinese embassy over the attack, FCDO Minister Jesse Norman told the House of Commons.

Footage from the incident, which happened Sunday, shows unidentified men emerging from the consulate compound, tearing down a satirical portrait of Chinese President Xi Jinping erected by protesters outside and then attacking a protester within the consulate grounds.

Video shows the men landing a series of violent blows upon the protester, who later identified himself to the BBC as “Bob.” He told reporters he was “dragged inside and attacked” before being rescued by police. Greater Manchester Police confirmed his account.

“The foreign secretary has issued a summons to the Chinese charge d’affaires at the Chinese embassy in London to express His Majesty’s Government’s deep concern at the incident, and to demand an explanation for the actions of the consulate staff,” Norman said during an emergency debate granted by Commons Speaker Lindsay Hoyle.

Tory MPs pressured the minister to clarify whether the Chinese consul general and other Chinese officials could be expelled from the U.K. if they are found to have committed an offence under British law. Norman insisted ministers must first wait for a formal investigation by Greater Manchester Police to conclude.

“It’s absolutely right to have a legal procedure that goes through that and examines the question in all its aspects,” he said, adding peaceful protest “is a fundamental part of British society and of our way of life” and that “FCDO officials expressed that clearly to the Chinese embassy.”

The debate was requested by Alicia Kearns, newly elected chair of the Commons foreign affairs committee, who described the incident as a “chilling escalation” of tensions between the two sides.

She directly accused the Chinese consul general of “ripping down posters” and described the attack which followed as “grievous bodily harm” against a Hong Kong protester by “officials who have been recognized as member[s] of the Chinese Communist Party.”

“We cannot allow the CCP to import the beating of protesters” to British soil, she added.

The Chinese government also responded to the incident Tuesday, but blamed “troublemakers” who it claimed had entered the consulate “illegally.”

Chinese Foreign Ministry spokesman Wang Wenbin said China will not tolerate the “violation of the peace and dignity of China’s overseas embassies and consulates.”

“The troublemakers illegally entered the Chinese Consulate-General in Manchester, endangering the security of the premises,” Wang said at a daily press briefing.

He urged the U.K. to “earnestly fulfil its duties and take effective measures to step up protection of the premises and personnel of the Chinese embassy and consulates.”
Add Comment