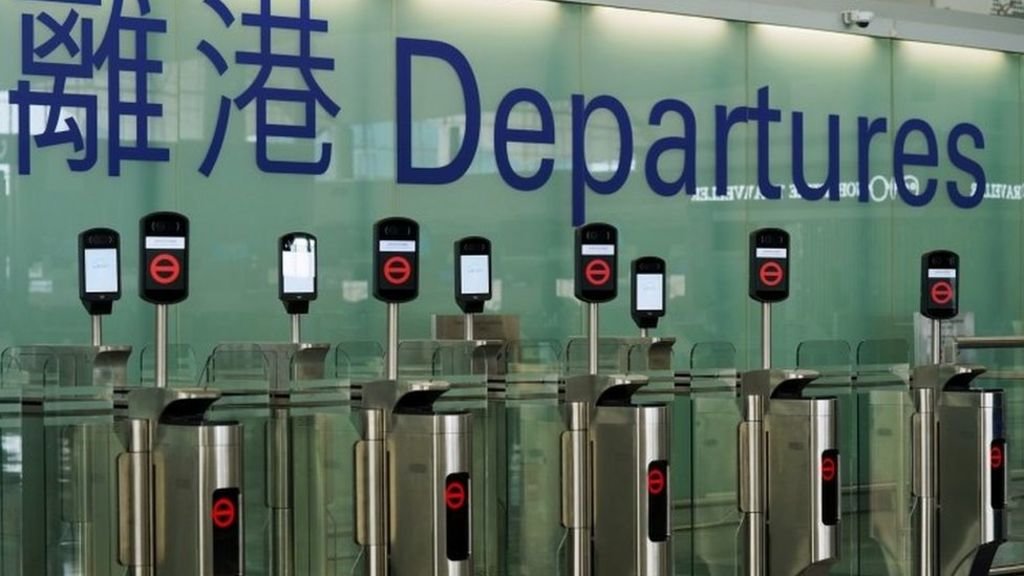 The UK will not "look the other way" on Hong Kongers with British National (Overseas) status, No 10 says, amid a row with China over a new visa.

From Sunday Hong Kong citizens with BNO status can apply for a special UK visa.

But China's foreign ministry has been critical of the move, saying "while the UK may be in dire need of talents" it should not have used the BNO passport as a "political cover-up".

It said it will no longer recognise the BNO passport as a travel document.

About 300,000 people are expected to leave Hong Kong for Britain using the route.

The visa was announced in July after China imposed a new security law in Hong Kong.

Those who apply and secure the visa will be able to apply for settlement after five years and then British citizenship after a further 12 months.
The prime minister's official spokesman said: "We have been clear that we will not look the other way when it comes to Hong Kong people with British National (Overseas) status who now have a choice to come and live and work and study in the UK.

"And it remains the case that BNOs and their families can use documentation other than BNO passports to travel and enter the UK."

A UK Foreign, Commonwealth and Development Office spokesman said they were "disappointed but not surprised" by China's decision not to recognise BNO passports.

The comments came after Chinese foreign ministry spokesman Zhao Lijian told a daily briefing the "attempt to turn a large number of Hong Kong people into second-class British citizens" had "completely changed the nature of the two sides' original understanding of BNO".

A statement from China's Ministry of Foreign Affairs said: "Apart from serving its political agenda, the move of the British side will also bring huge economic interests to the country. While the UK may be in dire need of talents and capital, it should not have made use of the BNO passport as a 'political cover-up'."

China has also said the BNO passport will not be accepted as proof of identity and they "reserve the right to take further measures".

Hong Kongers use their own Hong Kong passport or ID card to leave the city. To enter mainland China, they need to use their Home Return Permit, issued by Chinese immigration, unless they use a full foreign passport and apply for a visa to enter as a foreigner.

The only time they might use a BNO is upon arrival into the UK, or another country that recognises the document.
line

On one level the row between China and the UK over British National Overseas passports is symbolic.

Beijing dislikes Britain making it easier for BNOs to come to live in the UK.

It promised retaliation. So it is refusing to recognise BNO passports.

But many BNOs also hold Hong Kong passports and anyway, they don't need a BNO passport to apply for the new UK visa, just BNO status.

So, inconvenient but not game changing.

But on another level, the row could be the start of things to come.

There are reports that BNOs could be banned from holding public office.

Could their voting rights be curbed? Could further measures be put in place that do make it harder to leave Hong Kong?

China's foreign ministry spokesman said it reserved the right to take further actions, so the chances of this row intensifying are real.

The British government is determined to live up to what it sees as a moral duty to protect BNOs.

And the Chinese government is determined to prevent a potentially damaging emigration from Hong Kong.

About 7,000 people from Hong Kong have already been allowed to settle in the UK since July, the Home Office said.

Although there are 2.9 million citizens eligible to move to the UK, with a further estimated 2.3 million dependants, the government expects about 300,000 people to take up the offer in the first five years.

The 7,000 who have already arrived were allowed to settle before the scheme began by being granted Leave Outside the Rules, which gives the government discretion over immigration rules on compassionate grounds.

Those eligible for the new visa can apply online and will need to book an appointment to attend a visa application centre.

And from 23 February, BNO status holders who hold an eligible biometric passport will be able to use an app to complete their application from home.

Home Secretary Priti Patel said the mobile phone app was to give applicants greater security amid fears they could be identified and targeted by the authorities.

"Safeguarding individuals' freedoms, liberty and security is absolutely vital for those individuals that go through this process," she said.

The BNO status was created before the UK handed responsibility for Hong Kong back to China in 1997.

Before Hong Kong was returned, the UK and China made an agreement to introduce "one country, two systems", which meant, among other things, rights such as freedom of assembly, free speech and freedom of the press would be protected.

But the UK has said this agreement - known as the Joint Declaration - is under threat because the territory passed a new law in June that gives China sweeping new controls over the people of Hong Kong.

China has said the law is necessary to prevent the type of protests seen in Hong Kong during much of 2019. However, the law has caused alarm both in Hong Kong and abroad, with opponents saying it erodes the territory's freedoms as a semi-autonomous region of China.

Duncan Newton 74 days ago
How stupid are you? When the Chinese "promised" to treat the ex-Hong Kongers with equity... you believed them. Then you packed your flag and your bags, went home, and left them hanging. Travel to Vancouver in Canada. You will instantly find out why they call it Hong Couver. That's where the people that could afford to get out did that, ahead of the mainlander's invasion.
View all comments (1)Add comment