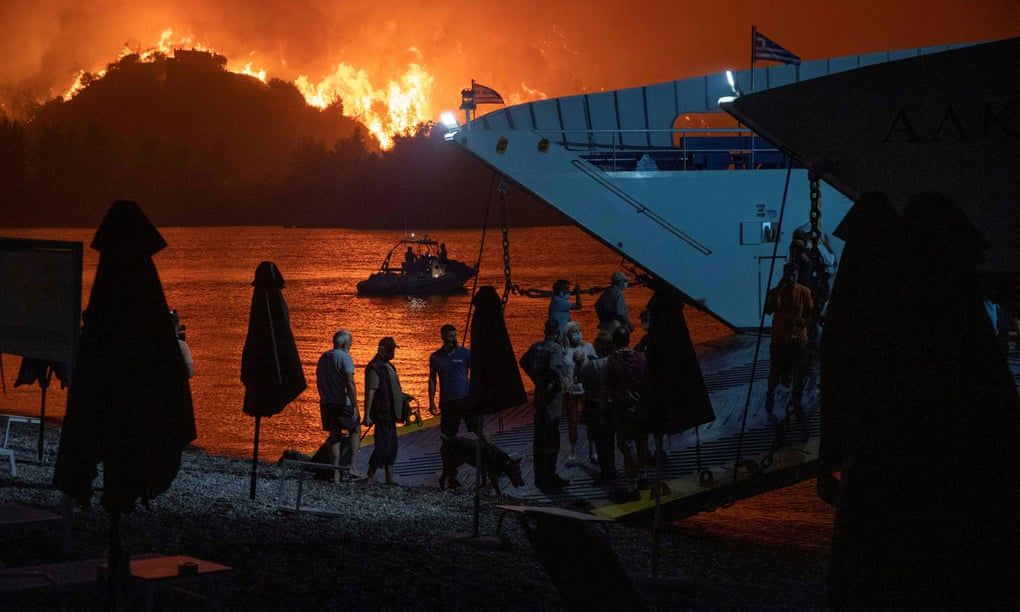 UK sends firefighters to Greece to help the battle against wildfires

At least 400 wildfires are raging across the country, which have killed one and injured 20 so far

British firefighters are to be sent to Greece this weekend to lend their support in the battle against wildfires that have spiralled out of control over the past few days.

Teams from Merseyside, Lancashire, south Wales, London and the West Midlands fire services are due to fly out to Athens this weekend, while France said it would provide a further three aircraft and 80 firefighters to join the hundreds that had already been sent.

More than 400 wildfires have broken out across Greece in the last 24 hours, with the island of Evia and areas of the Peloponnese region particularly badly affected.

The home secretary, Priti Patel, who visited Greece earlier this week, said she had asked the National Fire Chiefs Council (NFCC) to deploy specialists who will join the frantic response to the country’s worst wildfires in three decades, which have killed a volunteer firefighter and injured at least 20 people.

In a tweet on Saturday evening, Patel said: “We are sending a team of experienced firefighters to support Greek firefighters currently battling the huge blazes. When I visited my Greek counterparts earlier this week, I saw the devastating effect the fires are having. The UK stands with you.”

Mark Hardingham, the chair of the NFCC, said: “The UK Fire and Rescue Service will be offering support to our colleagues in Greece, along with their communities who need assistance during these devastating wildfires.

“NFCC’s National Resilience function is in place to deploy both in the UK and overseas – and the team is highly skilled at responding to extreme events such as these.

“We can offer professional and technical skills to our fire family in Greece at a time when help is needed; it is ingrained in the professional nature of FRS staff to assist.”

France’s president, Emmanuel Macron, tweeted on Saturday: “France stands by Greece, which is suffering greatly from catastrophic fires. After discussion with the Prime Minister [Kyriakos Mitsotakis], 3 Canadairs and 80 French firefighters and rescuers were deployed in Greece [to assist] with urgent procedures. Solidarity, as Europeans, always.” 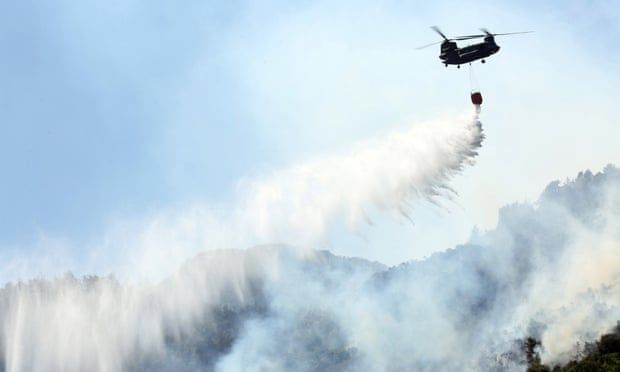 A Chinook helicopter douses a wildfire in Malakassa, near Athens on Saturday.

A large fire in the northern outskirts of Athens, which was initially believed to be under control but had expanded again on late Thursday

But already erratic winds that had fanned the flames into quickly changing directions were forecast to strengthen, meaning a significant threat remained that the blaze would worsen again.

By Saturday evening fires were burning uncontrollably on Evia, the island east of Athens, where villagers under order to evacuate were calling for planes to airlift them from communities surrounded by flames. Local mayors, echoing the anxiety of panic-stricken residents, blasted authorities for the inadequate help they had received in the face of winds fanning flames across the island.

“There isn’t a village that hasn’t burned in our municipality,” Giorgos Tsapournioti, the mayor of Mantoudi in the island’s fire-afflicted north, told SKAI TV. “More than 400,000 stremmata of forest has been reduced to cinders. For five days I’ve been shouting, constantly appealing for help, and the help we’ve received on land hasn’t been enough, neither of course the assistance by air.”

Further south in the Peloponnese, fires that had previously been brought under control were raging across the region of Ilia where residents were also urged to evacuate their homes. Flames were inching ever closer to the site of ancient Olympia, while villagers in Nemouta were reported to be desperately clearing brushwood and pruning trees in a bid to save their properties from incineration. Firefighters were also battling fire fronts in areas across Arcadia.

On the outskirts of Athens, where blazes appeared to have been tamed north of the capital, residents who had fled infernos earlier in the week were allowed to return to their destroyed homes.

The government, which has vowed to reforest fire-ravaged woodlands, has been putting up victims in hotels.

The unprecedented temperatures that have afflicted Greece, in a prolonged heatwave that began 11 days ago, dropped on Friday, but are set to increase again early next week.

More than 800 firefighters, including support crews from Cyprus, France and Israel, have been fighting the blaze north of Athens, assisted by the army and water-dropping aeroplanes.

“Under no circumstances can we be complacent,” deputy civil protection minister Nikos Hardalias said during an emergency briefing. “We are fighting a very big battle.”