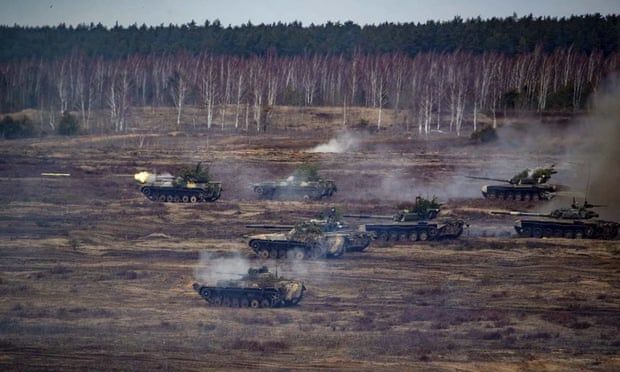 The claim, made on Monday, is understood to be based on western intelligence

Britain believes there are figures within Russian military and security services who have “serious doubts” about invading Ukraine as the Kremlin continues to move more troops within 50km of the border.

The claim, made on Monday, is understood to be based on western intelligence, although the concerns that exist are not expected to have any initial impact if President Vladimir Putin were to order an attack.

“There are elements within the military and Russian security services who harbour very serious doubts about the plan to invade and its effectiveness,” said one western official, who added they were “perfectly confident” about the assessment.

However, no further evidence was offered to back up the statement, one of a number of intelligence-led warnings made by the US, UK and others in the past fortnight, all part of a wider political effort to try to demonstrate that the west has an understanding of Russia, its plans and intentions.

Any invasion of Ukraine would be fraught with risk, in what would be the largest war in Europe since the second world war. It would pit 150,000 Russian troops, plus another 30,000 separatists, against a regular Ukrainian army of 145,000 plus tens of thousands of paramilitaries, many of whom have military experience.

But Putin’s dominance of the Russian political and security scene has meant that any internal concerns about an invasion has been muted.

Downing Street said on Monday that there still remained a “window for diplomacy” to resolve the crisis, but added that repeated complaints by the Kremlin that Ukraine had engaged in military provocations in the eastern Donbas region had suggested a plan to attack had already been decided upon.

“Intelligence we are seeing suggests Russia intends to launch an invasion and President Putin’s plan has in effect already begun,” a No 10 spokesperson said. “We are seeing elements of the Russian playbook we would expect to see in those situations starting to play out in real time.”

The western assessment is that Russian forces are now “poised to invade” if Putin gives the order. It is estimated two-thirds of Russia’s 110 battalions in the region have taken up positions within 50km of the border in both Russian and neighbouring Belarus, an increase from half a week ago.

Half of those two-thirds are “tactically deployed” in temporary or makeshift locations even close to Ukraine, where they are awaiting further orders. Defence sources said they could stay in position “for a matter of days” before having to retreat to nearby staging areas, with better facilities.

The defence secretary, Ben Wallace, said that the continued build up of Russian forces monitored by western intelligence did not suggest that the Kremlin was ready to ease tensions. “These are not the actions of a Russian government fulfilling its repeated declarations that it has no intention of invading Ukraine,” he told MPs.

Updating MPs, the minister said there had been “a proliferation of false flag operations and propaganda stunts and Russian news outlets carrying fictitious allegations”.

Russian officials said five “saboteurs” who tried to breach its border with Ukraine have been killed in the Rostov region were killed. Ukrainian armed vehicles were also destroyed, Russia said.

Ukraine said its forces were not operating in the Rostov region and that such claims were “fake news”. Western officials added that Russia had access to a supply of Ukrainian military vehicles captured in 2014-15, when fighting between the two countries was at its most intense, which were available for “false flag” operations.

British sources also sounded a note of caution about the efforts of France’s President Emmanuel Macron on Sunday to set up a summit meeting between US president Joe Biden and Putin, arguing that Ukraine had to be closely involved if there were to be direct negotiations between the two leaders.

A UK government source said it was “too early” to say whether the summit was a good idea although opportunities for diplomacy were welcome. “We need to make sure Ukraine is played in and we have our set position on Ukraine’s sovereignty and their right to choose on things like Nato and that will remain,” they added.