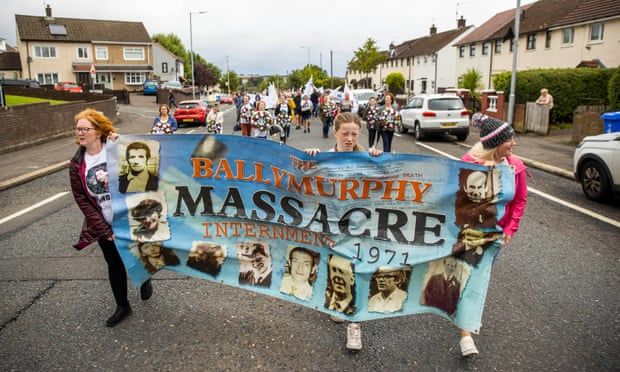 Criticism of move to end prosecutions says it is broader than almost 300 other amnesties around world
The UK government’s plan to end all Troubles-era prosecutions in Northern Ireland would create an amnesty wider than the one Augusto Pinochet introduced to shield human rights violators in Chile, according to a study.

Downing Street’s plan would offer a level of impunity more sweeping than almost 300 other post-conflict amnesties introduced around the world, said the report, published on Tuesday.

The blistering critique came in a joint study by legal experts at Queen’s University Belfast and a Belfast-based advocacy group, the Committee on the Administration of Justice (CAJ).

“The effect of the proposed UK government amnesty would be to prevent not only criminal prosecutions but also to close down current or future investigations in the civil courts, in coronial inquests or police ombudsman investigations – all of which would be closed off to families,” said Louise Mallinder, a law professor at Queen’s.

“I have been working on amnesties around the world for almost 20 years and I have analysed almost 300 amnesties related to conflict and peace from 1990 until 2016. The proposed UK amnesty would offer the broadest form of impunity of all the amnesties surveyed.”

The amnesty introduced by Pinochet, Chile’s late dictator, was often regarded as one of the worst but it applied to just five years and excluded certain crimes, such as sexual violence, and cases already before the courts, said Mallinder.

The British plan in contrast excluded no crimes, had no temporal limits and would shut down cases already in the system. “In other words, the proposed UK amnesty is Pinochet-plus.”

The Irish government, victims’ rights groups and all Northern Ireland’s political parties – a rare unity of unionists and nationalists – oppose the government plan, which would cover more than 3,500 violent deaths during the Troubles, which lasted from 1969 to 1998.

It is widely viewed as an attempt to shield British army veterans and to appease their supporters in the Conservative party and rightwing press.

The government outlined the de facto amnesty – which would apply to paramilitaries as well as security force veterans – in a command paper on legacy, which is expected to form the basis of a Westminster bill.

The 69-page report published on Tuesday benchmarked the command paper against binding international and domestic human rights law, the Good Friday agreement and amnesty processes around the world.

Daniel Holder, the deputy director of the CAJ, criticised the proposal to replace families’ ability to seek truth through the courts and police investigations with a new information recovery body. “The proposed IRB will have far more limited powers, essentially limiting it to a desktop review of papers and taking voluntary statements.”
Add Comment