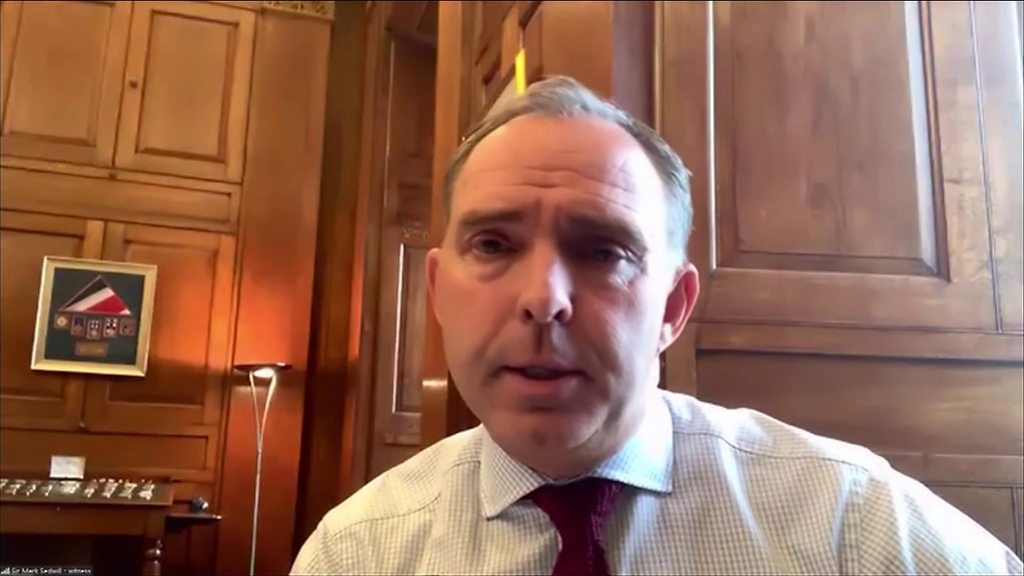 The UK's top civil servant will receive a payout of almost £250,000 when he steps down in September.

His exit follows reports of tensions between him and senior members of Mr Johnson's team in Downing Street.

On Wednesday, the PM signed off the £248,189 pension contribution.

The amount was recommended by Cabinet Office Permanent Secretary Alex Chisholm, with advice from Civil Service Human Resources and legal advisers, before being agreed by Mr Johnson.

In a note from No 10, the PM said the payment was "likely to be in the form of a pension contribution" for Sir Mark.

Earlier on Wednesday, Sir Mark told the National Security Strategy Committee he had not "resigned" but left his post "by agreement" with the PM.

"We had concluded it was time to split the jobs again and have a separate security adviser and separate cabinet secretary," he added.

Sir Mark said the timing was "at his initiative", as it was "never my intention to do that [job] long-term", but the departure was "entirely amicable".

The UK's chief negotiator in post-Brexit trade talks with the EU, David Frost, will take over as national security adviser as a political appointee.

The Cabinet Office has published a job advert for the cabinet secretary position, with a salary of £200,000, and the role is open to current and former permanent secretaries.

The person who gets the position will advise the prime minister on implementing policy and the conduct of government.

Dominic Cummings, regarded as the prime minister's most influential political adviser, has long called for an overhaul of the civil service.

Sir Mark is a career diplomat who served as Ambassador to Afghanistan during a 20-year career in the Foreign Office, before working alongside former Prime Minister Theresa May as the most senior civil servant in the Home Office.

He took over as cabinet secretary at short notice following Sir Jeremy Heywood's death in November 2018.

Asked about reports of anonymous briefings from Downing Street against him, Sir Mark told the committee that civil servants had become "fair game" and it "goes with the territory".

He added: "It is never pleasant to find oneself, particularly as an official, in the midst of stories of that kind.

"I don't think it is ever pleasant in government, whether it is against ministers, between them and particularly against officials, when you have briefings to which you cannot really reply, particularly those that are off the record and sniping away.

"But it is a regrettable feature of modern politics, I'm afraid."

After he leaves government service in September, Sir Mark will be made a peer and will chair a new panel on global economic security when the UK assumes the presidency of the G7 economic group of nations.