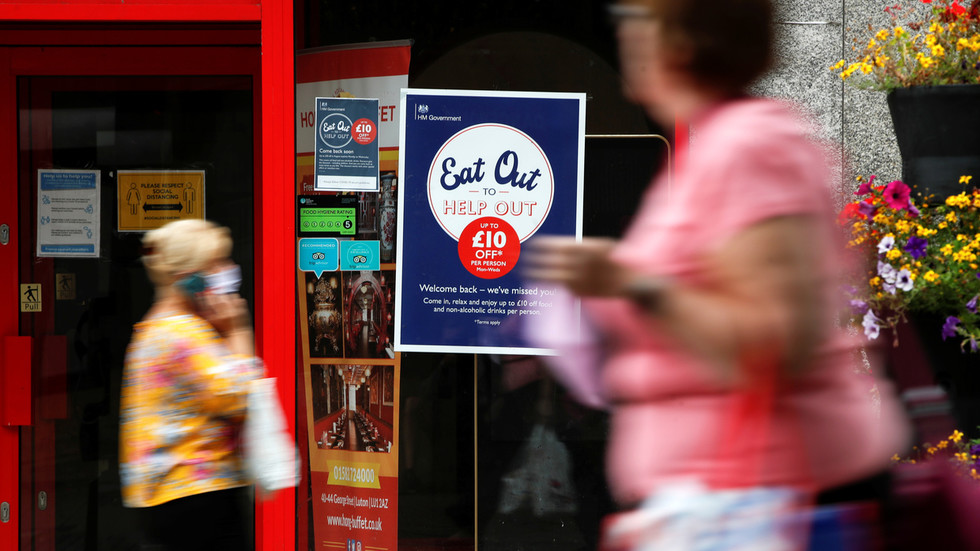 British Chancellor Rishi Sunak’s ‘Eat Out To Help Out’ scheme was behind a spike in Covid-19 cases in the UK that contributed to the second wave of the virus, according to a new study by the University of Warwick.
In an attempt to boost the UK economy after the country’s first national lockdown, the British government created a discount scheme, through which diners would receive a 50 percent discount, up to the value of £10 per head, on meals purchased between Mondays and Wednesdays throughout the month of August.

While the discounts did encourage more people to attend restaurants, with more than 100 million meals getting eaten through the scheme, it failed to secure the desired boost to economic growth. UK GDP slowed in August, only rising by 2.1 percent. Instead, it appears to have boosted the spread of the virus, with eight percent to 17 percent of newly detected infection clusters being linked to the scheme, according to a recent study.

Dr Thiemo Fetzer, author of the paper ‘Subsidising the spread of Covid-19: Evidence from the UK’s Eat Out to Help Out scheme,’ warned that the “indirect economic and public health costs” of the new Covid clusters could ultimately “vastly outstrip [the scheme’s] short-term economic benefits.”

A spokesman for the UK Treasury refuted the claims made in the study, ruling out any link between the spike in infections and the discount scheme by the argument that other countries in Europe are experiencing similar Covid spikes “irrespective of whether similar measures for the hospitality industry have been introduced.”

The study reflects the challenges that governments face in balancing reopening their economies and protecting citizens from the spread of coronavirus, as Europe battles a second wave of coronavirus that has already pushed Ireland, France and Germany into new national lockdowns.
The UK has, so far, avoided another national lockdown and instead introduced a three-tiered system of local coronavirus restrictions. The country has reported 467,512 cases and 45,955 deaths from coronavirus, as of October 30, 2020.
#Coronavirus  #COVID-19  #Covid
Add Comment