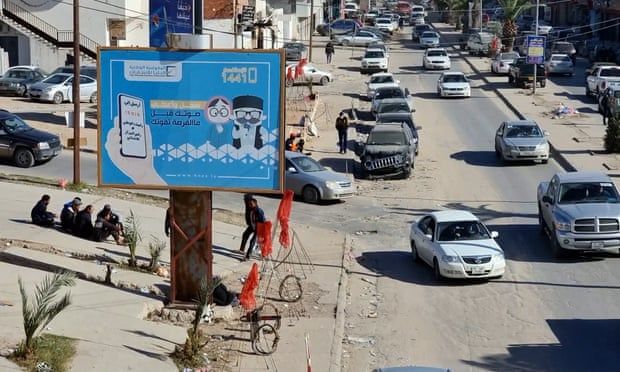 Parliamentary committee accuses ambassador of interference over tweet in support of recognising interim government
Libya’s political crisis has taken on an increasingly international dimension after the UK was accused of defending corruption and interfering in internal processes by calling for the interim government to remain in power pending the rescheduling of delayed elections.

The country’s first presidential elections, scheduled for 24 December, were indefinitely postponed at the last minute, largely because fierce disagreements over who should be allowed to stand had not been resolved.

On the day the vote should have taken place, the UK in Libya Twitter account published a message saying it continued to recognise the interim government of national unity “as the authority tasked with leading Libya to elections and does not endorse the establishment of parallel governments or institutions”.

In response the foreign affairs committee of the House of Representatives, Libya’s parliament, accused the UK ambassador, Caroline Hurndall, of violating diplomatic norms and unwarranted interference. The committee said only the House of Representatives – which has been accused of seeking to delay and even disrupt any elections – could decide on the role of the interim government. Some tribes went further, calling for Hurndall to be expelled.

Fathi Bashagha, a presidential candidate and former interior minister, said: “Corruption is leading Libya to bankruptcy. We want to ask Britain a question: why does the British government apply the best anticorruption standards in its country, and want to protect corruption in Libya? Why is Britain defending the government and financial institutions in Libya?”

The vote was intended to mark a fresh start for the oil-rich country, a year after a landmark ceasefire and more than a decade after its 2011 revolt that toppled and killed the dictator Muammar Gaddafi. Libya’s parliament is to meet on Monday to debate a new timeline and discuss the mandate of the current interim government, which was meant to end on Friday with the elections.

Various factions and international powers are jockeying for position, amid concerns the political vacuum will lead to the resumption of fighting.

The Tripoli-based unity administration is headed by Abdul Hamid Dbeibah, a tycoon who wants to run for president even though he pledged not to when he took up his current post. Analysts have suggested his rivals may wish to exploit the delay in order to put him out of the picture.

Two other would-be candidates are particularly controversial: Gaddafi’s son Saif al-Islam Gaddafi, a divisive symbol of the old regime who is wanted by the international criminal court over war crimes allegations, and the warlord Khalifa Haftar, whose eastern-based forces staged a 16-month siege of Tripoli before last year’s ceasefire.

The dispute over candidates’ eligibility reflects a deeper east-west disunity that has not been resolved. Haftar has been credited at various times with the support of Egypt and the United Arab Emirates and has been opposed by Turkey, which has backed militias from the west defending Tripoli with fighters and arms.

It was not clear why the UK was singled out for such strong criticism given that a joint statement issued by the UK, France, Germany, Italy and the US also called for the current interim government to remain in power pending swiftly reorganised elections.

In an apparent reference to Dbeibah, the statement said: “To avoid conflicts of interests and to promote a level playing field, candidates holding roles in public institutions should also continue vacating them until the announcement of the electoral results.”

The western powers said they also backed the UN’s “call for disagreements on emerging political or military matters to be resolved without resorting to violence. We stand ready to hold to account those who threaten the stability or undermine the political and electoral process in Libya.”

Najla El-Mangoush, the interim government’s foreign minister, appeared to slow the drive to elections by saying national unity was a precondition.

“At this crucial moment in the history of Libya, we, Libyans and the international community, must realise that elections are a tool to achieve stability and not a specific goal,” she tweeted. “The elections should be based on the principle of reconciliation, a constitutional basis, and the unification of institutions.”

Some observers have long doubted whether free elections are feasible in a country in which as many as 20,000 foreign forces including mercenaries are on the loose.

Referencing protests over the postponement, Fadel Lamen, another presidential candidate, tweeted: “The demonstrations in Benghazi and Tripoli on Saturday are a real testimony to the will of the people and their insistence to have their voices heard and their votes counted. They voted with their feet to make sure that nobody domestic or intentional can deprive them.”
Add Comment