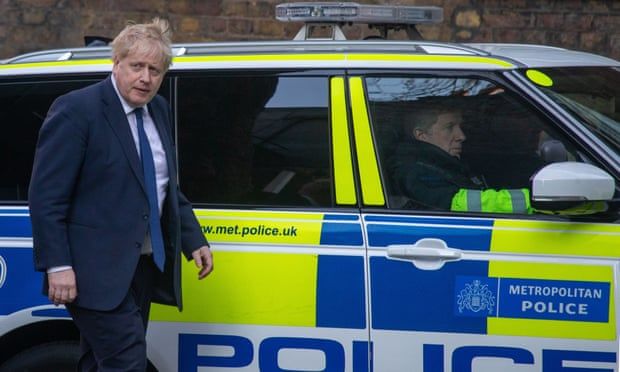 Government polling finds a high fear of crime and little confidence anything will be done about it
The public do not believe ministers’ promises to tackle crime, official documents seen by the Guardian show.

The Home Office documents reveal polling carried out for the government found a high fear of crime, and low confidence much will be done about it.

The leak reveals people are not convinced by a series of flagship initiatives by Boris Johnson’s administration on law on order, such as the “beating crime plan”.

It comes despite government efforts to distance itself from a decade of Conservative cuts to the police and the criminal justice system.

Only one in three of those polled had faith it could tackle crime, its own document notes: “Current initiatives to tackle crime are not cutting through to the public – only around a third (35%) say they have confidence in the government’s handling of crime and justice, and awareness of the beating crime plan is low.”

Boris Johnson has trumpeted his anti-crime credentials but the government’s own polling, taken after weeks of furore over Partygate and government untruths, shows the public were disbelieving.

Johnson has been keen to claim that under his government crime has been falling, falsely claiming in February that it had decreased by 14%. The statistics watchdog rebuked him, finding the figures had been presented in a misleading way.

The Home Office document says: “While crime isn’t necessarily the most ‘top-of-mind’ concern for the public, it’s a constant undercurrent and, when asked, people feel very strongly about it.

“Our most recent polling (conducted Feb 2022) shows that 61% think that crime is going up nationally, and 51% are worried about becoming a victim of crime.”

The document adds: “Perceptions of crime and levels of concern are largely driven by anecdotal experiences and high-profile media cases. At a national level, the public are particularly concerned about violent crime such as knife crime and people using/dealing drugs and can point to examples in their own lives or the news that back up these worries.”

The document shows the damage the Conservatives did to their reputation on law and order by slashing police numbers by 20,000. The cuts from 2010 continue to reverberate with voters. “Concerns are exacerbated by a perceived lack of deterrents (eg lack of police resources, inconsistent sentencing) for perpetrators of crime,” the document says.

It also notes a generational divide in how to combat crime, with younger people more willing to tackle underlying causes of offending and give people a second chance, while older people back a more traditional approach of high sentences and prison: “However, there are some differences in opinion over the most appropriate approach to tackling crime, with younger groups tending to favour rehabilitation and older adults leaning towards a more punitive approach.”

The planned response to lack of public confidence planned by ministers is not any policy changes, but a public relations campaign to convince voters the government can tackle crime.

In a section on communications objectives, it says it wants to boost the numbers of those believing police “have the funding and resources they need”.

Currently the government is funding 20,000 new officers, to replace those cut by the Conservatives, and is on track to meet its promise.

Other objectives set out in the document to improve public opinion of the government includes getting increased agreement “government is taking action to tackle crime”, dealing with the causes and “increased confidence in the government’s handling of crime and justice”.

Labour’s home affairs spokesperson, Yvette Cooper, told the Guardian: “Crime is up, prosecutions have plummeted, criminals are getting off and victims and communities are being let down.

“The Conservatives are completely failing in the basic tasks of any government – to keep communities safe and deliver justice. That’s why people don’t have confidence in the Conservative government on crime.

“If Priti Patel’s response to this incredibly serious problem is a PR campaign that is a total disgrace and shows just how out of touch she is with the realities of people’s lives.”

The Home Office declined to comment before the publication of this story, but later said: “The latest statistics show that knife crime is down 10% and firearm offences by 9% in the year ending September 2021, and we are over half way to our target of recruiting 20,000 additional police officers by 2023. But we know there is more to do.

“We are bringing in new powers for the police through our police, crime, sentencing and courts bill and last week announced a further £130m to tackle serious violent crime.”

If fraud and computer misuse is excluded, crime fell 14%, with theft decreasing by 18%.

Richard Garside, the director of the Centre for Crime and Justice Studies, said low conviction rates and Partygate were sapping confidence in the government’s competence on crime.

He said: “A government seemingly indifferent to obeying its own rules should hardly be surprised if many members of the public don’t have confidence in its approach to crime.”
#Boris Johnson  #Priti Patel  #Johnson
Add Comment