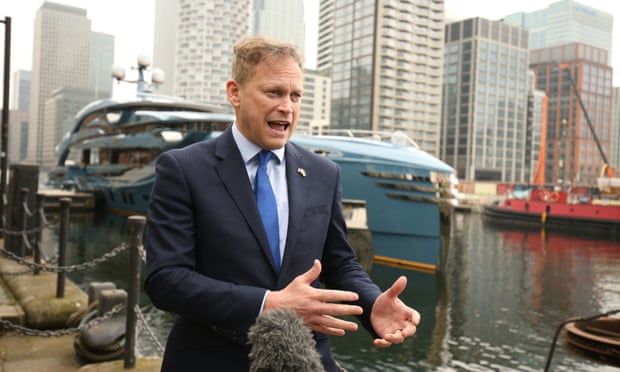 UK prevents use of private jet linked to Russian oligarchs

After recent seizures of aircraft and yacht, Grant Shapps grounds plane at Luton airport pending investigation
The transport minister, Grant Shapps, has said he has prevented the use of another private jet that has links to Russian oligarchs.

Shapps tweeted on Saturday: “We won’t stand by and watch those who’ve made millions through [Russian president Vladimir] Putin’s patronage live their lives in peace as innocent blood is shed.”

The aircraft will remain at the airport while officials investigate further whether it falls under the recent sanctions legislation banning all aircraft connected with Russia, after its invasion of Ukraine.

The DfT said it would not be commenting on the aircraft’s ownership while it investigates.

Shvidler is a former boss and shareholder in Abramovich’s steel company, Evraz, and is thought to be worth an estimated £1.2bn.

New laws were introduced after the Russian invasion of Ukraine on 24 February. Russian airlines and private jets have been banned from landing in the UK, along with a block on any aircraft owned, operated or chartered by anyone connected with Russia.

Other rules mean that other forms of transport thought to be connected to Putin’s regime can be seized.

On Tuesday morning, a £38m superyacht, Phi, was impounded in Canary Wharf, east London. It had arrived in the capital for the World Superyacht Awards. Shapps turned up with a TV crew shortly after police boarded the boat.

It later emerged that it was owned by Vitaly Vasilievich Kochetkov, who is not on the UK sanctions list. The ship was registered in Saint Kitts and Nevis, but sailed under the Maltese flag.

A government source told the FT: “This yacht detention is the product of weeks of inquiries, spanning the world, by the National Crime Agency and other agencies. The ownership of many of these vessels and private aircraft is buried in shell companies or shielded by pretend owners. It is the oligarch equivalent of the Russian matryoshka doll – where each layer conceals another, and then another.”
Add Comment